Me and My Boys 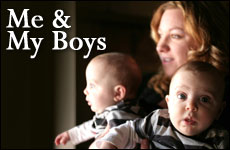 The question no one asks: "What was it like to get divorced with two children still in diapers?"

My two boys are very close in age -- 16 months apart, to be exact. When people see them for the first time, they sometimes ask me if they’re twins, even though they look nothing alike. And I say no, but close enough, and we discuss the blessings and trials of having two children so close in age.

The thing that no one ever asks, though, is what was it like to get divorced with two children still in diapers. How did I explain to two children who were both under three and a half that their father wasn’t coming back, and our life had just been turned completely upside down? How did I manage to stay level-headed enough to feed them every morning and put them to sleep every night when my whole life had crumbled to bits around me and there was no one else to step in and do it?

And when they do ask, I don’t even know how to answer. All I know is that when I got my divorce — a miracle of its own — I felt like my whole world had ended, and so had my kids’. I remember thinking, How am I ever going to do this on my own? How can I possibly do this alone? And what’s going to become of my boys without their father?

Because however difficult my married life was, at least I knew that my boys had a father. There was someone besides me who loved them as much as I did and looked forward to their progress each day. There was someone to coach them through the first-bottle stages and the learning-to-sleep-through-the-night stages, and someone to give my older son his first haircut. There was someone to assemble their cribs, and later their tricycles, and someone to teach them about cars and trucks and building blocks. There was someone to take them to their babysitter every morning and to read them stories at night. When people asked me how I’d managed to hold on to a dysfunctional marriage for so long, I said, “I did it for the kids.” And it was true – because as long as we were together, at least the kids had a father. And I knew that as soon as I said “No more,” my kids would no longer have that father around.

But there was no choice. One day I had to say it, and then suddenly he was gone. Not only from my life, but from theirs, too. He could no longer fill that role that I’d taken for granted that he would fill. Everything had suddenly been left to me. Diapering. Toilet training. Shopping for yarmulkes and tzitzis. Deciding when to start teaching blessings. Practicing alef-beis. Reading sheets on the weekly Torah portion. Buying the first bike, and going to my son’s siddur party. All on me. There was no one else around to help out, to coach and to teach, to make decisions with me. It was all, and I mean all, on me.

How am I supposed to do this all by myself, and do it right, too?

Yes, there are loving grandparents nearby, thank God. But grandparents aren’t parents, and only I can make the decisions about when it’s too much dessert and when it’s time to start going to shul. And there are so many decisions to make, so many things to figure out. I sometimes feel like saying, I’ve never been a mother before. These are my first two little boys. How am I supposed to do this all by myself, and do it right, too?

I do it for my kids, because I know that they have no one else. Without a father, they need a mommy. They need the sense of stability I provide, and they need the sense of normalcy. Day in, day out, I teach them to follow rules and to behave nicely, to treat each other respect and to treat Mommy properly. Day in, day out, I make supper and read them bedtime stories, I do the laundry and I pick up the toys. I do it because it needs to be done, and if I don’t do it no one else will. And I do it for them, because if I don’t it won’t get done.

I can’t provide the other half of the parenting equation. I know I can’t, because I’ve tried, and it doesn’t work. But I can be a mommy, and I am a mommy. And I do the best I can, every day, to provide these boys with what they need.

Yes, it’s all on me. It’s a job that requires superhuman effort, this job of single-parenthood, especially when you have two lively little boys competing for your attention and trying to see how much they can get away with. But they need me – and I need them, too. And that’s why I work so hard to achieve normalcy, for all of us. Because as long as our home life carries with it a sense of normalcy, of stability, I know they’ll be okay. And so will I.

S. L. Weinstock is the pen name of a writer who lives in Jerusalem with her two children. Her work has appeared in Mishpacha magazine, Aish.com, the London Jewish Tribune, and various other publications.

The Music of Opportunity

Pop's Megillah
Why Are The Prayers Of Yom Kipur So Repetetive?
Ha'azinu 5783: A Time for Unity!
Twisted Thinking
Comments