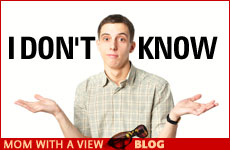 What are the three most important words? There seems to be a debate. Some seem to think they’re “I love you.” Others (most notably on aish.com) argue in favor of “I was wrong.” There are proponents in the “I am sorry” camp. I would like to suggest three words not commonly raised in these discussions. Perhaps they’re not the most important but they’re certainly crucial.

Those three words are: “I don’t know.”

These three words have not been given their due in value and significance. In fact many of us feel embarrassed to say them. Aren’t we supposed to have all the answers? How can we acknowledge to our children/students/employees/spouses/friends that we don’t know everything? They’ll never respect us again.

I want to let you in on a little secret. Unless they are small children, they’ve already discovered we don’t know everything. (If they are adolescents they think we don’t know anything!) We’re not putting anything over on them.

People will actually respect us more if we acknowledge we don’t know.

Secondly – and even more importantly – they’ll actually respect us more if we acknowledge we don’t know. Read than sentence again. It may be counterintuitive but it’s true.

I was recently speaking with someone who really wants to teach but is terrified by the prospect. “If you tell your students you don’t know,” I said, “they’ll trust you more. And if in addition to that you actually research the answer, not only will they not judge you for not knowing, they’ll be flattered you took the time and trouble to find out.”

In another scenario, I was involved in a complicated medical case where the intern on call kept offering up opinions that even I, the untrained lay person, knew were wrong. I really wanted to take her aside, put my arm around her and say, “Listen, here’s some advice from someone old enough to be your mother. You don’t need to have a quick, pat answer for every situation. In fact, it’s actually dangerous if you do. We’ll respect you more – yes more! – if you consult with a senior colleague.” (I didn’t live out that fantasy; instead I just had her removed from the case.)

Similar situations occur in workplaces across the country every day (hence the popularity of the Dilbert cartoons). Bosses frequently seem unwilling to admit their ignorance and give either insufficient instruction to their employees, or even misdirection. (Of course, in addition to this, they never take the blame!) Employers could actually learn from their employees if they would give them the chance.

I think married men sometimes feel that their wives won’t respect them if they admit they don’t know. But, as I mentioned earlier, even if everyone else is fooled, your wife is on to you! And she doesn’t think less of you for it. But it may adversely affect her opinion of you if you pretend to have knowledge you don’t have or give answers or advice that doesn’t make sense. (When you catch your husband doing just that, I recommend using humor, not aggression, to rectify the situation!)

Friends: No one actually wants to be friends with someone who thinks they know it all so this is less of a problem.

We just don’t want to say “I don’t know” to everything they ask!

Living Outside the Comfort Zone

Punk Rocker for the Day

Invasion of Privacy
For Every Individual, A Torah Scroll
Allegiance To The Monarch
Meet the Real You: Yom Kippur
Comments
MOST POPULAR IN Family
Our privacy policy
Aish.com Is Looking for Great Writers