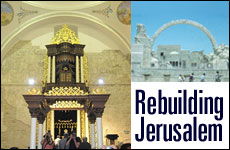 No matter how Mrs. Clinton may scold, the Jewish people are rebuilding Jerusalem.

In the middle of the most important Jewish neighborhood in the world’s most important Jewish city was a ruin. This ruin in the middle of Jerusalem’s Jewish Quarter of the walled Old City (the only Jerusalem that existed until the mid-19th century) was no ordinary ruin. It was the ruin of what had been the Hurva Synagogue, the largest and most magnificent synagogue in the Holy Land. And, unlike other ruins that dot the Old City, this ruin was not caused by the natural erosion of eras. The Hurva Synagogue was destroyed on one day, on May 27, 1948, in one malicious, devastating act. As soon as the Jewish residents were vanquished from that part of the Jewish Quarter, the Arab Legion exploded a bomb at the top of the massive dome. 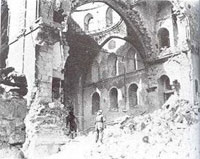 Or so the official story goes. I was shocked, however, to see a photograph in a book called For the Sake of Jerusalem. It shows a uniformed Arab soldier wearing a keffiya standing on a pile of debris in the Hurva. The dome and one wall are missing, but three walls of the monumental building remain. Obviously, the Hurva, which stood 24 meters high, was too massive to destroy easily. The Arab conquerors of the Old City had to work hard to decimate what had been the glory of the Jewish community of Palestine.

Puah Shteiner, who was a little girl living in the Jewish Quarter in 1948, described (in her gripping book, Forever My Jerusalem) the grandeur of the Hurva: its white marble floor, its high walls with their three stories of stained glass windows, its holy Ark (two stories high) on the Eastern wall overlaid with gold, its many shining chandeliers, and its massive dome, painted sky blue and strewn with stars.

The Hurva was the site for all important events for the Jewish community of Palestine. There the Chief Rabbis were inaugurated. There the representatives of the Ottoman and British governments honored the community on festive occasions. There Lord Herbert Samuel, the first Lord High Commissioner of the British Mandate for Palestine, himself a Jew and a Zionist, was called to the Torah upon his arrival in 1920. 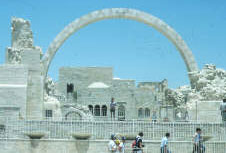 After the Old City was liberated during the Six-Day War of 1967, the Israeli government set about rebuilding the Jewish Quarter. The Jordanians, who had controlled the Old City for 19 years, had destroyed or desecrated all of the dozens of synagogues in the Jewish Quarter. The beautiful Sephardi Yohannon ben Zakkai Synagogue had been used as a garbage dump. It took months just to empty out the garbage before the building could be restored. As for the Hurva, however, nothing remained except the eastern wall and the bima. The rubble was cleared out, and an arch was constructed commemorating the location and size of the original southern arch of the building. This arch, representing former glory and destruction, became the symbol of the Jewish quarter.

The synagogue was first built in 1701 by the followers of Rabbi Yehuda HaHasid, who brought a large contingent of Ashkenazi Jews from Germany and Moravia. Rabbi Yehuda, however, died three days after arriving in Jerusalem. His struggling community could not pay the interest on the debts they owed their Arab creditors, nor the heavy taxes imposed on non-Muslim residents. After 20 years, the Arabs banished the Ashkenazi Jews and burned down the synagogue with its 40 Torah scrolls. For the next century and a half the synagogue lay in ruins, thus conferring on it the name “Hurva,” which means “ruin” in Hebrew.

In the early 19th century, followers of the Goan of Vilna arrived en masse in Jerusalem. In 1836, one of those followers obtained official permission to rebuild the Hurva. Funds were collected from Jews throughout the world, and the Ottoman Sultan’s own architect designed the Byzantine building. In 1864, the splendid synagogue was dedicated. It was officially named “Beit Yaakov,” after Baron Jacob Rothschild, but everyone called it the Hurva.

I have lived in the Jewish Quarter for the last 25 years. I have seen friends married in the ruins of the Hurva. I have worshipped on Rosh Hashanah and Yom Kippur in services held in the ruins of the Hurva. And every time I passed the giant arch, I have felt galled and saddened at the loss of the splendor we once had that was so viciously destroyed. 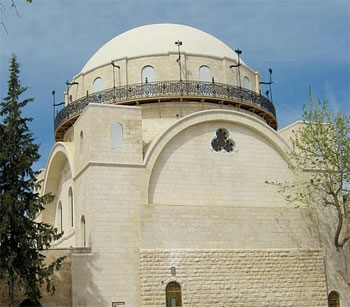 From a geopolitical standpoint, however, the timing was terrible. During Vice President Biden’s visit the week before, the building of 1600 units in the Jerusalem neighborhood of Ramat Shlomo had been announced. The Vice President was livid at what he perceived as an “insult” to American interests in advancing the fragile “peace process” with the Arabs. Then, with the impending dedication of the Hurva Synagogue in what the U.S. considers “contested” East Jerusalem, Secretary of State Hillary Clinton scolded Prime Minister Netanyahu for a full 43 minutes on the phone. The situation devolved into the worst crisis in U.S.-Israel relations in more than three decades. Instead of attending the Dedication ceremonies, Prime Minister Netanyahu sent a video of his greetings.

The most furious reaction to the Hurva dedication, however, came from the Arabs, who rioted in East Jerusalem and other areas of Israel. For the day of the dedication itself, the Hamas terrorists called for a “Day of Rage,” with the Imams whipping up their followers by proclaiming that the Al-Aqsa mosque on the Temple Mount is under attack, that the reconstruction of the Hurva is the first step toward rebuilding the Temple.

I was privileged to attend the morning worship on the first day that regular services were resumed, after 62 years, in the Hurva. The prayer leader got to the blessing for Jerusalem, “And to Jerusalem Your city please return in mercy, and rest Your Presence amidst her as You prophesized, and build her soon in our days, an eternal building…” When he reached the conclusion of the blessing, he yelled out the words that reverberated from the massive dome: “Blessed are You God, WHO BUILDS JERUSALEM.” 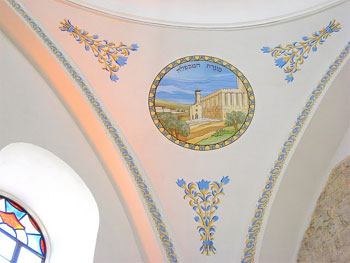 Jews have uttered that prayer three times a day every day for the last 2,000 years. Jews have uttered that prayer in ancient Rome, in medieval Europe, in exile ships setting sail from Spain, in Czarist Russia’s Pale of Settlement, in Auschwitz, in modern America, and in Israeli tanks protecting the northern border. The rebuilding of the Hurva is an answer to that prayer, a fulfillment of God’s promise. And no amount of scolding by Secretary of State Clinton can mute the jubilation of that fulfillment.

A cloud of gloom has settled over Israel. Prospects for peace are nil, terrorist organizations hold sway at the borders of Lebanon and Gaza, Israel’s own Arab population has become radicalized and implacable, Iran is within a year of building a nuclear bomb that could destroy this tiny state, Israel’s “right to exist” is being challenged by public intellectuals and academics the world over, Europe treats Israel like a pariah, and now the Obama administration is deriding the democratically elected leader of Israel in a way it would never dare to treat any other head of state.

The Jewish spirit can be temporarily routed, but never vanquished. 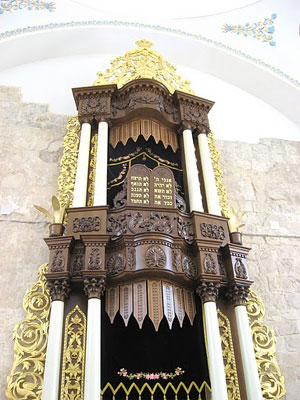 At the entrance to the Hurva on the first day of the dedication, I found myself standing in line behind Puha Shteiner, whose book Forever My Jerusalem relates her personal account of the traumatic fall of the Jewish Quarter in 1948. Her parents, grandparents, and great-grandparents had been born in theOld City and had prayed in the Hurva Synagogue.

As a child she had loved the magnificent synagogue. The day before she had been expelled from her home with the defeat of the Jewish defenders, she had heard the frightening explosion that signaled the destruction of her beloved Hurva. After the liberation of the Old City in 1967, Mrs. Shteiner was one of the first residents to move back into the Jewish Quarter. As we entered the rebuilt synagogue, I asked her if she had ever dreamed she would pray again in the Hurva. With tears in her eyes, she shook her head.

The resurrected Hurva proves that the Jewish return to the Land of Israel and Jerusalem is inexorable. Described by the Prophets over and over again, the Jewish People’s return and rebuilding is a Divine promise. It can be delayed. It can cost us thousands of lives in war and terrorism. It can be denounced and condemned by America, Europe, and the entire world. But it cannot be stopped. Because we are the Eternal People. We are back and we are building.

Inside the Cauldron: Eyewitness to Jerusalem Bombing