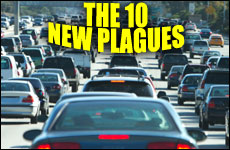 It’s been over 3,000 years since we’ve had a good plague, so we’ve updated the list with ten new ones.

It has been a long time since we have experienced a good plague – 3,000 years at least. But then, as Passover approaches, Jewlarious Senior Head Chief Correspondent, Marc Eli Schnitzel is seeing plagues everywhere. So, he thought that he would update the famed ten plagues with his own modern ten:

Imagine if Moses had given Pharaoh’s financial team a massive and completely undeserved bonus pool.

1) Greed: Imagine if Moses had marched up the palace steps to see Pharaoh and said, “I have warned you, but you have not listened. Now, I will call for a massive and completely undeserved bonus pool, which shall befall your entire financial team, who hath wrought so much devastation already. These bonuses will throw the economic system out of whack forever and no one will ever do anything about it.” Pharaoh certainly would have scoffed at Moses, accepted those bonuses and purchased a Ferrari or two in which to gallivant around Alexandria. And then his day of reckoning would have come when the bonuses would have led to the collapse of the economy, massive government debt and declining pyramid prices. He would have begged Moses to take those bonuses back and Moses probably would have in exchange for freedom. But it seems that no one – not even the President of the United States – can do anything about them these days.

2) Avatar: Why is the plagues above so general and this one so specific? “Bad movies” cannot really be considered a plague – often times their failures are funny and enjoyable. But, at 162 minutes with a plot pilfered from Pocahontas and Dances with Wolves and then rewritten by a five year old, Avatar was an experience that was far worse than a mere bad film. Avatar was like suffering through boils, locusts and hail combined and the public reverence for it was reminiscent of another plague, darkness. Yes, we know that it was visually stunning and that lots of people liked it, but that can also be said of Color Me Badd’s 1991world tour and, as a society, we regret that now, don’t we? Are you outraged by this plague? Just read Sigourney Weaver or Giovanni Ribisi’s dialogue again and see if you survive to levy your complaint.

3) Healthcare: Who would have thought that healthcare itself could be considered a plague? How's that for irony? Yes, healthcare, with its desire to serve the American public during its time of need seems to be the worst thing that could ever happen to Americans without healthcare. “Do we look like those socialists in Canada, whose healthcare system costs less and whose government has no ownership stake in their banking system at all, unlike ours which owns huge chunks of Citigroup and AIG?” Wait, isn’t the accusation of socialism itself increasingly ironic? Maybe the actual plague is not healthcare but an inability to understand irony?

No, I didn’t see what you posted on Facebook because I am living my life instead of posting it online.

4) Technology: “Did you see what so and so posted on Facebook?” No, I didn’t because I am living my life instead of posting it online. Didn’t we learn our lesson from how awful reality TV is? Do we really need to peer into the lives of hundreds of our friends to validate that their lives are far duller than our own. Remember a simpler time when you went out for dinner to talk to friends and did not go out to take pictures that tell others about the wild time that it only seems you had in photos? Facebook is in itself a plague and we expect that many will tweet this article in agreement.

5) Laughter: Never seen Jersey Shore? Well, you have probably not seen a river turn to blood, but can still call a plague when you see one. The fact that those who are wise enough to stay away still know the names Snooki and J-Woww, reveals just how insidious this plague is. It seems that the premise of this show is: let’s take a bunch of people who are already parodies of themselves and encourage them to drink and engage in acts of violence and degradation, so that we can laugh at them for it. And, while we are at it, let’s also allow them to spell their names in ways that are an affront to common sense. Like many high-schoolers, you probably read Flowers for Algernon which had a similar plot device: Charlie’s coworkers get him drunk and laugh at him. But, the goal was to teach us that laughing at the mentally deficient is a bad thing. Maybe the joke is on us for watching? Of course it is.

6) Congestion: Sadly, a visit to Jerusalem reveals a modern day plague – rakevet kalah -- the new light rail system which is scheduled to open in 2011, three years behind schedule and 150% over-budget… and who knows? Maybe those numbers will be revised again. A 13km swath has been cut through the city to make way for a train that never comes and has stopped traffic dead in its tracks for five years, leaving Israelis to do what they do best – honk their horns at things that cannot move. If you face the plague that is construction of light rail, we wish upon you an antidote of sorts – a bounty of donkeys for your public, because if you need to go somewhere, old fashioned transportation will get you there a lot quicker.

7) Darkness: Whoah, retro plague! Let’s not be na?ve. Darkness is still a plague, especially leading up to December 21st each year, otherwise known as the winter solstice. For example, like you, I split my time between Anchorage, Alaska and Tallinn, Estonia and each year on December 21st, we face a mere five and a half hours of sunlight. Each eighteen and a half hour night, we all wonder if that stubborn pharaoh has returned and enslaved our people again. Then we wake up relieved, send our children to school, go to work and return five and half hours later, with plenty of time to lament why we have chosen to live in a place that is light for five and a half hours each day.

8) Permissiveness: Webster’s Dictionary defines a plague as “a disastrous evil or affliction; a destructive numerous influx” How is it that Jonathan Pollard sits in jail but Ron Artest, Gilbert Arenas, Jason Kidd, Tyreke Evans and, well, the entire NBA, are free to exert a “destructive numerous influx” on our society? Criminal trespassing, unlawful restraint, false imprisonment, drug possession, assault, conspiracy – and those are just the charges that Allen Iverson has faced – are a part of a broader plague upon our society. The best part of this plague is that we pay top dollar for it. I wonder how many frogs you can purchase for the NBA maximum salary of $20,195,000 per year? Unleash the frogs!

9) Stimuli: Oh sweet, sweet caffeine, such a cruel mistress. Diet Coke for breakfast and three coffee breaks during the day -- by 5:00 pm, half of us are ready to collapse and the other half are ready to sprint home. But, of course, we can’t get home because our coffee breaks cost more than our earnings. Why shouldn’t we have three $5.50, 500 calorie frapuccinos each day? And why shouldn’t we put them on our unpaid credit cards? When the bank starts calling they can’t repossess already consumed lattes, can they? Now we’re thinking!

10) Slavery: What do Bashar Al-Assad, Hosni Mubarak, Kim Jong Il, Raul Castro, Robert Mugabe, Omar Al Bashir, King Abdullah and Muammar Qadafi all have in common? We would ask them, but it is tough to get an interview with a dictator when you work for Jewlarious, especially in countries where freedom of the press and freedom of speech are punch-lines themselves. What kind of world are we living in when people cannot freely read Jewlarious? How can it be that in 2010 there are still slaves in Egypt? Looks like we need another Moses.

My Name Is Mark and I'm a Jewish Date aholic
Scientific Curiosity and the Divine Encounter
Mind Over Milkshakes
Love the Convert
Comments
MOST POPULAR IN Jewlarious
Our privacy policy
Aish.com Is Looking for Great Writers