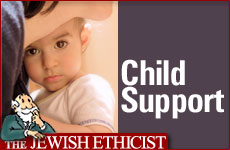 Q. Many states impose strict and sometimes demeaning sanctions on fathers to compel payment of child support. What does Jewish tradition say about this?

A. The prevalent view in the United States is that the main obligation for child support falls on the biological father, and not on the mother or on the community. Often various sanctions apply, for example, the ability to obtain a driver's license, passport etc.

Jewish law as described in the Talmud and authoritative codes doesn't impose the same kind of sanctions, but it definitely shares the view that the father has a legal and ethical obligation to support his minor children, and that it is shameful for him to shirk this obligation.

Technically, Jewish law distinguishes two levels of child support obligation. There is an inherent obligation on the father to provide for his children until age 6; and from then on there is a rabbinical obligation which is viewd as an extension of the general obligation to give charity. But practically speaking there is little difference between the two.

The following Talmudic passage distinguishes various levels of enforcement of this obligation:

And all this [that the father is reprimanded and shamed, but not actually assessed] applies only if he lacks means, but if has the means we compel him to pay. (1)

The references to the ostrich and the raven are explained by the commentators as follows: These species of birds aren't kind to their offspring, but at the very least they provide them with food; so this man is behaving worse than an animal.

The motivation behind this law is evidently the same as that in secular law: both to insure that the father personally participates in providing for the children, and to ensure that the children don't become a burden on community funds. "Charity begins at home" and a person's first obligation is to his wife and his young children.

It is impossible for me to comment in detail on the various provisions of the child support laws in the US. There are certainly differences; for example, in Jewish law a father with no means is not formally compelled to pay child support, but under secular law he may be. But we clearly see that Jewish law perceives a cardinal ethical obligation for a father to support his children even if his means are limited. After all, the Talmud concludes that if he has means they are subject to collection, and presumably his wages would be subject to garnishment. It is specifically the father who currently has no means to support his children who is shamed, in order to persuade him to do whatever is necessary in order to provide for them.

This obligation definitely does not preclude a voluntary arrangement, one increasingly common in our society, whereby the mother is the breadwinner. In that case the father is indeed providing for his children through this voluntary agreement. But the primary obligation for the support of the children falls on the father, and not on the mother or the public purse.