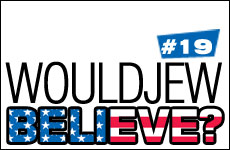 "BEWARE THE IDES OF MARCH"

Between history and Shakespeare, who doesn’t know that the Ides of March (March 15, 44 B.C.E.) is the date Julius Caesar was assassinated by his Roman Senators – including his good bud, from which one of the most famous phrases in literature was born: “Et tu, Brute?”

What is less known is Caesar’s loyalty toward Jews. For strategic and philosophical reasons, he knew the importance of Jews in the Roman body politic. If the Senators saw his murder as an act of “liberation,” many Jews saw the opposite.

What is less known is Caesar’s loyalty toward Jews

Caesar issued a number of pro-Jewish decrees, many to honor Hyrcanus, Alexander’s son, who was high priest and ethnarch of the Jews, in recognition of his personal valor in peace and war. Among them, Jews were granted the freedom to assemble and worship, unencumbered.

Roman officials had to be extremely careful not to offend a Jew.

Most intriguing was Caesar’s attitude toward Jewish beliefs vs. idolatry. On the first day of the Passover, he annually amassed a procession of Roman dignitaries for the purpose of throwing away idol-images. His actions suggested his belief in the favorable influence of the political principle of Judaism over the other Eastern religions that had been brought to Rome.

At his funeral Jews were conspicuous, mourned the Ides of March, and for several months came to make final lamentations over his burial-place" ("Histoire du Peuple d'Israel," v. 196, 197).

THIS YEAR, DRINK FROM “JERUSALEM”

The good news is, if there are fewer Jewish aging alcoholics, we Boomers can probably thank Dov Behr Manischewitz. The not-so-terrific news is, one whiff of fruit syrup, soaked in 20 pounds of sugar, drives us into ecstasy! No, we weren’t headed for drunken lives. But as for diabetes? Back then, if you couldn’t cut your Pesach wine with a dessert knife we believed it simply wasn’t “Kosher for Pesach.” Wrong. “Sweet” is not a requirement. True, if a Gentile friend, or (God forbid) connoisseur took a sip, he passed out or spat out. And no, you couldn’t find these libations on wine lists, outside of maybe Brooklyn. Unfortunately, history is responsible for the bad rep. The Concord grape, the only available variety for Jewish immigrants in the New York area, is acidic. Tons of sugar was added to make it drinkable – or cuttable.

But, if you’ve been around since 1985, you know that sweet, sticky tradition – is going, going, gone. Drinkable, quality Pesach wines have been out there from California and around the world for over 25 years, such as Bartenura’s Italian Moscato (nice in charoset), and Barkan Merlot Superieur to WOW your dry wine pals if you’re into oak and anise, to name just a few.

Now, Israel is taking its wine very seriously. Modern techniques imported from wine making countries are putting Israeli libations on the maps and menus from New York to Paris.

Israeli wineries, mostly kosher, including “boutique” bottles, are making 33 million a year, and some vintages are earning international praise.

And why not? Wines from neighboring Lebanon, in the same climate, have been winning international awards for decades. Considered among the top Israeli offering is the red 2003 Yatir Forest label from a subsidiary of Carmel Winery, founded by the Baron Edmond James de Rothschild. Carmel, Israel's largest winery, has recently been applying methods learned from France, Australia and California, to locally grown grapes.And, exporting 15 million bottles ranging from $10 to $100, Israelis are making world class wines.

Interesting Fact: According to the Napa Valley Register (10-10-08), during Prohibition, the L.M. Martini Grape Products Company, managed to stay in business – thanks to rabbis. As rabbis were allowed wine for sacramental purposes, the company sold thousands of gallons to rabbis – and all was completely legal. The winery prospered. Martini even made kosher wine for a rabbi who lived next door.

We Jews have always wandered and wondered (sometimes about why we were forced to wander). But our ancient nomadic history also fed our passion for exploration – on land and above it. When we think of Jewish astronauts, Judith Resnick and the ill-fated Challenger mission will always be, mightily mourned. Others followed, brought a Jewish symbol with them on their climb to the stars. Jeffrey Hoffman, the first Jewish man in space brought a Torah during his Columbia mission in 1996 (no doubt starting the famous joke of the rabbi in space, who, when asked about his journey, moaned "All the time, with the Shacharit, Mincha, Ma'ariv, Shacharit, Mincha, Ma'ariv..."). David Wolf, orbiting during Chaukah, couldn't light his menorah without blowing up the craft, but thanks to zero gravity, probably holds the dreidel spinning record – an hour and a half. The dreidel went missing, but was later recovered after in an air filter after having traveled 25,000 miles! In 2008, Gregory Chamitoff placed mezuzot shaped like rockets on the post near his bed at the International Space Station. Jewish hero, and first Israeli astronaut, Ilan Ramon, died when his Space Shuttle disintegrated during re-entry. Prior, he did everything possible to make his space journeys “Jewish,” including requesting Kosher food, and consulting a rabbi about the proper way to observe Shabbat when in orbit. On that fateful flight, he carried a Torah scroll, a microfiche copy of the bible, and a picture drawn by a Jewish boy in a concentration camp during World War II.

As for Gary Reisman who left for his new temporary home -- the International Space Station -- right before Pesach? He asked to bring matzah, but alas, NASA believed containing the crumbs would be a “mission impossible.” (For this, they needed rocket scientists?)

GUESS WHO CAME TO SEDER?

Pesach: 1975: The place: A Seder at Temple Israel in Hollywood, California. Seafood king, Louie Kemp planned to attend, (he subsequently became Orthodox). He employed a young man named Christian, whose dad, a non-Jew, checked in frequently about his son’s progress. The two elder men became friends. “Dad” asked to attend the Seder, as, at the time, he was a strong supporter of Israel and Jews, according to his Jewish friend. Both personally and professionally, he benefitted by their support and friendship. The second was a childhood friend of Kemp.

Talk about an unlikely group! Louie’s two friends were: Marlon Brando, and Bob Dylan! Brando brought Native American activist, Dennis Banks of Wounded Knee fame – in full Indian regalia, including braids and feather. When Brando read from the Haggadah “it was as if he were reading Shakespeare,” reported Kemp, which was followed by Dylan singing “Blowin’ in the Wind.”

Ah, but there is a P.S. Later on Brando became known for disparaging remarks about Jews in the entertainment industry. Although he also praised the Jewish people, his comments were highly offensive to many, tarnishing his rep, and leaving the impression that he was anti-Semitic.

Then, of course, there was MOT Bob Dylan (born Robert Allen Zimmerman), who could make a soul dizzy with his changes in belief systems. He seemed to re-claim his roots around the year 2000.

Jew in a Box

Step Bubbiehood
Were Adam and Eve Jewish?
How I Learned to Love the Multiverse
10 Big Jewish Inventions
Comments