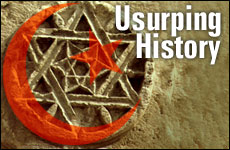 How not to advance Arab-Israeli peace.

Throughout his life, one of Yasser Arafat's favorite themes was that there was no historical Jewish connection to Israel.

He would assert that there never was a Jewish Temple in Jerusalem, that the Western Wall has no Jewish significance, and even that Abraham himself wasn't a Jew.

Indeed, he went so far as to reject the Jewish link to Jerusalem in the presence of President Bill Clinton during the Camp David talks, evoking outrage from the American leader and offering insight into why the negotiations were doomed to fail.

Arafat's views, unsurprisingly, were echoed relentlessly by Palestinian media outlets and textbooks, not to mention Muslim clergy. Generations of Palestinians were "educated" to believe that the Jews were interlopers, not a people indigenous to the Middle East.

This had nothing to do with history, since there was abundant evidence of the intimate Jewish tie to the land dating back well over 3500 years, not to mention the spiritual and metaphysical meaning of Jerusalem as the heart and soul of the Jewish narrative.

And, needless to say, Arafat never chose to explain why Jerusalem is mentioned in the Hebrew Bible nearly 700 times, while not once in the Koran. Or why, when Jerusalem was in Jordanian hands from 1948 to 1967, not a single Arab leader besides Jordan's king chose to visit what was then considered a backwater city. Only when all of Jerusalem fell into Israel's hands in 1967 did the city suddenly seem to take on a magical, magnetic meaning for the Arab and larger Muslim world.

Instead, at the risk of stating the obvious, Arafat's revisionism had everything to do with politics and propaganda.

If Palestinian leaders could cut the link between Jews and the region, then they would undermine the very legitimacy of Israel.

Moreover, there was something else at work. It wasn't just that the Jews allegedly had no ties to any of these sites, but also that the Muslims did. In other words, what was at work was a usurpation of Jewish history and its replacement with Islamic history - a kind of across-the-board super-sessionism by a religion that began more than 2000 years after Judaism.

Arafat died in 2004, but his beliefs most assuredly didn't.

Typical of this ongoing mindset is the Palestinian Authority's chief Islamic judge, Sheikh Tayseer Rajab Tamimi, who recently denied that Jews had ever lived in Jerusalem or that the Jewish Temple ever existed.

The Turkish Prime Minister states that the al-Aqsa Mosque, the Cave of the Patriarchs, and Rachel's Tomb "were not and never will be Jewish sites, but Islamic sites."

And now, Turkish Prime Minister Recep Tayyip Erdogan joins the fray, continuing his recent policy of never missing an opportunity to castigate Israel and proclaim pan-Islamic solidarity. In a Saudi newspaper, he states that the al-Aqsa Mosque, the Cave of the Patriarchs, and Rachel's Tomb "were not and never will be Jewish sites, but Islamic sites."

For the record, the Cave of the Patriarchs, in Hebron, is revered as Judaism's second holiest site, after the Western Wall in Jerusalem. Rachel's Tomb, in Bethlehem, is Judaism's third holiest site. As for the al-Aqsa Mosque in Jerusalem, Israel has gone out of its way since 1967 to respect Muslim religious authority there, even as the land underneath the mosque, the Temple Mount, is central to Jewish religion and history.

Indeed, this troubling pattern of trying to deny or extinguish a Jewish presence extends deeper into the region.

The other evening, my wife and I met a distinguished American journalist with over three decades' experience covering major news stories around the world.

Hearing an accent, she asked my wife where she was from. On learning that my wife was originally from Libya, she inquired as to when and why she had left. My wife replied that, as a Jew, she and her family were compelled to flee their ancestral homeland in 1967, just after the Six-Day War triggered a paroxysm of violence that resulted in the murder of many Libyan Jews.

The journalist said that she hadn't realized Jews ever lived there, much less that Jews, together with native Berbers, predated the Arab conquest and occupation of Libya by centuries. She couldn't conceive that every last trace of the Jewish presence in Libya, including synagogues and cemeteries, had been wiped out, as if the Jews had never existed.

When my wife added that the story was more or less repeated across much of the Arab world, with hundreds of thousands of Jews forced to leave because of persecution, violence, and intimidation, our interlocutor voiced embarrassment that all of this was new to her. Why hadn't she known, she asked rhetorically?

Well, the answer may be threefold.

First, the Arab countries themselves have sought to avoid any discussion of the subject, much less acknowledge the presence of Jews on their soil for centuries or, in the case of nations like Libya, millennia. For their own reasons, they would rather whitewash history.

Second, the Western media barely focused on the mass exodus or its implications. It just wasn't deemed a newsworthy story. As one striking illustration, the New York Times devoted exactly two tiny news briefs in 1967 to the end of the Libyan Jewish community.

Third, the Jewish refugees, until quite recently, were too busy establishing new lives to dwell on their kidnapped histories - or, more precisely, their erased histories, as if they had never existed in lands they once called home.

And even when they tried, who was listening? The UN? No. The media? No. Arab leaders like Assad of Syria and Qadhafi of Libya? No. Even Western officials largely yawned when presented with the facts, perhaps because it only made a complicated Middle East puzzle still more so, even if it was an essential piece of that puzzle.

But all is not entirely bleak. There are a few bright spots.

Morocco and Tunisia have always been exceptions to the rule. While the bulk of Jews from both countries did leave for fear of their future, those who stayed behind have been respected as an integral part of the nations' fabric and fiber.

And last week in Cairo, history was made. A synagogue and a yeshiva, both associated with the legacy of the towering 12th-century Jewish rabbi, scholar, and physician Maimonides, have been carefully restored and will be open to the public, marking a step forward in finally acknowledging the Jewish role in Egypt's history.

The quest for coexistence is achieved not by treaties alone, but by a spirit of mutual acceptance, understanding, and respect.

Those who would cavalierly deny the Jewish people their history and religious sensitivities, whether in Jerusalem, Hebron, or Tripoli, while demanding full recognition of all their own claims, are doing the cause of peace no service.