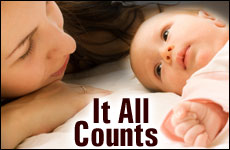 I thought I was a giving person. Then I got married and had kids.

During my high school and college years, I thought of myself as a giving person. I spent hours at the local nursing home and the children’s hospital. I spent countless Saturday nights on “Midnight Runs” in which we packed up dinner for the homeless and then drove in a van throughout Manhattan searching for hungry people. In college, I tutored poor, inner city kids and did the middle of the night volunteer shift in the Penn Hospital emergency room.

I never spoke about any of these activities much; they were just a part of the fabric of my life like my classes and my sorority parties. But still they served as part of my identity; I was a person who wanted to make the world a better place. I liked to give. I was also the type of person who was easy to get along with. I had great relationships with my parents; with my roommates, I didn’t resent being the “flexible one.” What was the big deal if my roommate’s clothes were all over the living room floor or if she insisted on taking the bigger room? Who cared?

I started hearing myself saying things like: What about my needs? Why should I give in?

After graduation I married my soul mate and I immediately realized: I’m selfish and rigid. Of course, there are degrees to each of these character traits. But I started hearing myself saying things like: What about my needs? Why should I give in? Why should I do the dishes again?

From the beginning we were blessed with a marriage that was full of positive regard and respect. So I knew that I was discovering something new about myself. I did care when I stumbled over shoes scattered across the living room. And I realized that I wasn’t always in the mood to give and that giving became harder when it was expected instead of volunteered.

This self discovery reached new pinnacles when we were blessed with children. All of a sudden it didn’t matter whether or not I was in the mood to give. I had to get up four times in the middle of the night even if I didn’t want to. I had to clean up the throw up and change the sheets six times in one night when all the kids came down with the same stomach virus. And I had to be up again at six the next morning, ready to serve breakfast and pack lunches and do all of this with a smile.

One morning I finally admitted to myself: This is hard. I never had that moment in my volunteering days. I could smile at a student or a patient and say, "See you next week." But being a wife and mother, there wasn’t a next week or even a next minute; there was only now.

When I took an honest look at myself, I realized what I was really missing. The applause. The silent admiring glances of friends and colleagues. The long list of achievements and activities that filled my resume. And though I knew better, I would clean up the kitchen for the fifth time and change the tenth diaper of the day and think: This doesn’t count. I’m not achieving anything.

Then our fourth child was born. He was a beautiful, healthy baby who flashed his first smile when he was only one-month old. But he didn’t like to sleep. Ever. And the truth is that I cannot listen to a baby crying. For the first five months of my son’s life, I fed him and cradled him every hour. Needless to say I was very tired, but one night when my son was five months old he slept through the whole night. Eight hours of perfect sleep in which I kept sneaking into his room and checking his soft breathing. And that was it. He slept through the night starting then.

Real giving comes when you’re not in the mood, and all you want to do is go to sleep.

On the second night, I was so worried about the baby. Why wasn’t he waking up to eat? So I tiptoed into his room and stared into his crib. His arms were above his head and his chest was rising and falling in soft, barely perceptible motion. And I felt a tear wind its way down my cheek. I finally discovered that everything that I give to my family does count. It counts not because I will receive an award or anyone is going to add my sleepless nights to my resume. It counts because being a mother makes me into a giving person. It forces me to give in ways that I would never believe I could. It allows me to finally surpass the limits of myself in a way that a hundred volunteer activities never could.

I have started to see that how we give changes ourselves and the world forever. It all counts.