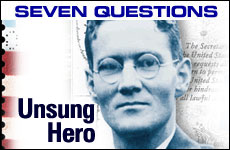 An American Vice-Consul stationed in Marseilles, France in 1940, Hiram (Harry) Bingham IV defied U.S. policy and issued false life-saving visas for thousands of Jews fleeing the Nazis, among them Marc Chagall, Max Ernst and the family of the writer Thomas Mann.

Even after Washington lost patience with him and shuffled him off to Buenos Aires, Argentina in 1941, Bingham continued to annoy his superiors by reporting on the movements of Nazis there. Eventually, he was forced out of the American diplomatic service.

Because he went against U.S. policy, he never received national credit, and because he was a man of action and not of words, his story went with him when he died in 1988. That is until his son, Robert Kim Bingham Sr., 67, discovered some of his father’s documents hidden in the family farmhouse in Salem, Connecticut, and embarked on a journey to bring his father’s heroic story to light.

Q1: Describe the drama of discovering your father’s documents.

In 1996, eight years after my father’s death, my mom, a few of my 10 siblings and I started finding documents at the farmhouse in Salem. There were letters, visa papers, and photos from my father’s time in Marseilles. Until then, our family was aware that he had a hand in the rescue of a handful of luminaries, but we had no idea of the scope of his activity, that he was sought out by thousands of people who went to him for their one last chance to live.

We had no idea that he was sought out by thousands of people who went to him for their one last chance to live.

We found out that in addition to issuing false visas, he sheltered Jews in his home in Marseilles and worked with the French underground to smuggle Jews out of France into Spain, or across the Mediterranean. He even contributed to their expenses out of his own pocket. I have heard estimates that he saved anywhere from 2,500 to 5,000 people.

About five years ago, we found a letter to him from Leon Feuchtwanger, an anti-Nazi writer, thanking my father for hiding him and his wife Marta in my father’s residence for some six weeks while my father prepared a false visa for him under the name of ‘Wet Cheek’. Feuchtwanger had written the letter while on board the Excalibur, heading to New York City, and signed it ‘Mr. Wet Cheek’.

My mother and brother, Thomas, sent some of the Marseilles documents to the Holocaust Museum in Washington, and to Eric Saul, curator of the Visas for Life: The Righteous and Honorable Diplomats Project and the Jewish Rescuers Project, who should really be credited with bringing my father’s story to life.

Q2: How did the remembrance project get started?

In 1998 I went to Israel, on the 50th anniversary of the country, as part of a mission of diplomat children. I was very moved when I saw the exhibit at the Yad Vashem Holocaust Museum in Jerusalem. My father had been singled out for special honor. It was the first time I was really struck by what he had done.

There were many people who were so grateful to him for what he did during the early days of the nightmare of the Holocaust, and many people stepped forward to tell me so. We heard wonderful stories in different parts of the country of righteous gentiles, and it was as though it was my father’s turn to be recognized. That trip to Israel is what triggered my whole incentive to go forward with the remembrance project.

Q3: What is the remembrance project?

Forty representatives of government and 40 U.S. senators forwarded their support for the stamp to the Postmaster General. We had the entire legislature of Connecticut supporting the drive. It was a thrilling bipartisan experience for me.

My book, Courageous Dissent: How Harry Bingham Defied His Government to Save Lives (2007) was part of the same effort.

Q4: What is your primary drive behind all of this?

For over 50 years, the U.S. State Department resisted any attempts to honor my father. To them, he was an insubordinate member of the U.S. diplomatic service.

At the same time, my father didn’t reveal any details. It was typical of diplomatic families that we traveled with that the fathers did not bring to light their activities to their children. I guess because it was such a terrible period and the memories must have been overwhelmingly negative, perhaps because of those they could not rescue.

Our family thought he deserved to be honored; he put humanity above his career.

For me personally, as a former government employee in the U.S. -- I retired in July after 41 years of service as Inside Counsel to the Department of Homeland Security -- it impressed upon me what my father had done.

Q5: What drove your father to take such risks?

He came from a long and illustrious line of risk-takers. His father, Hiram Bingham III -- on whom the Hollywood character Indiana Jones is based -- discovered the ruins of the Inca city of Machu Picchu, Peru in 1911.

My father was a deeply religious man who saw his role as saving lives during that nightmare. He felt tremendous compassion for human beings and that each person had a spark of divinity. 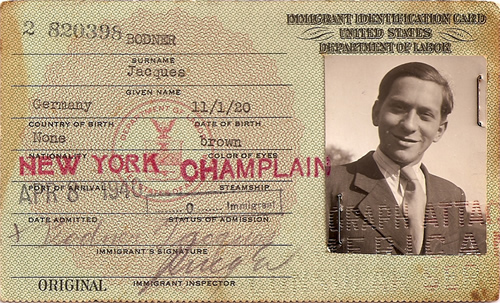 Q6: What is one of your fondest memories of your father?

He taught all of his 11 children that we should live according to the golden rule. One instance that made a deep impression on me goes way back to when I was six years old. We used to go to the beach in Connecticut, near an amusement park called Ocean Beach.

We were walking along the sand and snuck into the park without paying the three-cent ‘pedestrian fee’. When he found out he was very angry with us. It’s one of many examples of my father’s deep moral fiber.

Of course I loved my father. He was a wonderful father and we all adored him.

Q7: Is your father finally getting the recognition he deserves?

Besides the stamp, the State Department made a 180-degree turn in 2002 and Colin Powell invited our family to Washington to present us with a posthumous ‘Constructive Dissent’ award in my father’s honor. I was happy about that. He has also been honored by the United Nations and by the State of Israel. Yad Vashem opened an exhibit in his honor called ‘Harry’s Wall’.

But more than these things are the people who continue to come forward and tell us that our father saved their family. During the stamp drive, one 85-year-old lady told us that she and her sister were just teens when they got visas from my father.

Last October, one of my daughter's professors at Harvard, the Dean of the Literature College, originally from Austria, told her that her grandfather had saved his family. The two of them cried together. It is very emotional. He is alive today because of my father. When we hear these stories, it comes very close to home.

The Rabbi from Shanghai

The Most Important Thing You Need to Know about Rosh Hashanah

Mobilize Now
Korach 5782: Visit to Lift the Spirit
That Time The Ivy League Found A Way To Limit Jewish Enrollment
Would You Rather Be Right or Happy?
Comments
MOST POPULAR IN Israel
Our privacy policy