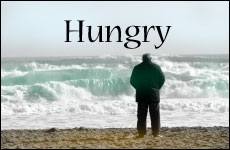 People are starving for so many things.

Simon Green* looked like he hadn't seen himself in a very long time. Downright frightening in appearance, his overall condition was appalling.

"Guess how old I am!" he would chortle, waving his cane in the air, "Ninety-seven! Brain's sharp as a pin, but it's not easy getting old." He would rest his cane on the tiled floor and I would nod politely, waiting impatiently for him to enter the elevator and reach the ground floor of our apartment building. His whole demeanor made me uncomfortable. Even 15 seconds was too long to share an enclosed space.

On the rare occasions when he left his house and his door would be ajar for three seconds, the entire building held their breath. But he was so proud; the idea of accepting help from a social service program infuriated him.

"I'm a retired soldier!" he would state indignantly when I gently enquired if he needed any help. "I fought in Korea, Vietnam! Social Services, my foot! All they'll do is send me some chatty busybody who'll blast my ears with her nonsense. Why, when I was in the army…" and I would listen kindly, adding in the requisite 'yes?' and 'wow!', while mentally wishing to end the conversation and proceed with my day.

One freezing day when the first snowflakes began to fall, a neighbor knocked on my door. "Come here," she said, pointing to Simon's door. "Do you hear something?"

There was a low raspy groan that stopped and started at a few second intervals. We called an ambulance.

We pressed our ears to the dark wood. There was definitely a sound; a low raspy groan that stopped and started at a few second intervals. We called an ambulance that arrived three hours later, complaining of icy roads and inundated emergency services.

They smashed his door with ease but the news was not good. Simon was alive, but unconscious. It was eerie to watch him being led out on a stretcher from his home of 55 years.

"He's Jewish," we told the ambulance men. "Please pass it on to the hospital staff."

"Okay," they replied nonchalantly as they transferred his comatose form into the elevator. "We'll make sure to call the chaplain." There was no one else to call. While foraging for his passport and legal documents, the ambulance team had tried to contact names they found in an old telephone book. There was no one left. Simon died a few hours later, alone, a nurse casually disconnecting the medical apparatus attached to a man that had breathed alone for 97 years.

Back home, my husband entered the spooky property to find the Jewish paperwork needed to show the community burial society. There was not a single working light bulb. Amidst a great heap of a woman's frilly dresses, unwashed linens and what-nots, my husband unearthed a ketubah marriage document dated 1952. His wife’s death certificate, some 20 years later, lay on the same pile of memorabilia; echoes of people's lives that would be incinerated by rowdy builders after the government laid their hands on this ownerless property.

After a two-hour hunt my husband emerged with a bottle of milk. I eyed him in alarm as he casually opened the fridge and neatly deposited it into the milk slot.

"Can you take that out of here?" I finally sputtered.

"Why?" he asked innocently. "It was kept in the fridge. And besides, it's ours. Look." He pointed to where a messy scrawl in black marker clearly showed our address. I gasped. It couldn't be! But it was.

The local Jewish milk company kindly agreed to deliver milk daily to the 100 families who live in our immediate vicinity, a distance from the main Jewish enclave. For weeks, the milk delivery system had gone awry, with missing cartons every day. All the neighbors complained to the milk company to report the error – they apparently weren’t delivering the right quantity. The milk company agreed to label each bottle with its intended address to prove they were sending the right amount. While the labeling hadn’t helped the problem, it now solved the mystery.

"There were three of our bottles in his fridge," my husband remarked.

"Please put it back!" I told my husband. "It makes me feel sick." Simon had taken our milk because he was hungry and didn’t have anything else to eat! I couldn’t bear to look at the only nourishment a sick Jewish man had consumed in weeks. And I, his neighbor, had gaily continued my daily tasks, indifferent to the plight of this elderly recluse.

Of course I had tried, my conscience hastened to reassure me. I had offered to help him more than once. It insulted him; what was I to do? I should have done something. Surely there was a way to help him. But it was just more convenient to accept his independence and look the other way.

I was ashamed to tell my mother that I had allowed my neighbor to die hungry.

When I was growing up, I had a weekly errand to deliver fresh potato kugel and cake to an elderly, childless neighbor each Friday before Shabbat. My mother took on this responsibility so faithfully that whenever she went away she would make sure another member of the family would fill in this duty. My mother had plenty of space left in her heart, mind and schedule to care for those who were dependent on others. I was ashamed to tell my mother that I had allowed my neighbor to die hungry. I am ashamed that my heart, mind and schedule could not expand enough to lavish care on a helpless Jewish man.

Last week my husband brought home a sickly man who suffers from several mental and physical disorders. His house was bitterly cold, he complained, and no one cared. His central heating system was broken and he couldn't deal with the bureaucracy on his own. He had been warming himself by sleeping with six threadbare cardigans.

That night, my husband brought him some electric heaters and started the process of dealing with the gas company. And I turned off our heaters. I knew I didn't deserve heat until this sick man was warmed by our concern.

The closer I look, the more I see that all around me, people are hungry. For food, for love, for a sympathetic ear. People are starving for so many things.

And that’s when I think of Simon Green.

*The name has been changed.

Miriam Gold is a young mother and high school teacher living in London.

Closer to the End

WhatsApp and the Joy of Adar

She Just Doesn't Get It
Judaism and Mental Health
Jews and the Chocolate Trade
Cats: 8 Jewish Facts
Comments
MOST POPULAR IN Current Issues
Our privacy policy
Aish.com Is Looking for Great Writers