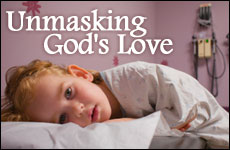 This Purim, grab a piece of God's unconditional love, and dance.

Our story began on the first day of Adar I two years ago. Our heretofore perfectly healthy three year old daughter, Sarah, was rushed to the hospital where she underwent emergency life saving surgery. Something had blown a hole through her stomach which promptly began to wither away. By the time the source of her pain was discovered almost half her stomach had been destroyed by gangrene and had to be removed. (Miraculously, the parts which connected the esophagus and intestines to the stomach remained healthy.)

Afterward, on the advice of our pediatrician, she was transferred to Children’s Hospital of Philadelphia (CHOP) to recuperate. Then she developed severe complications from the surgery and her recuperation was going to take a lot longer than originally thought. Surgery had caused a blood clot in her leg and another tiny hole in her intestine had been discovered which could not be immediately repaired.

As Purim approached and her condition stabilized, we requested that she be discharged in time for the holiday and allowed to convalesce at home. The doctor seemed amenable to the idea and we began to take classes to learn how to care for her at home. We learned how to administer shots and take care of her intravenous and the open wound in her stomach which was pumping out pints and pints of intestinal fluid daily. We were excited to finally be going back to our own house. We would be reunited with our four-year-old son who was living with relatives. Our six-month-old baby would once again sleep in her own crib. Most importantly, our little three-year-old would be able to leave the hospital room she had spent so many weeks in (undoubtedly wondering all the while whether she was there for good). We were all set. But God had other plans.

We were thrown from our emotional high into a state of despair.

Purim that year fell out on a Friday. On the Wednesday before Purim, Sarah suddenly developed a fever. Because the original cause of her condition had not yet been identified, we had no way of knowing if there was still a danger to her life. Therefore, the mysterious fever came as a shock and totally unnerved everyone. We were thrown from our emotional high into a state of despair.

The Fast of Esther came and it was a crazy day. Sarah's doctor decided to replace her PIC line -- an intravenous line leading straight to the heart -- hoping that would solve the problem. It wasn’t a pleasant procedure considering the fact that she was kept awake for the entire time it was being removed. Our hopes for an imminent recovery and return home were disintegrating in front of our eyes.

Purim night Sarah was still running a high fever and began complaining of severe pains in her leg. That became extremely worrisome because her legs had nothing to do with her medical condition. We called for an Attending Physician but the following day was Good Friday and most of the staff either had the night off or were in surgery. A nice but not too knowledgeable Resident came to examine Sarah. Unfortunately, he was clueless as to what to do for her. Finally a Fellow, the next doctor in the hierarchy, came to examine her and impatiently announced that nothing could be done for her at the moment. We were absolutely devastated and it showed.

“Look,” I suddenly turned to my wife, “it's Purim. We can’t spend our time being all sad and depressed. It’s the happiest day of the year; a day when everything looked so bleak but it was all turned on its head as God performed a wonderful miracle for us. Let’s put everything aside and enjoy Purim. We’ll make it the most amazing Purim this hospital has ever seen.”

As I finished speaking a Chinese-American nurse walked in…

“Hello,” she said. “I’ll be Sarah's nurse tonight. My name is Esther.”

Shivers ran down my spine as my wife and I stared at each other. Who would ever believe that my daughter’s nurse Purim night would be a Chinese-American girl named Esther! It was an unmistakable message from our Father in heaven.

Purim proved to be the turning point in her recovery.

The next morning, Purim day, was the first time in six weeks that Sarah was allowed to put a morsel of food in her mouth, a shiny red lollipop. Her fever was gone (it had been an infected PIC line after all) and she was able to dress up in her costume and join the party we made in the hospital’s playroom. Purim proved to be the turning point in her recovery. Immediately after Purim the output from her intestine dropped so dramatically that the nurses kept rechecking her chart to confirm what they were seeing. The tiny hole in her intestine was healing itself without surgery!

By the time Sarah was released from the hospital three weeks later, she no longer needed daily injections because the blood clot in her leg had disappeared. We had been concerned about taking her home on blood thinners because any fall by the active three-year-old could potentially lead to a hemorrhage. We no longer had to worry about that or about giving daily injections. Within weeks of coming home she was able to eat like any other child and thank God today she is completely recovered. Mere words can’t begin to describe our overwhelming gratitude to God for her comeback and recovery.

Purim is all about revealing the hidden and for one brief moment we were given a peek behind the scenery. At the bleakest and most despondent of moments when things look like they can only get worse, God reaches down and in the most awe inspiring and benevolent way sends you a whisper of love, a kiss of endearment with the unmistakable message, “Don’t worry, I’m here, I’m holding your hand and guiding you through it all.”

This Purim, don’t waste the big day. Take a brief moment out from all the fun and festivities to look up at the heavens and feel the incredible warmth and heartfelt affection of a Father who is so madly in love with his children. Grab a piece of that unconditional love, dance with it, sing with it and never ever let go of it.

Back to School and Broke