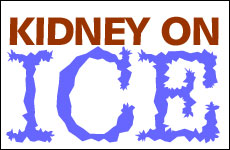 I’m in need of a kidney transplant -- but a Mormon kidney for a nice Jewish boy?

The call came through at 10:15 at night. An unfamiliar female voice began abusing my name. Oy gevalt! A telemarketer! At this hour?

“What’s this about?” I cut her off gruffly.

This was the long-awaited call from the Transplant Center.

“This is Sandy,” she continued, “from UC San Diego Medical Center.” Mayn Got! This was no mere telemarketer. This was the long-awaited call from the Transplant Center. She told me they had a new kidney for me. Then she sold me three Snuggies and an entire set of Ginsu knives.

My unfortunate soon-to-be donor had perished in a motorcycle crash in Utah. I was told he was a good match and he was very healthy, except for the fact that he was dead. The kidney was already on ice, en route to San Diego by air. My insurance didn’t cover amenities, so he was flying via a Delta luggage compartment in a Rubbermaid cooler bought on sale at Walmart. A medical student would be picking him up at Baggage Claim, then schlepping him by bike to the hospital.

My eligibility was confirmed at midnight so I sped from my home in Burbank, CA, arriving in San Diego by 3:00. My bean-shaped new buddy slept in his deep freeze, oblivious to the new life that awaited him. All last-minute medical tests pronounced me fit to go -- “Healthy as a mule,” said the doctor, unwittingly mixing the metaphors “Healthy as a horse” and “Strong as a mule” (though some who know me well insist that “Stubborn as a mule” is what he should have said). I was in surgery by 7:00 a.m. The transplant was pronounced a success.

But the kidney didn’t agree and, after thirteen hours on ice, he refused to "wake up". Although the doctors remained optimistic, their efforts were fruitless. The CD player they strapped to my abdomen endlessly boomed Sousa marches into my belly for days, but while it certainly kept me awake, it did nothing to rouse the kidney.

So one night, in the dark of my hospital room, I spoke directly to my new kidney, man to organ. After considerable prodding he groused, “Can’t you see I’m sleeping here?”

I understood why he slept. He’d already spent one life cleaning bodily wastes. If you’d done that job daily for fifty-six years, you might decide to stay asleep too. I continued to poke him until he awoke again.

He finally responded. “Let me be honest with you. You’re a Jew. Your organs are Jews. That’s fine with me. But I’m a Mormon and an immigrant from Utah, and I’m just not welcome here. Only yesterday, I heard the gallbladder making jokes about me behind my back."

“But of course you’re welcome here,” I insisted. “My people have a long history of tolerance toward other faiths. Judaism is a very progressive religion -- we agree that members of other faiths can be righteous too. Trust me – that’s why we don’t proselytize.

“And pay no attention to the gallbladder. He’s always spewing bile. He’s attached to the bile duct. He can’t help himself.

“I’ll be good to you. You’ll love the food and I promise you a brand new life of joy and reverence, no beer or wine, and no motorcycles." I deliberately didn’t mention coffee.

“Oy. I can’t stomach this dissension,” the stomach 'chymed' in. “I don’t have the heart for it either,” agreed the heart. Then the brain finally offered his words of wisdom. “Remember, my little friend, if you don’t join our loving body, we may all perish – yourself included – and then you will have failed to fulfill the final wishes of the man who gave you life.”

The kidney slowly nodded his head. At least I think it was his head. And he began to excrete tears. And so it happened that my new kidney finally stretched his little renal arteries and awakened for good. In the succeeding weeks, my creatinine, the prime indicator of kidney function, eventually reached 1.4. What I actually know about creatinine is approximately what a tree sloth actually knows about geometry, but take my word for it: 1.4 is wonderful. That’s one committed little kidney I’ve got in there.

When I’m old and gray – er, older and grayer – and my kidney is still working tirelessly inside me, the doctors will undoubtedly attribute it to the endless infusion of anti-rejection medications. But I’ll know it was really because my body lived in spiritual harmony and my Mormon kidney chose at last to become an accepted member of my Jewish organic family.

William Klibanow is a Subordinate Judge with the Mental Health Court of Los Angeles County, California. Other than numerous legal rulings and briefs from his days as an attorney, this is his first published work. His new kidney -- Sidney -- was transplanted in September, 2009, and is still doing just fine. He hopes that this article will spur greater public interest in organ donation.