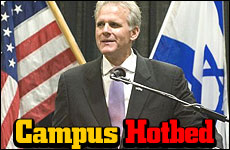 Alarming anti-Israel activity at UC Irvine and other universities.

Israeli Ambassador Michael Oren's lecture at UC Irvine on Monday, February 8 was the latest in a series of events that have been aggressively disrupted by anti-Israel protestors in recent weeks.

Click below to see footage of the event, courtesy of Stand With Us.

Oren was interrupted repeatedly by a large and well-organized crowd of anti-Israel protestors. 11 students were arrested for disrupting the event by shouting insults such as "How many Palestinians have you killed?" and "Propagating murder is not an expression of free speech." Eventually dozens of protestors stood up and exited the lecture hall in the middle of the event, gathering outside to chant slogans such as "Anti-baby killing, anti-Israel."

Students and community members expected that kind of behavior, which unfortunately is typical for UCI's Muslim Student Union over the years. The group has received attention in Congress for allegedly raising funds for the Iran-backed Hamas terrorist organization.

Pro-Israel students have worked diligently to represent Israel prominently and positively on campus. The student organization Anteaters for Israel, buoyed by a support network including Hillel, the Orange County Federation and national organizations such as Hasbara Fellowships, have focused intently on training their students to combat anti-Israel propaganda, elicit support from the UC Irvine administration, and provide innovative educational programming to the greater university community.

"I'm proud of our pro-Israel students and Ambassador Michael Oren, who successfully finished his speech and the event. The disruptors failed to ruin our event and suppress free speech, and in response our students and community are stronger and more united," said Moran Cohen, President of Anteaters for Israel and a Hasbara Fellow.

The disruption at Irvine is one in a number of incidents where virulent protestors have attempted to shut down pro-Israel activity this month. Last week at York University, Hasbara Fellows assembled a display to raise awareness about Hamas and kidnapped Israeli solider Gilad Shalit. After tabling for several hours, the pro-Israel students were surrounded by a group of angry anti-Israel protesters, shouting anti-Israel and anti-Semitic slurs. York University is investigating the assault.

The same evening as Oren's speech, anti-Israel activists disrupted a talk at the UCLA law school by Daniel Taub, Senior Deputy Legal Adviser to the Israeli Foreign Ministry. Protestors wearing anti-Israel t-shirts and duct tape on their mouths blocked the stage until the police removed them from the premises. A speech by former Israeli MK Effie Eitam at the University of Pittsburgh last week was similarly interrupted, while Hasbara trained student leaders at the University of Pennsylvania and UC Santa Barbara returned from winter vacation to graphic exhibits commemorating the so-called "Gaza Massacre".

As the spring semester has traditionally been a time of intense anti-Israel activity on university campuses - including an alarming proliferation of so-called "Israel Apartheid Week" events - student leaders are not waiting to react to this type of activity; rather, they are organizing proactive initiatives. Hasbara Fellows from Johns Hopkins University, Boston University, University of Cincinnati, University of Rochester, and University of Ottawa are spearheading an international initiative called Israel Peace Week (IPW), set to take place during the first week of March. Pro-Israel students at more than 20 universities in the US, Canada, England and Australia have joined the IPW movement, organizing programming to educate their peers about Israel's pursuit of peace, its lack of a true partner for peace, its thriving democratic nature and altruistic contributions to the world community. Many schools, including the University of Virginia, Queen's University and York University, are utilizing Hasbara's new campaign, "Hamas: The Obstacle to Peace" to educate their campuses about the real cause of the current conflict, while others like Miami University of Ohio, Michigan State University and Hunter College are screening the new film, "Crossing the Line: The Intifada Comes to Campus" to rally their pro-Israel base.

The alarming disruptions at recent pro-Israel events indicate that anti-Israel activists, faced with sophisticated and engaging pro-Israel movements on their campuses, have little to offer in terms of meaningful response or dialog. Instead, their goal is to limit pro-Israel speech and assembly, mirroring the extremist terrorist groups they support. While we must be on guard against this type of behavior, perhaps we should also view it as a compliment to our efforts and anti-Israel fear in the face of our truth.

Ukraine and the Jews
The Softball Player
How This 6 Generation Bread Baker Brought Back Israel’s Ancient Grains
Olivia Newton John’s Grandfather was a Nobel-Prize Winning Jewish Physicist
Comments
MOST POPULAR IN Israel
Our privacy policy
Aish.com Is Looking for Great Writers