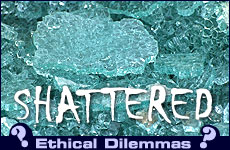 Can Jerry demand a refund or does he share responsibility for breaking the glass table?

Eventually, the Goodmans needed to add an additional table in their dining room to accommodate the growing crowd.

Jerry read online that Mike Gerber was selling a used glass dining room table and matching chairs for $300. Jerry and Lisa drove their van over to Mike's house to view the table. The stunning table seemed like the perfect buy. It was large enough to fit another dozen guests comfortably and Lisa loved the table's style. She thought the chairs were great too.

Before agreeing to buy the set, Jerry asked Mike if the glass was attached to the table. Mike assured him that it was indeed attached. Jerry and Lisa decided to make the purchase, giving Mike three crisp $100 bills.

Jerry and Lisa moved the chairs onto their van parked in Mike's driveway. While Lisa held the door open, Jerry and Mike began carrying the table to the front door with care and precision. As they neared the door, they tilted the table sideways so that it would fit through the door. Suddenly, they felt the weight rapidly shift as the glass top fell off the frame. As it fell, it broke the antique umbrella stand next to the door and then exploded into countless shards on Mike's floor.

Looking over the remains of the table, it was clear that the heavy pane of glass was just resting on four suction cups that attached to the wrought iron frame.

According to Jewish law, what is the status of the sale of the table and chairs? Does Jerry receive a refund? If so, how much?

Does Jerry share responsibility for any of the damage that occurred to the table or the umbrella stand?

• A consumer may rescind a deal upon finding a blemish in the merchandise purchased (Shulchan Oruch, Choshen Mishpat 232:4).

• One is liable for intentional and unintentional damages exacted on an article belonging to a third party. One is absolved from paying for unintentional and completely unexpected damage he or she causes. (Shulchan Oruch Choshen Mishpat 378:1, Sha"ch 2)

The Table and Chairs

While objectively there is nothing faulty with a glass tabletop detached from its frame, Jerry made it quite clear that he would only agree to purchase a table fastened to the wrought iron frame. Consequently, we deem anything short of that a “blemish” in the merchandise. Although Mike did not delude his customers intentionally, nevertheless, the Goodmans did not receive the merchandise they intended to buy. Even if Jerry only confirmed the attachment of the glass top merely to verify that the table could be turned on its side without consequence, the sale would still be considered void. Since the seller made a factually incorrect statement about the metrics of the item, the sale is invalid even though the misstatement was not in regards to an actual "blemish". [Choshen Mishpat 232:1]. Hence, if they wish, they may rescind the entire deal even if they had already performed a legally binding act of acquisition.

Although Lisa wanted to buy the chairs, it is clear that the table and matching chairs were part of one purchase. Thus, if the Goodmans decide to void the sale, they must return the chairs to Mike.

A person is responsible for his or her actions. Hence, one is liable for intentional and unintentional damage he or she causes. Nevertheless, one is not responsible to take precautions against a completely unintentional and unexpected damage. Our situation is a case in point. Jerry had no idea that the glass was detached from the frame. There was no way he could have taken precautions against damaging the umbrella stand. Hence, he is absolved from the damages incurred as a result.

In summary, the Goodmans may demand their $300 back, but they must return the chairs. And Jerry is absolved from paying for the damage to the umbrella stand.

Based on a true story: Submitted by Judah Spetner – Cincinnati, OH.

Through exciting, interactive emails and numerous innovative and multilingual ventures, the Jerusalem-based Fellow-Yesharim Foundation for Ethical Law, reaches out to thousands of our brethren and helps us discover the richness, practicality and timeless relevance of Talmudic ethics in our daily lives. Join our emotionally charged and intellectually stimulating discussions … study your life and realize your story in the Talmud of yore. Find the answer to the above question and discover our Master’s prescription for happy and healthy social living! To join our growing email list, email weekly@projectfellow.org To discover how your talents and wherewithal can help in propagating business law and ethics awareness, email info@projectfellow.org. Dean: Rav Yitzchak Berkovits Executive Director: Rabbi Yosef Y. Ettlinger

The Jewish Ethicist: Worker Ownership I

The Jewish Ethicist - Is It Charity?
Should I Break Up, Get Engaged or Keep Dating?
Time Is Your Precious Commodity
A Constant World in Flux
Comments
MOST POPULAR IN Current Issues
Our privacy policy