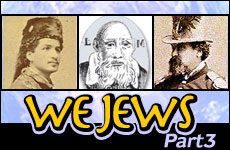 Unsung, unusual and odd members of the tribe.

Into every magnificent culture, a few meshuggeners must fall. But “We Jews” love our shlemiels, shlimazels, shmeggeges, shmendriks, shnooks – and a few other “esses,”not to mention our “whys” – as in “yutz.” Without them, would the rest of us be quite so wise? Benevolent? Hysterical? Busy? Oh ... and a few even made a big splash when they fell ... into or on top of ... something or someone. Here’s a sampling of my choices for We Odd Jews.

The luftmensch king, jack-of-all-trades and successful at none, had to be Leone da Modena. Born poor, in a Jewish Italian ghetto, this 16th century dreamer wanted to be a hit. All he needed was talent – in something – and major mazel. Leone claimed 26 professions, including rabbi, playwright, shadchan, cardshark – and starved from them all. He even tried alchemy, feverishly attempting to turn metal to gold. Alas, the Midas touch, he didn’t have. But, his persistence paid off. He probably holds the record for “Most Misses in a Single Lifetime.” And he’s remembered! – In this column.

A trader in the American Great Lakes area, Chapman was one crafty meshuggener. It seems that while working “his territory” in 1763, he – and his merchandise – were captured during Chief Pontiac's siege of Detroit. Poor “Chap” was condemned to death, which made him thirsty (no doubt from shvitzing). When tied to the stake, he begged for a drink, but was given scalding broth. With nothing to lose, he threw it into his captor’s face! (When We Jews want to eat or drink, don’t fool around.) Well, awestruck, the tribe saw this as a sign of major “mishegossery” – which marked “Chap” as a special favorite of their Great Spirit. They not only released him, they returned his merchandise! The moral? Such is the power of a little chutzpah!

For a brief, shining 20 years, we had an Emperor. A Jewish one. Norton the First. The Londoner arrived in San Francisco in 1849. After failing to corner the rice market, undaunted, he “re-invented” himself, turning from rice to royalty. One day, he appeared at the San Francisco Bulletin, in a shmatte with navy regalia proclaiming himself “Emperor of these United States” which the paper published on September 17, 1859, thus beginning Norton’s reign. Eccentric but beloved, Norton 1 shmoozed with VIPs at 5 star restaurants, and the city picked up the tab for his lodging and uniforms, while San Franciscans bowed when he passed. On a slow news day, the paper could count on the Emperor to liven things up. A few of his more interesting edicts during 1860: “Norton 1 barred Congress from meeting in Washington.” He may have gone too far, when, on October 1, “Norton 1 dissolved the United States” altogether. When he died in 1880, the headline read: “Norton the First, by the grace of God Emperor of the United States and Protector of Mexico, departed this life.”

We Jews have been known for many things, but gun-slinging isn’t one of them. Unless we’re talking about the strange alliance between a Jewish Londoner and SunYat-sen! Born to poor Polish Jewish emigres in 1887, Morris Cohen, managed to connect to revolutionary China – not through diplomacy (in the usual sense). While in a gambling den in Saskatoon, Canada he defended the Chinese owner during a robbery. This was his entre to China and Sun Yat-sen. In 1922, he became his bodyguard and a “General” in the Army-- all without knowing Chinese. Whether his exploits as tycoon, arms dealer, and adventurer made him a visionary, a hustler (or both), Two-Gun Cohen, who packed two pistols was one!

Attired in Native American clothing, standing next to Red Cloud and above the seated Sitting Bull (the less famous one) in a photo called “Sioux Group in Omaha,” ca. 1870 is a Jew. The entrepreneur on the Western Frontier, liked the “spirit” of Native Americans and vice verse. He not only did business with them (he traded artifacts in Nebraska), but, fluent in their languages, acted as an interpreter. Meyer so loved his kinship, he paid Native Americans to pose with him. They returned his love by “adopting” him. The Pawnee named him “Box-ka-re-sha-hash- ta-ka,” or “Curly-headed white chief who speaks with one tongue.”

It wasn’t enough for Romanian Jew, Julius Popper (1857-1893), to manage an Argentine mining company. He wanted a kingdom. He found one in 1887, after getting gold mining rights in Tierra del Fuego -- and named himself king. During his reign, he printed money, even stamps. When “King Julius” returned to Argentina, he died under mysterious circumstances. (A coup, maybe?)

True, We Jews prefer eating matzah balls to throwing basketballs. Ah, but turn “essing” into a sport, and you get a Don Lerman, a top-ranked competitive eater. In fact, Jews comprise a quarter of the top-ranked. (Are we surprised?) Lerman, who often uses the name “Moses,” has downed 12 matzah balls in two minutes and 50 seconds! Eating ... a sport? Experts say more raw guts are needed to win (and hold onto it) than in most other matches. According to another “Ess”star, Leon Feingold, “Jews are very competitive... [they] approach technique intelligently. And they have Jewish mothers, which means they can’t leave the table until they’re done eating, which gives them speed and capacity.” As ESPN has covered Nathan’s hot dog-eating contest and the [chicken] Wing Bowl, can the Maccabiah games be far behind?

In a glowing obituary, The New York Times reported him dead on January 2, 1980. He was alive, well, and busy pranking. In 1959, he created SINA, Society for Indecency for Naked Animals, appearing on the Today show among others, spouting his cause: to provide attire for animals. (A $40,000 donation was refused.) In 1964 and 1968, he ran Yetta Bronstein from the Bronx for President. There was no Yetta, but she did garner write-in votes! Who was this hoaxster? Alan Abel. Wife, Jeanne Abel, his partner in “con,” played the Presidential “candidate.” Her campaign slogan, “Vote for Yetta and things will get Betta,” made headlines. In 2005, their daughter, Jenny Abel, co-produced a documentary, Abel Raises Cain, about her parents’ career as professional “characters.”

Iranian President Puts Forward Middle East Peace Plan
The Power Of Prayer
Va’etchanan 5782: A for Effort
Can You Show Me This "God?"
Comments
MOST POPULAR IN Jewlarious
Our privacy policy
Aish.com Is Looking for Great Writers