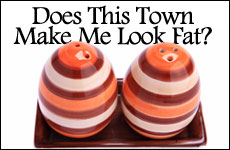 My trip to Beverly Hills made me realize that I like living on the “wrong” side of the tracks.

All I wanted was an elegant pair of salt and pepper shakers. A simple request, right? (If you are a guy, I know what you are thinking: what is it with women and matchy-matchy kitchen stuff? Why does anything have to match, besides your socks? But stay with me, fellas. We will leave the Housewares department momentarily.)

Finding the salt and pepper shakers was complicated because Wedgewood discontinued my china pattern – without even consulting me! This made finding the matching set of shakers, which I never bothered to buy, harder to locate than a celebrity without a personal trainer. And while the shot glass with the Chicago Cubs logo that we use as a salt cellar is a cherished family heirloom, it began to look unutterably embarrassing to me. It was time to make my Shabbat table a little classier.

I discovered that an elegant, not-too-expensive shaker set was available at Nieman-Marcus in Beverly Hills. And while Beverly Hills is only two miles from my home and I drive by it frequently, it is atmospherically as distant as Jupiter.

While Beverly Hills is only two miles from my home it is atmospherically as distant as Jupiter.

I decided to change my outfit to something a little more upscale, to avoid the possibility of my not being allowed into Nieman-Marcus in the first place. Yes, it may seem silly, but even we Target shoppers have our dignity. I was surprised at how many "normal" cars were parked in their lot, but all became clear when I saw the rows of gleaming Ferraris, Range Rovers and Porsches lined up in all their conspicuous ostentation in the valet parking area right outside the store. If you were obscenely rich, your car could be parked here, too!, the cars seemed to whisper.

I always find it unnerving – on the rare instances it happens – to be in stores where merchandise is displayed like museum artifacts, with miles of airspace between each garment or handbag. Stores with this much real estate and so few things to buy have honestly earned nicknames such as "Needless Markup." I'm much more at home in stores where the merchandise is jammed so tightly together you need a crowbar to pry the sweaters apart on the rack. Those are my kinds of stores – not only where we have the proletariat pleasure of laughing at the originally marked prices on the tags, which all have red lines crossed through them, but where you can work up a sweat developing your pectoral muscles, too.

I was disappointed that the salt and pepper shakers at the Needless Markup Museum were not a match for my china, but a kindly staff member suggested I walk a few blocks away to another merchant where she thought I might have success. Or maybe she just wanted my bourgeois self off the premises before I scared away the really rich people.

Either way, as I sauntered off to the other store, I saw a posse of paparazzi anxiously holding their cameras aloft, all angling for a photo of some target at a restaurant across the street.

"Who are you looking at?" I asked one of the photographers.
"Phoebe Price," he said.
"Never heard of her," I answered, thinking that unemployment around here must be even worse than I thought if so many able-bodied guys were all hanging out in Beverly Hills to try to sell a photo of someone who isn't even that famous.

My feeling that I was a stranger in a strange land increased as I walked past stores like Gucci, Prada, Escada, Valentino, Armani, Versace, Dior, Cartier and Tiffany. This wasn't only because I had a sinking feeling I would not find salt and pepper shakers for under $500 when I didn't want to spend more than $50, but I seemed to be the only woman on the streets (aside from three middle aged Asian tourists) who wasn't a size zero, wearing skinny jeans and stiletto heels, and who wasn't walking a dog the size of a breakfast muffin on a rhinestone-studded leash. Or were they diamonds?

I never feel this way when I'm shopping at Target, I grumbled silently. Even dressed up and donning my hippest-looking dark sunglasses, I could not overcome the distinct feeling that I was completely out of place. Like Dorothy in the Wizard of Oz, I wanted nothing more than to click my non-stiletto heels and go home, although I hoped that doing so wouldn't land me in Kansas, where I suspect it's hard to find a good bagel.

After striking out at the second store also, I headed back to my humble car, tucked away in the poor person's lot near Needless Markup. The paparazzi were still staked out at the restaurant, but this time they were jumping around like a band of excited Kindergarteners, snapping photos up close at that Phoebe what's-her-name. I couldn't believe it. I asked another of the photographers, "What is the big deal with this person, anyway?"

"Her name is Paris Hilton," he explained patiently, as if to a slow child. I wouldn't blame him if he thought I had been dropped down from a corn field in the middle of Amish country. "She had a reality TV show," he said, having quickly summed up her professional achievements. "Today's her birthday, and she's sitting over there," he said, pointing to one of several thin blondes. Who could tell them apart, especially when they were sitting in the shade of the restaurant?

Well, even I had heard of Paris Hilton, though as far as I could tell, she was only famous for being famous and fatuous, a very common combination in Hollywood. I peered across the street at the gaggle of Cartier-carrying, Armani-armed young women, and wondered if they were all having salad for lunch, no dressing, to stay that thin. I also wondered if the guy who was looking for Phoebe Price realized he was missing the big tabloid scoop.

Just as I caught myself feeling sorry for her because of all the media attention, it dawned on me that Paris chose to sit outside, making this a likely strategic decision on her part.

This episode made me very happy that great fame as a writer has continued to elude me for all these years. I would hate to have people hanging around waiting to take my picture, especially at lunch. Who needs the pressure? If you had spinach salad and a bit got stuck in your teeth, it could be on the cover of People magazine! And if you ordered dessert, the media would speculate that you had let yourself go, even if you still didn't weigh enough to give blood. Although I came home still salt and pepper shaker-less, I did come home with something more satisfying, and cheaper: gratitude that I am not now nor will ever be a likely target for underemployed paparazzi in Beverly Hills.