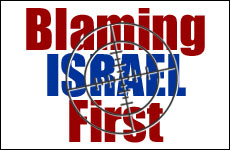 Business as usual at the U.N.

No military in the history of warfare has tried harder, when obliged to fight, to protect noncombatants than the Israel Defense Forces.

It is therefore a bitter irony, fraught with consequences for the legitimacy of international law, that -- with the same possible exception -- no country’s military, judiciary, and democracy have been the target of greater vilification for alleged human rights violations, war crimes, and crimes against humanity than Israel’s.

The continuing controversy over the Goldstone Report is a case in point.

In April 2009, the Geneva-based U.N. Human Rights Council appointed Richard Goldstone, judge of the Constitutional Court of South Africa and former prosecutor of the International Criminal Tribunals for the former Yugoslavia and Rwanda, to head a mission to investigate all violations of international human rights law and international humanitarian law that might have been committed at any time in the context of the military operations that were conducted in Gaza during the period from 27 December 2008 and 18 January 2009, whether before, during or after.

On September 15, the mission released its 575-page report. The bulk was devoted to alleged Israeli misconduct in Operation Cast Lead, which aimed to stop the more than 12,000 rockets and mortars fired over eight years by Hamas and other armed Palestinian groups at civilian targets in southern Israel. The report firmly and in vivid detail accused the Jewish state of human rights violations, war crimes, and “actions” that “might justify a competent court finding that crimes against humanity have been committed.” Tentatively and briefly, the report also found that “it may be that the Palestinian combatants did not at all times adequately distinguish themselves from the civilian population” and that Palestinian rocket and mortar attacks on Israeli civilians “would constitute war crimes, and may amount to crimes against humanity.”

The document recommended that the Security Council require Israel and Palestinian authorities to report, within six months, on the investigations and prosecutions international law obliged them to carry out. Should Israel fail to make good progress, the report recommended that the Security Council refer the mission’s allegations to the prosecutor for the International Criminal Court. The report’s recommendations concerning the Palestinian authorities were decidedly more tepid.

On November 3, the U.S. House of Representatives, by a vote of 344-36, passed a nonbinding resolution rejecting the report as “irredeemably biased.” Two days later, the U.N. General Assembly, by a vote of 114-18, adopted the report and sent it to the Security Council.

The Security Council has declined to take action. But damage has been done. By pervasively insinuating that Israel is no better than, and in some respects worse than, the terrorists it battles, the Goldstone Report hands Islamic extremists another propaganda victory. Credulous European and American intellectual and political elites have already casually imbibed the opinion that Israel deliberately attacked civilian targets to terrorize Palestinians and destroy the foundations of civilian life in Gaza.

Goldstone’s mission was suspect in Israel’s eyes from the outset. The Human Rights Council that commissioned it is disreputable. It includes among its 48 members China, Cuba, Egypt, Pakistan, and Saudi Arabia; notwithstanding the gross violations of human rights of which many of its members are guilty, it has made a priority of condemning Israel. In addition, statements about Operation Cast Lead and the Israeli-Palestinian conflict made before their appointments by two of Goldstone’s three mission colleagues -- Christine Chinkin, professor of international law at the London School of Economics, and Hina Jilani, advocate of the Supreme Court of Pakistan -- could reasonably be seen as prejudging Israel’s guilt. And from the General Assembly’s 1975 resolution declaring Zionism a form of racism to the International Court of Justice’s 2004 ruling that Israel’s security barrier violated international law and must be dismantled, Israel has learned to expect from international bodies hypocrisy, slander, and scorn for its security.

Consequently, the Israeli government’s decision not to cooperate with Goldstone, while still controversial in Israel, was understandable. The mission’s mammoth report, written in unseemly haste, confirmed Israel’s doubts.

- First, it presents as settled that, despite completely withdrawing from Gaza in 2005, Israel remains under international law an occupying power with attendant obligations because it controls Gaza’s borders. In reality, the legal question is very much in dispute. Israel’s famously progressive and activist Supreme Court has ruled that the country no longer occupies Gaza. And as Col. (Ret.) Daniel Reisner, former head of the IDF’s International Law Department, pointed out to me, even the International Committee of the Red Cross considers the question to be difficult and unresolved.

- Second, the report blames Israel for causing humanitarian suffering by imposing a blockade on Gaza. In the process it dismisses the heroic efforts the IDF made in the midst of last winter’s military operation that increased food, medicine, and fuel entering Gaza. Nor does it examine Hamas’s theft of these humanitarian supplies or exploitation of Israel’s daily humanitarian pauses to launch rockets at civilians in Israel and attack the IDF in Gaza. And the report fails to note that Egypt controls Gaza’s western border, imposing restrictions more severe than Israel’s -- this although the mission itself entered Gaza through the Egyptian-administered Rafah crossing.

- Third, the report accuses Israel of violating the laws of war by killing more than 200 civilian Palestinian police officers. In so accusing, the report relied heavily on Palestinian testimony and ignored or dismissed openly available information showing that Hamas also assigned the police a military role and ordered them, in the event of a ground operation, to fight the IDF.

More generally, the Goldstone Report suffers from fatal methodological flaws. While subjecting Israeli accounts of wartime operations to hyper-exacting scrutiny and relentless skepticism, it routinely accepts Palestinian testimony of alleged Israel crimes at face value, rarely if ever wondering whether Gazans regarded representations to the mission as acts of resistance. This is of a piece with the report’s systematic failure to give due attention, as the laws of armed conflict direct, to military necessity, which in this case means the precautions feasible for reasonable IDF commanders to make in the harsh conditions of urban warfare against an enemy relentlessly striving to blur the distinction between civilians and combatants.

The Goldstone Report barely mentions Hamas and glosses over the terrorism to which it is devoted.

Finally, while the Goldstone Report goes to extravagant and irrelevant lengths to put Israel’s Gaza operation in context by discussing the larger sweep of the Israeli-Palestinian conflict, it barely mentions Hamas and glosses over the terrorism to which it is devoted. To understand Israel’s operation, however, it is crucial to grasp Hamas’s frequently reiterated determination to wage jihad to destroy Israel. It is also vital to appreciate that Hamas blatantly violates the laws of armed conflict by deliberately transforming Gaza City and other densely populated areas into military bases. From these locations, using its own people as human shields, Hamas launches its rockets and mortars at Israel’s civilian population -- ensuring that Israeli operations aimed at ending those attacks will make Israel a killer of Palestinian civilians.

No doubt, like all armies, the IDF made errors in Operation Cast Lead. And in the infernal smoke and fire of asymmetric urban warfare its soldiers and officers may have committed crimes. In the short term, Israel’s Military Advocate General’s Corps continues to investigate allegations and to pursue substantial ones. A military task force established to examine the Goldstone Report’s allegations headed by Brigadier General Yuval Halamish expects to publish its findings at the end of January.

The long-term stakes, according to General Halamish, are high: “The fundamental problem applies not just to Israel but to all democratic nations --if they accept the Goldstone Report’s approach and conclusions, they will not be able to fight terror.”

This article originally appeared in The Weekly Standard.

Peter Berkowitz is the Tad and Dianne Taube senior fellow at the Hoover Institution, Stanford University.

Who Are We Fighting?

Time to Proclaim: I Am A Jew

Our Enemy Is One

Jenin: The Truth
Adam and Eve Were Vegan
Bechukotai 5782: Divine Retribution
Behar 5782: Working to Live or Living to Work?
Comments
MOST POPULAR IN Middle East
Our privacy policy