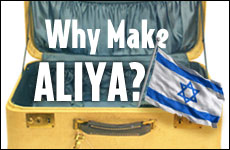 For a Jew, there is no better place than Israel.

Roughly 15 years ago I made a personal decision to leave the comfortable lifestyle and familiar surroundings of America in order to settle down and build my life in Israel.

As important as this decision was, it had nothing to do with any negative feelings that I had towards the US. In fact, just the opposite is true and most of my memories of life in America are very positive. From childhood vacations in the Lake George region of upstate New York, to a couple of cross-country ventures in my mid-20s, to a few years of life in the middle of New York City, I can honestly say that the United States is really one incredible, beautiful country. Furthermore, the variety of quality choices and lifestyles that are available in an enormous country of nearly 300 million residents truly makes settling down in America such an attractive option.

Nonetheless, despite all the wonderful things that can be said about America, I would not trade for a second the life that I have built in Israel. Moreover, I am 100% convinced that there is no place in the world that is potentially more suitable for a Jew to live than in the Land of Israel. To someone living outside of Israel this may sound like quite a bombastic declaration, but nonetheless this does not detract from the veracity of the statement.

The problem is the chicken and the egg factor. Only by living here and experiencing the reality of life in Israel can one honestly come to such an internal realization. Thus, to a Jew who still lives outside of Israel, it is only natural that such a statement will be somewhat incomprehensible or perhaps even irritating.

Nonetheless, I would like to present a short list of positive reasons for a Jew to consider building a life in Israel:

1. Percentage-wise the best chance to find a Jewish spouse is in Israel.

2. Statistically the lowest rate of intermarriage is in Israel.

3. Within a few short hours one can hike in the desert, swim in the Mediterranean, ski on the Hermon or float in the Dead Sea.

4. Jewish holidays are a natural part of the lifecycle here.

5. There is no Christmas shopping season in Israel.

6. The cost of Jewish education in Israel is a fraction of the cost in the US.

7. In Israel there is a feeling of "home" for the Jewish people.

8. Israel is the only Jewish country in the world. There are no others.

9. In Israel a Jew does not have to integrate into a non-Jewish society.

11. Mitzvah observance and their significance take on a whole different meaning in the Land of Israel.

12. There is only one Jerusalem in the whole world and it is here, in the Land of Israel.

13. After a few thousand years, Hebrew, the language of the Prophets, is once again heard throughout the Land of Israel.

14. Israel boasts the fastest growing Jewish population in the world.

15. After a long respite of nearly 2,000 years, Israel is once again the physical and spiritual center of the Jewish people.

16. History is literally unfolding here in front of our eyes. All that has transpired here during such a relatively short time period is nothing short of mind-boggling. As such, there is an incredible and unique opportunity available to any Jew throughout the world to come to Israel and to actually have an impact on the shaping of history.

In summary, the greatest potential for a Jew to be in tune with his real self, to live his life according to his true inner voice, is here in the Land of Israel. In this respect there is absolutely no comparison to anywhere else in the world. As great as America might be, and I say this as a former American who has nothing but fond memories of the US, the best home for a Jew is in the Land of Israel. It's really that simple.

Yoel Meltzer has an MA in Middle Eastern Studies and lives in Israel.

US Ambassador at Mir Yeshiva

Newsworthy
The Miami Boys Choir is Taking over TikTok
Caramelized Onion and Pumpkin Pirozhki
For Every Individual, A Torah Scroll
Comments
MOST POPULAR IN Israel
Our privacy policy
Aish.com Is Looking for Great Writers