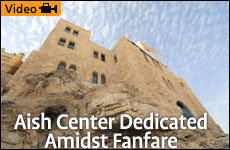 Dignitaries join in launching new building at the Western Wall. 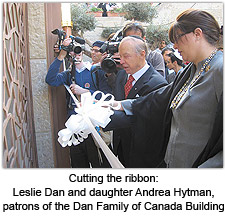 The holy air of Jerusalem was thick with excitement in December 2009 as Aish HaTorah dedicated its spectacular-new educational center across from the Western Wall. The dynamic week of activities included touring, lectures and meetings with Israeli officials.

The festivities hit full stride with the ribbon-cutting ceremony performed by Leslie & Anna Dan and Stuart & Andrea Hytman, patrons of the Aish World Center Dan Family of Canada Building. Mr. Dan is the founder of Novopharm, one of Canada's largest generic pharmaceutical companies. 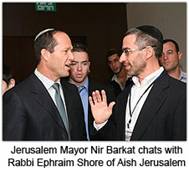 This was immediately followed by the dedication of a new Torah scroll – amidst spirited singing and dancing – sponsored by the family of Rabbi Naftali Schiff, executive director of the Aish UK branch, in memory of his father.

“It was important that the Torah scroll dedication be the first official event in the new building,” explained Rabbi Hillel Weinberg, dean of Aish HaTorah. “This scroll symbolizes the entire purpose of the Aish facility – to spread the light of Torah to those who visit, and from there to inspire the entire world.” 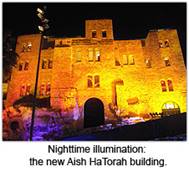 This was followed by a gala luncheon featuring the Mayor of Jerusalem, Nir Barkat, who spoke of how the new Aish HaTorah building will significantly upgrade the opportunity for Western Wall visitors to explore the meaning of their Jewish heritage.

The opening day festivities were punctuated by the unveiling of the “Rabbi Noah Weinberg Tribute Wall” – an interactive display featuring short films and touch-screen access to all of Rabbi Weinberg’s teachings – in honor of the founder of Aish HaTorah who unfortunately did not live to see this building project come to fruition. “Rabbi Noah Weinberg dedicated his life to showing Jews the beauty and wisdom of their heritage,” said Aish HaTorah CEO Rabbi Eric Coopersmith, ”and this Tribute Wall will keep that message alive.” 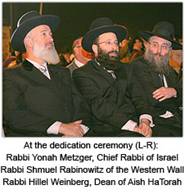 The climax came the next evening when hundreds of students and supporters gathered at the Western Wall Plaza for the official dedication ceremony. With the six-story Aish building as a backdrop, Israel’s Chief Rabbi Yonah Metzger praised the new facility for combining Aish’s educational know-how with cutting edge technologies – all in the world’s most inspiring location.

The dedication ceremony concluded with the rousing performance of a boys’ choir, and the premier of a new short film featuring the wisdom of Rabbi Noah Weinberg. With great symbolism, the film was projected onto a giant “outdoor screen” – the exterior of the new Aish building. 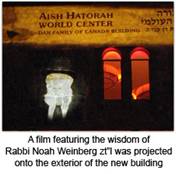 Following the ceremony, a gala banquet dinner was held in the building’s spacious dining room with its spectacular view overlooking the Temple Mount. Dr. Stuart Hytman spoke of how Aish HaTorah has personally influenced his family to Jewish connection and pride, and empowers the Jewish people to fight assimilation and to fulfill their destiny of Tikkun Olam (perfecting the world).

Click below to view a fascinating 6-minute film about the building's remarkable history.

The new center now hosts the thousands of annual visitors to Aish HaTorah educational programs including the world-famous Discovery Seminar, the Jerusalem Fellowships leadership program for college-age students, the Hasbara Fellowships for Israel activism training, the Executive Learning Center and the Essentials program. As well, private individuals and organizations can arrange for events like bar mitzvahs, weddings and Shabbat dinners in the beautiful dining room or on the spectacular rooftop terrace. 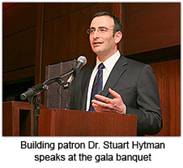 Also slated for the new building is an interactive museum of Jewish History, a major attraction spanning three floors that takes visitors through a virtual tour of all of Jewish history in a highly interactive, hi-tech environment. Designed to accommodate 300,000 people annually, the museum is currently in production with a world-class team of museum designers and is expected to be completed in two years.

Click below to view a 2-minute highlight film of the week’s activities:

The Dead End of Jewish Culture

One People, One Heart?
Three Ways to Make Yom Kippur Meaningful
The Joy of Fasting
The 21st President of the United States: Failure or Inspiration?
Comments

Three Ways to Make Yom Kippur Meaningful
The Joy of Fasting
The 21st President of the United States: Failure or Inspiration?
Hiding Their Jewishness
The Jewish Pope: Following the Questions Home
How Did I Miss It?: Rosh Hashana
Where's Waldo and the Design Argument
Bagels, The Ghetto, and Yom Kippur: A Journey into the Bagel’s History
Homemade Bagels
Coronating the King: 4 Ways to Prepare for Rosh Hashanah
1 2 3 … 2,912 Next »