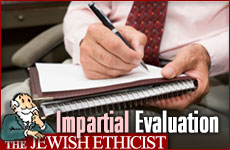 Strive for impartiality even in the presence of petty feuds.

Q. Part of my job is to evaluate workers at my place of work. I have negative feelings towards some for reasons unrelated to work performance. How can I prevent this from affecting my evaluations?

We indeed find that the Talmudic sages went out of their way to avoid any subjective influence of this kind. The Talmud tells us that as the sage Shmuel was on his way to judge a case, a passerby offered him his hand to help steady him as he alit from a ferry. When Shmuel learned that the helping hand belonged to a litigant in his court, he recused himself from the case. Similarly, as the sage Ameimar was preparing to judge a case, a bird settled on his head; a nearby person removed it. Again, when Ameimar discovered that the helping hand belonged to a litigant he recused himself. The Talmud goes on to bring similar stories regarding the sages Mar Ukva and Rebbe Yishmael beRebbe Yosi. The Talmud calls this kind of effort to obtain favoritism "verbal bribery". (1)

Yet if we look into the authoritative law we find that the conduct of Shmuel and Ameimar was beyond the letter of the law. The Talmud does indeed state:

However, the actual criteria for this disqualification are actually quite narrow. The "friend" who requires the judge to recuse himself refers to a very close friend; the Talmud gives the example of someone who is best man at a wedding. And the "enemy" is someone who is so detested that the two haven't spoken to each other in days as a result of their enmity. (2)

Furthermore, the Talmud concludes that even these narrow criteria apply only to a judge, but not to a witness. A witness doesn't have to exercise judgment but only to report facts; the Talmud states that children of Israel "are not suspected" of exercising such blatant favoritism from the witness stand. (2)

Another relevant point is made by the renowned sage of the last century, Rabbi Yisrael Meir HaKohen of Radin, known as the "Chafetz Chaim". Rabbi HaCohen writes that even when informing on a wrongdoer is essential to achieve a worthy constructive aim, it should not be done if the informer lacks constructive intention. For example, if the outcome is constructive but the intention is vindictive, then it is better to remain silent. But Rabbi HaCohen adds that there is another solution: to put one's vindictive intentions aside. "He should compel himself at the moment he makes the disclosure to have solely a constructive intention, and not as a result of enmity."(3)

So given that your negative feelings do not reach the level of true enmity, you are qualified to pass professional judgment on others in your workplace. Even so, you should take to heart the Chafetz Chaim's advice and when you make your judgment, make a special effort to remove extraneous considerations from your thoughts.

The Jewish Ethicist: Office Gossip
Faith: the Axis Upon Which the Wheel of Science Turns
Love - Not Just About Chemicals Anymore!
Is There a Moral Code in a Virtual World?
Comments
MOST POPULAR IN Current Issues
Our privacy policy