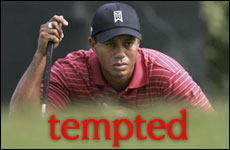 Tiger Woods and the choices we make.

The Tiger Woods saga hardly rises to the level of Greek tragedy.

Yet watching the wreck of Woods’ career, one experiences something of the horror that Athenian audiences felt. His descent was every bit as precipitous and sudden as that of Oedipus upon learning that Jocasta was his mother. A month ago, he was the most admired man in the world. One could not walk around the corner in any major metropolitan airport in the world without confronting Tiger’s smiling visage or his hand raised in triumph on some 18th green.

Today, he is the non-stop butt of every comedian on the planet, and could not show his face in public without the sure knowledge that everyone is pointing at him and sniggering. The advertisers who made him the first sports figure to garner a billion dollars in endorsements are dropping him right and left. It is not even clear that he can regain his status as the world’s best golfer. Last year, after reconstructive knee surgery and missing the opening months of the golf tour, he still won six tournaments, far more than anyone else. But as one competitor put it, "He could still be the greatest golfer in the world with a broken leg; it is less clear what impact a broken psyche will have."

In Greek tragedy, terrible things do not just happen to the hero; he brings them upon himself. Those things that we term tragic today – disease, natural disaster – events where any explanatory connection to the victim is totally obscure, were not tragic for the Greeks. What aroused their cathartic horror was watching the unfolding drama, in which a person blessed with both good fortune and many gifts self-destructs.

It still does today. For all the efforts to reduce the Woods saga to the stuff of jokes, I suspect that there are many who have experienced the chilling thought: If even Tiger Woods, sitting on the top of the world, could cause his secure life to dissolve overnight, how can I be sure that I will not do so as well? Surely, there has been more than one person on the planet tempted by the frisson of sexual adventure who has reconsidered, in light of Woods’ fate, whether the momentary thrill could possibly be worth the potential for harm. "Calculate the enjoyment of the sin against its cost," our Sages advise us.

The fear of becoming such a laughing-stock may be Tiger’s greatest gift to mankind.

Most of us try to cultivate a certain image that we present to the world. And accordingly, we are vulnerable to becoming laughing-stocks in the eyes of our "world," however large or small, if our private behavior deviates far from the image we wish to present. The fear of becoming such a laughing-stock may be Tiger’s greatest gift to mankind.

Some may assume that all Tiger Woods’ many words about how his family is the most precious thing in the world were the products of a slick press agent, lacking even the barest modicum of sincerity. I’m not one of them. I suspect the love and admiration he has expressed on so many occasions for his father Earl, a Lt. Colonel in the U.S. Army, and his mother is deeply felt. And if so, how devastating it must be for him to realize that his own children will never grow up to speak of him as a role model for them in the same way.

In all likelihood, Woods loves his children, perhaps even his wife. The trysts were not something he engaged in because he did not care about his children, but, as Bill Clinton once explained, "because he could," or at least thought he could, without consequences. His unmasking will make it a little harder for the next pleasure seeker to push all thought of consequences out of mind.

What happened to Tiger Woods is notable only because of the magnitude of the crash and the fact that it is taking place in full public view. But sexual adventurism is only one of many ways to risk one’s happiness, and Woods is far from alone in having destroyed his life. If we look about us, we would note that the number of those whose lives are destroyed by their own behavior and the bad choices is far larger than those struck with cancer or other tragedies beyond their control.

Rabbi Berel Wein records in Vintage Wein the story of vastly rich family that fell into endless litigation over the will of the source of the family fortune. At the time of the latter’s death, the value of the estate was sufficient to guarantee each of his heirs and their children a life of financial security. But because the estate was tied up in litigation, the heirs were unable to sell off real estate holdings before the bubble burst. After years of protracted litigation, they were left with an estate worth almost nothing, and hundreds of millions of dollars in legal bills and back taxes owed. Each of us could multiply such tales endlessly.

There is a crucial difference between those who squander their own happiness recklessly and those who are visited with the trials of the biblical Job. In the latter category – those who lost their loved ones in the Holocaust, parents of numerous children with severe disabilities, sufferers from life-threatening disease – one still finds many who present a smiling countenance to everyone they meet and continue to approach life in a positive, upbeat mode. They can still rejoice in God’s blessings, and find satisfaction in dealing with adversity.

Among those who have made a mess of their own lives out of an inability to control their desires or temper or by virtue of self-destructive decisions, one never encounters a happy person.

Constant, intense efforts at character development, including knowledge of one’s weaknesses and the ability to anticipate the consequences of one’s actions, is, at the end of the day, the only protection of against making a terrible botch of our lives.

Looking into Other People’s Windows