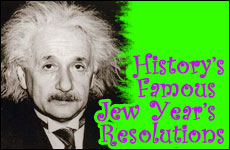 A selection of some of the most famous of our people’s New Year’s resolutions, taken from their “actual” diaries.

If you’re anything like me, and I’m really sorry if that’s the case, you make New Year’s resolutions twice during the year – first in September, during the Jewish New Year, Rosh Hashana. Then, some time toward the end of December, once you realize you’ve done nothing at all about those resolutions, you give ‘em another shot with the approach of the non-Jewish New Year. Which is a long way of saying that your second chance to renew those resolutions is now here. Need inspiration? You’re in luck. My extensive research at the Historical Institute of Jewish New Year’s Resolutions has paid off. Here is a selection of some of the most famous of our people’s New Year’s resolutions through history, taken from their actual diaries.

As a Jew, this is your second shot at a New Year’s resolution.

“I will spend less time attempting to unravel the mysteries of the space-time continuum, and more time seeking out an effective hair detangler. My current mop of unruly hair is scaring away children and dogs and giving me the look of a mad scientist. Granted, once I get my hair under control, I will no doubt miss the three sparrows who have made their nests within it, but life is change. If you don’t believe that life is change, I can prove it to you through a series of advanced physics formulas. But I digress.”

“I resolve to find a new way to think of my mother and father. While I’m surely not the only adult male who dreams nightly of killing my father and marrying my mother, I remain unconvinced that this is a 100% healthy and well-adjusted urge. I long for the day when I shall be able to go fishing with my father without becoming tempted to push him overboard.”

“My New Year’s Resolution is the same one I’ve had since I was four years old -- to be the most famous pants-maker in the world. I may have flunked out of high school and college, messed up my bar mitzvah Haftorah reading, and have had a dating life less active than a monk’s, but I know pants. One day, my name will be on all of their rear ends. My pants will be sold in their own stores, called The Gap, after this distinctive space between my teeth. Then, maybe Esther Goldfarb will go out with me, but it will be too late. “You had your chance, Esther,” I’ll tell her. “Now, I can have any woman in the world. And I’ll give her entire family free pants for the rest of their lives, so eat your heart out!”

“Even though I’m only 14, I resolve to become a successful and famous song writer – which is nice work if you can get it. On what basis do I think this will happen? When folks tell me, 'George, you’ve got plenty of nothing,' I tell ‘em, 'That ain’t necessarily so.' See, for one thing, I got rhythm. They can’t take that away from me. And when you’ve got rhythm, who could ask for anything more? At least in the summertime, when the livin’ is easy. ‘S wonderful. And eventually, I’ll meet the girl of my dreams, we’ll move to Swanee and be happy forever ‘cause our love is here to stay. And I’ll never have to worry about being alone because I’ll have someone to watch over me. In fact, just to prove my appreciation to her, I’ll build her a stairway to paradise.”

“Now that I’ve invented the polio vaccine, I resolve to return to completing my life’s most important project – developing the perfect chocolate pudding. I’m not just talking about the taste; I also mean the appearance and texture. And I’m not just saying this because Kraft Foods has offered me a $10 million position to create the perfect pudding. I’ve wanted to since I was a boy. But I got side-tracked by this polio thing. Eventually, when my pudding takes the world by storm, I’d like to appear on the radio and TV talk shows, get starring TV and movie roles, run for President, get the Nobel Prize and be awarded sainthood. But mainly I’m in it to help the sick.”

“In the coming year, I would really like to find my house key. It seems to have just disappeared. I blame myself for not having a spare key made. Also, just once, I’d like to date a woman who doesn’t insist that I tie up my hands and legs, blindfold myself, hop into a trunk and escape. In addition, the fact that my butcher will only offer me a discount if I can make him levitate first – is getting a bit annoying. Finally, I can’t even walk outside to get a newspaper without some little kid begging me to show him or her magic tricks. It’s such a burden being the very best in the world at something. How I long for the days when I was merely mediocre.”

Buzz Off
Scientific Curiosity and the Divine Encounter
Mind Over Milkshakes
Love the Convert
Comments
MOST POPULAR IN Jewlarious
Our privacy policy
Aish.com Is Looking for Great Writers