8 Things You Should Never Say to Your Spouse 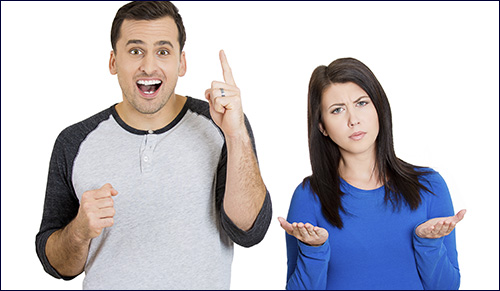 Refraining from saying certain things is just as important as what we say.

We didn't know the newlywed couple very well but friends of ours had asked us to invite them over. It took less than a minute of dinner table conversation to see that they weren't getting along very well.

When I asked them how they met, they immediately launched into an argument about it. That's not how it happened. Yes, it is. No it's not. You're wrong. I asked you to stop saying that to me all the time.

At first my husband and I just sat there in a state of mild shock and growing discomfort. Then I tried interrupting them: "Um, guys, it's okay. It doesn't really matter how you met. Do you want some rugelach maybe?"

They turned to look at me in surprise and then the husband said, as the wife simultaneously reached out for a chocolate rugelach: "No thanks, we're watching our weight." He then glared at his new wife as she ate.

"I think I'll go get some fruit for everyone," I said brightly.

"I'll help you," my husband said quickly, and we escaped to the kitchen to try to figure out what to do.

Sometimes a couple descends into this cycle of hostility and bickering because they don't know how to communicate with each other. Refraining from saying certain things is just as important as what we say. Here are the top eight things we should never say to our spouses.

Differences in My Marriage

6 Ways to Stay in Love Forever

Intensifying Love Through Giving
Saadiah Gaon, Rashi and Maimonides: How Three Rabbis Revolutionized Judaism
King Sennacherib and the Siege of Lachish
Three Small and Easy Changes to Add Positivity in Your Home
Comments
MOST POPULAR IN Family
Our privacy policy
Aish.com Is Looking for Great Writers