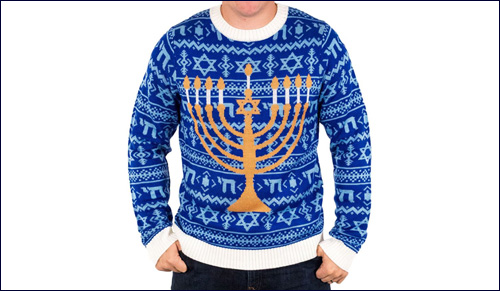 In honor of the 8 days of Chanukah, here are 8 people in every shul. Even yours.

The Jewish community is a physically, mentally, and spiritually diverse group of people. Every shul has somebody with a different life story, from Jews-By-Choice to lifelong adherents.

Here’s one thing that’s absolutely true: you can’t put most Jews in a bubble. That being said, you can put them in exactly 8 bubbles!

So next time you’re at shul look for these 8 different types of people:

We all know this guy! Whether it’s a Mets kippah or one with a Nike swoosh he likes to show off his fun sense of humor and deep sense of spirituality at the same time.

You can see this guy as a member of every kiddush club. He’s also around at every Oneg Shabbat, eating far too-much rugelach for a man of his age.

2. The Guy Who Yells at You for Coming Late

We’ve all been there. You’re rushing to make it to shul on a Tuesday, and you happen to be a minute or two late. You still made it for davening, but they already started pesukei d’zimra – the introductory prayers.

Not a big deal, right? Not according to this man, who instantly approaches you as you take out your Tefillin. “Late” he grunts.

When you look around, you have to assume it’s true. After all, it’s not like other people are rushing in to shul late.

3. The Guy who Comes In the Middle of Aleinu

Except for this guy! Why even show up if it’s going to be in the middle of Aleinu – the very last prayer? I guess it’s important to make sure there’s a minyan for kaddish, but was that not important at the beginning or even middle of the service?

Somehow, the previous guy never yells at him, maybe because he’s a little bit older. Or maybe he’s so late that he’s too far gone.

4. The Guy who’s Too Into Throwing Candy at a Bar Mitzvah

It’s customary to throw candy at a bar mitzvah boy. And it’s fun. But have you ever noticed that there’s always somebody who seems to enjoy it a little too much.

Should you be concerned? Should you say something? Should you stop throwing just to remind the Bar Mitzvah boy that a positive adult role model has limits as to how hard they’re willing to throw a jelly bean at a child?

On the other hand, this guy is pretty respected in the community. Did he manipulate his way to the top through the threat of a thrown jelly beans? Better keep throwing, or else you’ll be next. It’s self defense.

5. The Guy who Fell Asleep 15 Minutes Ago, But He’s Old So We Aren’t Going to Say Anything

We should try to respect the elderly. And sometimes, the elderly need to take frequent naps. So when you see this guy sleeping through the Torah service, you shouldn’t think it’s a problem.

That being said, you can silently judge him a little bit. I mean, if only to show HaShem that I would never fall asleep during the service. And if I do, it’s different because I clearly have an excuse.

6. The Guy who Cries While Davening

We’re not sure if we should be jealous of his connection to G-d, or see if everything is OK. We all get emotional while we daven, but this is getting a bit ridiculous. It’s particularly interesting during Tachanun, when he proves that a person can start crying when they’re already in the middle of crying. Wow!

For a bonus, you should talk to this person after shul to see them act like nothing happened at all. It’s a fascinating experience.

7. The Guy in Pajamas

But why is this guy still wearing his pajamas? At Mincha? I’m not sure if it’s better to be annoyed or jealous. On the one hand, you should at least put on a tee-shirt and jeans by this point. But on the other hand, it does seem extremely comfortable.

At least we know he has slippers for Yom Kippur.

8. The Guy who Makes Judgmental Lists of People In Shul

We all know this guy. He sits around in shul, and makes clever observations about the people around him. Some of them are even a bit mean. Then, when it’s time to engage with the community, he vanishes.

Where does he go? Home, of course. There, he writes lists of the people he saw and sends it to the humor sections of respected publications in the Jewish community. Ugh, this guy is the absolute worst.