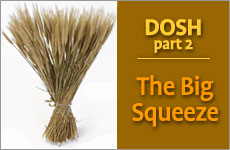 The prohibition of squeezing juice from a fruit.

In our previous lesson, we discussed the melacha of Dosh. We learned that the essence of this melacha is separating a naturally growing item from its covering (such as a shell or peel). We'll now address one of the most common applications of this melacha.

(iii) Squeezing Juice from a Fruit

Let's pay a visit to Melissa. She is in her kitchen, getting ready for a Shabbat meal. Among the items planned for her menu are fresh squeezed orange juice, green olives, and baked salmon.

Melissa will need to be aware of the laws of Dosh before preparing the meal. Why? Because the process of removing juice from a fruit is similar to removing an edible item from an inedible shell. When a person wants only the juice, the fruit is, for his purposes, 'inedible' at that moment.

So, a person is not permitted to squeeze juice out of a fruit on Shabbat, whether the juice is being squeezed into a container or into another liquid.1 This restriction applies to nearly all fruits, but there are important distinctions. We'll look at three different groups:

Olives and Grapes – Why are the juices of these two fruits different from all others? In halacha, there are seven liquids which are considered to be significant3; all other liquids are of secondary importance. Olive oil and grape juice (wine) are on the "important" list. When we 'remove' these liquids from the fruit, it is considered Dosh according to Torah law.

Berries, Pomegranates, and most other fruits – Even though the halacha treats all liquids alike except for the seven special ones, the Talmud mentions the juices of berries and pomegranates as being important drinks. These fruits are sometimes eaten as fruits, and sometimes squeezed for the juice. Today, this category is broader, since many fruits are used for their juice. Common examples include apples, oranges, pineapples, grapefruit, and so on. This category is cross-cultural: any fruit that is used somewhere for juice is included.

The Sages prohibit squeezing juices from these fruits as well.4 (This is a step below Torah law, but of course still necessary to observe.)

Melons (and the like) – There is a small group of fruits which almost no one uses for juice. The main example is melons, such as cantaloupe and watermelon. (There might be other examples, but I haven't found any). Since these items are not juiced, the Sages did not extend the prohibition to them. Therefore, if you want to squeeze out juice from a watermelon, you may do so.5

What does this all mean for Melissa? So far, she knows that she can't squeeze the oranges to get the juice. (Packaged OJ will have to do.) What about the other foods she's serving?

(1) Even if Melissa isn't squeezing the olives to get the 'juice' (that is, the oil), when she cuts them, some oil may seep out. This action is forbidden, and the juice may not be used. A way to avoid this is to cut the olives in a way that any resulting liquid won't be usable. For example, she could cut them on a paper towel, so the liquid will get absorbed.6

(2) Also, some oil may seep out of the olives on its own. (This isn't as common with packaged olives, but if you buy fresh ones, it may happen.) She wouldn't be allowed to use this oil on Shabbat. This concept is known as mashkim she-zavu (literally, 'liquids that flow out on their own').

When it comes to fruits other than grapes or olives, any liquid that seeps out on its own would be usable, so long as the fruit in question was prepared for eating, not for juicing.7

Also, it is permitted to squeeze juice from the fruit directly into your mouth – e.g. by putting a hole in an orange and sucking. However, this method is not permitted for olives and grapes.8 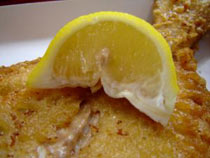 Squeezing onto a solid – This is where the salmon comes in. Let's say that one of Melissa's guests wants to squeeze some lemon juice onto the fish for flavor. This would seem to be forbidden, based on what we've said. However, there is an exception for squeezing juice onto a solid food.9 In this situation, the juice never attains an independent status as 'juice': you are merely transferring one food (lemon) to another food (fish), and it is not prohibited to take one food (the juice) out of another (the lemon).10

In order for this to be permitted, the juice needs to either improve the taste of the food, or become mostly absorbed into the food.11

This exception applies only if the juice is squeezed directly onto the food. It is not permitted to squeeze the juice into a container – even if this is done so that Melissa's guests may then pour it onto their fish. This is because when the juice is gathered in the container, it is considered a liquid, not a food. And, as we've said, removing juice from the fruit is generally prohibited as sechitah.12

The following activities cannot be done on Shabbat because they are considered sechitah (squeezing):

The following activities are permitted on Shabbat:

There are other issues related to sechitah of fruits that we have not covered here. For further study (there's always further study!), please see the works cited in the footnotes.

Stay tuned. There are two additional topics in Dosh, which we'll explore in our final lesson on this melacha.