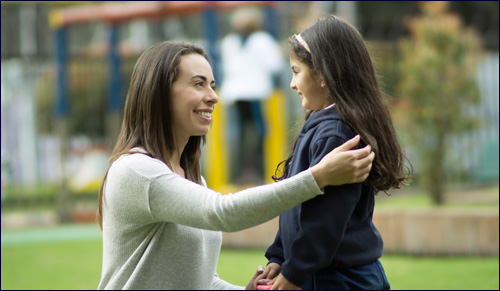 How to spark a discussion with your kids after school.

“How was school today?” In my house, that nightly question is usually met with a shrug and an indecipherable mumble. Here are eight better questions to ask your kids to spark discussion.

Did you ask a good question today?

This is the question that Dr. Isador Rabi’s mother used to ask him every day. Dr. Rabi, a world-renown physicist who won the 1944 Nobel Prize, recalled: “My mother made me a scientist without ever intending it. Every other Jewish mother in Brooklyn would ask her child after school: ‘So? Did you learn anything today?’ But not my mother. She always asked me a different question. ‘Izzy,’ she would say, ‘did you ask a good question today?’ That difference - asking good questions - made me become a scientist!”

Asking our children what their questions were signals that their curiosity is important and worth cultivating.

What was one thing that you learned today?

My son’s 4th grade teacher suggested this question, and it works. Describing a whole school day can be overwhelming. Providing one piece of information is less threatening.

What was one way you helped someone today?

This question empowers kids and can start them thinking of themselves as giving people.

If you were the teacher, what would you do?

This question can elicit a lot of excited suggestions. And once you get past the inevitable “Recess all day!” kids can confide some surprising ideas, giving you a window into how they see their school.

It also encourages kids to think of their teachers as real people, trying to do their best for the class.

How will you handle that next time?

Kids are often afraid of failure and don’t always know how to handle it. Asking about strategies for doing better next time helps empower kids to know it’s okay to fail and that what matters most is how they learn from their experiences.

If a giant polka-dotted monster crashed into your school, what period would you want him to visit?

Sometimes being silly is the best way to get our kids to open up and talk.

What’s one good thing that happened to you today?

Asking kids to recall positive experiences each day isn’t only a way to spark conversation, studies show it can improve mental health as well.

Dr. Robert A. Emmons of the University of California, Davis, and Dr. Michael E. McCullough of the University of Miami, asked volunteers to spend some time each week thinking and writing about events that had happened that week. Some volunteers were asked to focus on positive events; others spent time reviewing negative events, and a third group wrote about neutral topics. After ten weeks, the results were striking: those people who’d spent time each week reflecting on positive experiences were markedly more optimistic and described themselves as happier with their lives. They also exercised more and experienced fewer medical problems than those who spent time reflecting on negative or neutral experiences.

What did you do during gym / art / music today?

It can be tempting to focus more on our kids main academic subjects when discussing school, but asking about electives like art and music can spark great conversations and can even encourage them to be more creative and successful in school and in life.

Asking about art or gym class will hardly turn our kids into Nobel Prize winners, but it can send a powerful message that self-expression is important.

PODCAST: Getting Our House in Order

The Dangers of Criticism

Tales Out of School

Serve Warm
Scientific Curiosity and the Divine Encounter
Mind Over Milkshakes
Love the Convert
Comments
MOST POPULAR IN Family
Our privacy policy
Aish.com Is Looking for Great Writers