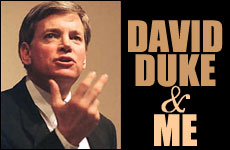 What do a Jewish mother of four and a Ku Klux Klan Grand Wizard have in common?

Every writer craves publicity, and I'm no exception. Good publicity can lead to more book sales, speaking engagements, and just plain nachas. But while some insist there is no such thing as bad publicity as long as they spell your name right, some publicity is harder to brag about than others. I mean, how does a Jew brag about being quoted by David Duke, former Grand Wizard of the Ku Klux Klan? Oy.

How does a Jew brag about being quoted by David Duke, former Grand Wizard of the Ku Klux Klan? Oy.

You could have blown me over with a fluffy matzo ball when I received a shocking email via a Google alert. The link in the email took me to a place I never imagined visiting: the official web site of David Duke, who named me as part of a devious cabal responsible for the "Jewish-supremacist domination of media, culture and politics." Apparently, this belief is always annoying for people whose wardrobes include white sheets and hoods, but is especially irksome in December, since it's now almost impossible to find any type of nativity scene in public – and it's all the Jews' fault!

The Klansman railed against me ("The Jewish writer Judy Gruen") because in an essay I had written about Chanukah, I celebrated the Maccabbee's efforts to fight assimilation, arguing that this was a timeless message. I could almost feel Duke's blonde hair stand on end when he posted these lines from my essay:

"In an open society, Jews need a reason to behave more like Maccabees and less like Greeks. That’s why the word Hanukkah means “dedication,” but its root word, chinuch, means “education.” When we are shown the beauty and value of our moral heritage, we will naturally work to preserve it, even at the cost of our lives."

He also quoted a few other Jewish writers who argued as I did: Jews shouldn't assimilate ourselves into extinction. But Duke was miffed, to put it mildly, that while overt religious symbols of Christmas were being challenged and even banished from public places, and schoolchildren forbidden from singing traditional Christmas songs, Chanukah symbols and music were everywhere! After all, a huge menorah was just lit in front of the White House by those Jewish supremacist Chabadniks!

But David, I didn't plant that giant menorah on the White House lawn. Honest! (Maybe Rahm Emanuel did it. Ask him.)

After giving it some thought, I realized that in his own nutty, Jew-hating way, Duke was giving me a grudging compliment. After all, we Jews aren't letting anyone take away our public menorah lightings from us unless they pry them from our latke-greased, sufganiot-stained fingers. We still joyously and unapologetically celebrate our 3,500-year history of Jewish identity and Jewish values, even if it makes us a bit out of step in today's "Dancing with the Stars" culture. Frankly, we are leaving David Duke and his buddies in the dust, which may cause a laundry problem for those white sheets.

And even someone as misguided as David Duke can't help but notice that while countless other civilizations that tried to kill us have come and gone, we are still here, still eating latkes and sufganiot, and more importantly, studying Torah and doing mitzvot. Duke may have learned this while studying for the Ph.D. in history he claims to have from a university in Kiev, Ukraine, where I've no doubt there is an endowed chair in Jewish Supremacist Studies. (By the way, Duke's latest book is called Jewish Supremacism, which he claims has been translated into 14 languages. Hmm, let me guess: Is Arabic one of them?)

Duke's latest book has been translated into 14 languages. Hmm, let me guess: Is Arabic one of them?

But he is wrong when he claims that Jews like me wield so much power over the media, culture and politics. Frankly, if I had any power over the media, I'd run my own magazine and give myself a large salary, with a company credit card. I'd outlaw reality TV shows, and exile Jon and Kate to an island in the Maldives, never to be heard from again. If I had any political power, I would solve part of the health care coverage crisis by forcing underdressed young women to go home and put on sweaters, instead of showing the whole world all their preexisting conditions. But has any of this happened? Is any of this likely? One would therefore have to conclude that my attempts at anything close to media and cultural domination have been unmitigated failures.

Besides, as much as I might enjoy cultural domination for a while, I doubt I would have the time, the energy or the organization skills to pull it off. Heck, I can't even manage to dominate the forces of paperwork from piling as high as Mount Kilimanjaro on my desk. When would I find time to orchestrate the removal of nativity scenes from public parks, force children to sing "Oh Chanukah, Oh Chanukah!" instead of "Silent Night" at school, light two-story tall menorahs at the White House, and otherwise "tear down the traditions of white people?" I just don't have that kind of free time. I still drive carpool.

So David, you give me credit for far more influence than I could ever dream of having. My real "power" comes from being lucky enough to be a member of The Tribe. And yes, we will continue to fight the good fight, to keep doing mitzvot and live proudly as Jews. That's why we're still here now, and will always be, long after your white sheets have become just an ugly footnote in history.

Pedro Martinez takes Stand; Refuses to Pitch on Yom Kippur
Don’t Believe in Other Gods Versus God is One
Seeing Without Eyes
Why Shouldn’t We Eat Whatever We Want?
Comments
MOST POPULAR IN Jewlarious
Our privacy policy
Aish.com Is Looking for Great Writers