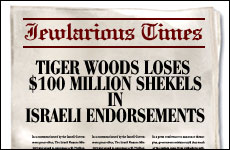 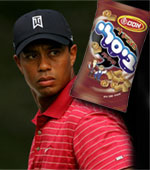 JEWLARIOUS SATIRE: Tiger Woods woke up to the shock of his life this past Tuesday. Popular Israeli snack foods Bisli and Bamba simultaneously announced that they were dropping him as their spokesperson. Bisli’s PR Director Shimon Maccabi told Jewlarious' wire service, “Since 1999, we have been paying Tiger Woods $37 million shekels per year to eat Bisli. We started to realize that Israelis golf as much as they figure skate and that our annual sales are only $20MM shekels anyway.” Maccabi paused and followed up, “Oh yes, I almost forgot. We also heard that he’s been getting some negative press lately.”

Woods said, “Et tu Bisli? The unkindest cut of all.”

Reeling after the loss of Gatorade and Accenture as sponsors, Woods needed his Israeli snack sponsors to stand by him during such a sensitive time. The loss of Bamba, Israel’s leading snack food with a whopping 25% of the market was so shocking to Woods that he conducted his first post-crisis interview with Arutz 2, “I am certainly astonished because during all that time that they sponsored me, I never really knew what Bamba was. It looks like a cheesedoodle, but how come it does not taste like cheese – it tastes like peanut butter and comes in a strawberry flavor too? Who makes a strawberry flavor non-cheese doodle anyway?” Woods teared up as he talked about Bisli, “So many shapes and flavors. Even without the sponsorship, I’ll still eat onion or falafel Bisli. I have to." Breaking down, he added, "Et tu Bisli? The unkindest cut of all.”

Meanwhile, Woods’ remaining major Israeli sponsor, Milki, has not announced its plans, telling Jewlarious: “We are a whip cream covered pudding and as such we take our spokespeople very seriously. We will let the media know when we have made a decision and it certainly won’t be through TMZ.com.”

Woods’ awful day did not end with the Bisli/Bamba double bogey. A “minor” sponsor, Meir’s dry-cleaning on Melech George also severed a ten year agreement to have Woods’ slacks pressed free of charge on any trips to Israel, which as of yet he has not made. Meir told Jewlarious, “I have been married to Ofra for twenty-six years and she is as beautiful as the day we met. Let Shimon’s drycleaners sponsor him.”

Fall - The Most Wonderful Time of the Year
Scientific Curiosity and the Divine Encounter
Mind Over Milkshakes
Love the Convert
Comments
MOST POPULAR IN Jewlarious
Our privacy policy
Aish.com Is Looking for Great Writers