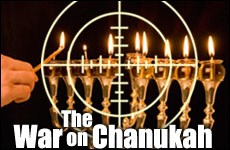 For more than 2,000 years, Jews around the world have been faithfully celebrating Chanukah, the annual festival of lights which commemorates the miracles performed for our ancestors during the great Hasmonean revolt against the Seleucid tyrant Antiochus Epiphanes.

It is a holiday rife with meaning for young and old, which in part explains its popularity among all sectors of Jewry, from the most estranged to the most observant. Who, after all, does not draw inspiration from the heroism of the Maccabees? Guided by divine providence, they restored our national and religious sovereignty, defeated the Syrian-Greek invaders and purified the Temple in Jerusalem.

What a stirring example of Jewish faith and fortitude!

And yet, in recent years, a deeply troubling phenomenon has taken root, as the festival and its underlying themes have come under attack. By defacing and distorting its meaning, a growing number of pundits have essentially declared war on Chanukah, seeking to hijack the holiday to advance their own personal or political agendas.

For the most part, the assault on this beloved holiday has largely been led by devotees of the left, who have sought to shear away Chanukah's historical, religious or even cultural content, and transform it into a vehicle for promoting entirely unrelated issues.

Take, for example, an article in last week's Philadelphia Inquirer, which proclaimed the advent of "Chanukah with a climate-change message," It quoted Arthur Waskow of the Shalom Center, who said regarding the holiday: "Can there be a more perfect occasion to focus on energy conservation and breaking our dependence on fossil fuel?" Somehow, I doubt that when Judah the Maccabee and his brothers made their valiant stand two millennia ago, they did so to promote awareness of global warming.

The fact of the matter is that the Maccabees fought to salvage Judaism, not to save the oceans or even the whales. To suggest otherwise is to misrepresent the holiday and its message.

Moreover, at a time when American Jewry is rapidly attenuating as a result of assimilation and intermarriage, it would hardly seem wise to dilute Jewish holidays of their Jewish content. If anything, ways need to be found to underline and reinforce their uniquely Jewish aspects.

Not everything in life is always so clear-cut, but the victory and miracles of Chanukah most assuredly are.

But it would be wrong to suggest that the onslaught against Chanukah is solely the province of the left, for even some political conservatives have decided to take up arms against the festival.

The latest to do so is David Brooks, the conservative New York Times columnist, who penned an article last Friday that was utterly offensive and displayed a keen misunderstanding of what Chanukah is all about. Referring to the Maccabees as a "bunch of angry, bearded religious guys," Brooks asserted that they were "best understood as moderate fanatics."

"The Maccabees," he acknowledged, "heroically preserved the Jewish faith. But there is no honest way to tell their story as a self-congratulatory morality tale."

"The lesson of Chanukah," Brooks insisted, "is that even the struggles that saved a people are dappled with tragic irony, complexity and unattractive choices."

Brooks could not possibly have gotten it more wrong. Indeed, his moral relativism and befuddled judgment is precisely the kind of thinking that the Maccabees were fighting against.

Matityahu and his sons went to war because everything that Judaism held sacred was in danger. They risked their lives for something larger than themselves, and every Jew alive today owes them a debt of gratitude as a result. Theirs was a black-and-white struggle, a straightforward encounter between good and evil, which ensured that the Jewish people did not go the way of other ancient nations and become extinct.

Sure, not everything in life is always so clear-cut, but the victory and miracles of Chanukah most assuredly are. And that is why it is so crucial that we stave off efforts by the Waskows and Brookses of the world to water down or submerge entirely the core elements of this special holiday.

Everybody, it seems, wants to reinterpret the Maccabees, rather than just accept them for what they were: national patriots and spiritual heroes.

It is those most basic of values -- fidelity to Jewish tradition, love of freedom and faith in the justness of our cause -- which embody Chanukah and which we must all strive to emulate.

So when I light the candles, I don't think about carbon footprints, hybrid cars or any other such causes, however worthwhile they might be.

Instead, I celebrate the great miracles performed for our ancestors, and hope very much for our own.

In Memory of Leiby Kletzky

Being British for 350 years
Don’t Believe in Other Gods Versus God is One
Seeing Without Eyes
Why Shouldn’t We Eat Whatever We Want?
Comments
MOST POPULAR IN Israel
Our privacy policy
Aish.com Is Looking for Great Writers