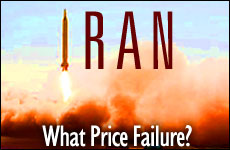 We must increase the penalty for defiance.

Among today's many foreign policy challenges, Iran's nuclear program may be the most daunting. An Iran capable of producing – and delivering – nuclear weapons would have major global consequences.

Think about it. Iran would wield enormous power in the most strategically vital and energy-rich part of the world. And its influence could extend far beyond, including in Latin America, where it has established close ties with Bolivia, Ecuador Nicaragua, and Venezuela.

Moreover, it could trigger a nuclear arms race in an already volatile region. Would Egypt, Saudi Arabia, and Turkey simply sit by while Iran achieves nuclear-weapons capability? Hardly.

Already, some neighboring states may be exploring their own nuclear options. These developments could spell the end of the Non-Proliferation Treaty.

Would Iran share its nuclear and missile technology with others? Very likely. North Korea and Pakistan certainly did.

What about the claim that Iran is misunderstood, slandered by bellicose adversaries who misled us into Iraq and now threaten to repeat their mischief? Does Iran only want civilian nuclear energy to prepare for a decline in its vast oil and gas reserves?

Intelligence from a variety of countries confirms that Iran's nuclear program reflects a clear desire to achieve, at the very least, breakout capacity, allowing it to weaponize in short order.

The price of failure is so high that we cannot afford any further delay, disunity, or self-delusion.

And Iran's missile program is on display for all to see. Iran sought to hide its enrichment facility near Qom, but it flaunts its military achievements. Why is Iran developing ballistic missiles with a range of 2,000 kilometers and ever greater accuracy? And why is it seeking to extend the range to 5,000 kilometers, putting all of Europe within reach?

Some say that Iran can be counted on to act rationally, even if it seeks power and prestige. It would never use weapons, they assert, that would invite a massive counter-attack. Wasn't the Cold War proof that nuclear weapons can create stability through mutual assured destruction?

Wrong on two counts. First, we cannot be certain that the current Iranian regime will act rationally. Driven by religious messianism, it might find martyrdom an alluring prospect. Second, countries derive power from merely possessing nuclear weapons, regardless of their possible use. Other nations would always have to account for Iran's nuclear capability in dealing with it, dramatically increasing Iran's political, economic, and military might.

So what should we do about this challenge? There is no easy answer. But what has not worked is abundantly clear.

From Germany's policy of "critical dialogue" to the European Union's six years of patient diplomacy, from President Bush's effort to isolate Iran to President Obama's extended hand, from Russia's soft negotiating touch to the UN Security Council's occasional slaps on the wrist, no policy has produced the desired result. To the contrary, all have bought valuable time for Iran and emboldened Tehran to believe it can have it both ways – remaining an integral part of the international community while flouting its will.

The focus must now be on increasing the price of defiance.

Europe remains Iran's top trading partner. That should end. China, India, and Russia should be persuaded to do the same rather than fill every void left by a departing European company. And why should Iran continue to benefit from importing refined energy products that strengthen the regime's grip on the country?

Iran's leaders may get the red carpet in Venezuela, but why do democracies like Brazil and Turkey offer warm embraces and business deals to Iran's UN-defying, human-rights-abusing, Holocaust-denying, vote-rigging president?

And the military option should remain on the table. That does not necessarily mean the use of force, but it may help convince Iran's leaders that continued defiance entails risks.

There is no guarantee of success. But the price of failure is so high that we can ill afford any further delay, disunity, or self-delusion in dealing with this pressing challenge.