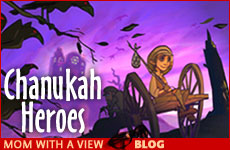 The courage to fight the goblins of our time.

My favorite Chanukah story is Hershel and the Hanukkah Goblins by Eric Kimmel.

Actually my favorite Chanukah story is the story of the battle and the miracles of the actual event. Nothing really beats the drama of a small band of Jews standing up against the Greeks and Syrians to fight for their beliefs. It’s a tale that deserves its own Rocky-style triumphant music in the background as we celebrate the victory of the weak over the strong, the few over the many and the faith in God over all. That’s the best story.

But for sheer whimsy and fun, nothing beats Mr. Kimmel’s tale of Hanukkah goblins, probably based on a Yiddish folk tale like all stories of its kind.

It’s a wonderfully imaginative tale of a people too intimidated by the menace of the goblins to light their menorahs and Hershel’s clever triumph and vanquishing of the threat. It’s a clever and subtle way of teaching about the courage to stand up for one’s convictions even in the face of intimidation, even when others aren’t.

And isn’t that the Chanukah story after all? That small band of Jews, those Maccabees, weren’t fight for their lives or their land. They were fighting for their very souls. All Jews praise those fearless Maccabees. All laud their heroic actions. But many have forgotten their battle cry, "Whoever is with God, follow me!”

This was a battle for the individual and collective soul of the Jewish people. The Greeks didn’t threaten our physical existence. They welcomed our participation in their lives and their culture -- as long as we renounced all ties to our faith. And some Jews did, even going so far as to have their circumcisions reversed, obliterating the mark of the covenant. It’s an old story -- assimilation and the desire to belong -- that has played out across the ages.

Only the few have had the courage to say no: No to intermarriage, no to assimilation, no to the constant and unfair attacks on Israel -- no to the “goblins” of our time. And even fewer have had the courage to say yes. Yes to constant and open-handed support of Israel. Yes to learning about our heritage. Yes to involvement in our traditions. Yes to a relationship with God.

Our heroes, the Maccabees, said yes loudly and clearly and were willing to pay with their lives. What do you say?

Yes to involvement in our traditions.

Do You Hate Being Alone with Yourself?

Is Your Marriage the Top Priority?

My Daughter Ate My Homework

Why I Love Getting Rid of the Garbage
The Promise Of The Land
Which Chat Are You On?: Parshas Behar/Lag Ba’Omer
Do You Like Slow-Cooked Food? Thank the Jews
Comments
MOST POPULAR IN Mom with a View
Our privacy policy