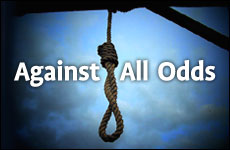 Leo Fettman's life and death wish during the Holocaust.

As a potential hero, Leo Fettman was an unlikely candidate. He was a pale,
skinny, erudite yeshiva student of 19 when the Nazis invaded his hometown of Nyiradony, Hungary in the spring of 1944. Hungary's leader Miklos Horthy, a longtime friend, had made public assurances to "his Jews" that they would always be safe, so the Fettmans were unprepared when, the day after Passover, Nazis stormed into their home, and ordered them to get ready to leave in ten minutes. Leo and his family -- his parents, grandmother and one brother -- were transported first to the local synagogue and then, two days later,
by wagon to the ghetto. Suddenly, the Nazis' malevolent intentions were becoming increasingly clear.

Leo didn't know what exactly he could do to help, but he waited for an opportunity. And one day, it came.

"We are looking for Hungarians to help us manage the Jewish prisoners,"
he heard a loudspeaker blare one day, right outside the ghetto walls where he stood. The sound quality of the loudspeaker was of such high caliber that it pierced the ghetto walls and reverberated in its streets. Most residents of the ghetto ignored the messages blasted outside on a continuous basis, but Leo took heed. This was the opening he awaited. He began to formulate his plan.

Even more difficult was the loneliness of being the only Jew amongst a rabid Jew-hating throng.

That night, Leo's father cut off his son's yellow star, and Leo crawled
underneath the ghetto fence. In the morning, he brazenly approached the commander of the ghetto, masquerading as a non-Jew. Possessing both fluent Hungarian and a Hungarian birth certificate given to him by a non-Jewish boyhood friend, Leo was able to pass the commander's cursory inspection. (The Nazis certainly didn't anticipate this type of audacity and derring-do to come from Jews). Leo was recruited into the Nazi organization, the "Arrow Cross," where he pretended to assist the Nazis in their mission. But what he was really doing -- as a "mole" inside the viper's nest -- was looking for opportunities to help his fellow Jews. Leo knew that the undercover role he maintained was fraught with danger, but even more difficult was the emotional vulnerability he felt, the loneliness of being the only Jew amongst a rabid Jew-hating throng. He felt irrevocably alone.

One morning, Leo happened to walk past a fellow solider, who was humming a tune as he worked. Leo stopped in his tracks, did a double take,
whirled around, and retraced his steps to where the solider stood. He listened
intently to the musical bars that pulsated in the air. Could it be?

He listened again. The melody was unmistakable, achingly familiar. He gathered his courage, and approached the young solider who, like him, was blonde-haired and blue-eyed, a perfect "Aryan specimen."

"Excuse me," Leo said quietly, "but isn't that melody that you're humming
Avinu Malkeinu?" (one of the most beloved prayers from the High Holidays liturgy).

The man looked around, saw that they were alone, and clasped Leo to him in a surge of joy. "A landsman!" (a fellow Jew!) he exclaimed jubilantly.

"What are you doing here?" Leo asked.

"Exactly the same thing that you are," the man twinkled.

Eventually, Leo discovered an additional 18 Jewish boys, who, just like him, had smuggled themselves into the Nazi den "outside," in order to help
their fellow Jews "inside " the ghetto walls.

The 19 boys joined forces and worked together to improve the lot of their brethren, in any way they could. Despite the risks they faced, they resolutely continued leading their "double life." Until the day came when they learned that the entire ghetto was to be liquidated, and an impromptu meeting of all 19 boys was hastily convened.

"I can't do it," Leo said. "I can't stay here, relatively safe, while my family is deported who-knows-where."

"Me neither," said a second. "My parents are old, they need me. I can help
them. I must help them.

"I agree," a third chimed in. "I wouldn't forgive myself if I didn't go with them."

All 19 boys felt the same way. One by one, they stole out of the soldiers' camp, crawled under the ghetto fence, dropped their Nazi uniforms in a pile, burned them, and returned to the ghetto apartments where their families lived. When the Nazis were summoned to the fire, they were livid, and rounded up all the ghetto residents in an attempt to find the culprits.

"Who is responsible for this?" the commander thundered at the 2,000 residents assembled in the ghetto square.

Save for Leo and his brother Sandor (who were plucked out for slave labor in Auschwitz), the entire Fettman family was sent to the gas chambers. When he learned his family's fate, Leo was so devastated that he tried to commit suicide
by climbing a tall tree and jumping off, but he surprisingly survived the fall with nary a scratch on his body. All that he accomplished was being sent -- without his brother -- to the punishment camp, as retaliation for his attempted suicide.

In this camp, Leo worked under both heinous conditions and brutal taskmasters. One day, when he didn't work fast enough for a Nazi's satisfaction, the soldier took a severed tree limb and hit Leo so hard with it that he broke Leo's leg. Leo was sent to the camp hospital where nothing was done to ease his pain other than wrapping up his leg. As he lay there in agony for several days, he was thinking:

The Nazis have no use for a man who can't work, he thought. What's the point? I might as well kill myself right now. They're going to gas me anyway, and maybe I can find a method a little less painful. And better that I take my own life than they take mine. This way I'm in control, not them, and it would be some kind of statement of defiance, wouldn't it?

Leo felt almost giddy with relief when he heard the death sentence pronounced over him.

But before Leo could find the means by which to execute his suicide a second time, he had to deal with someone else's: his hospital roommate, who had shared his sentiments. Knowing that Leo had already attempted suicide once before, the Nazis blamed him for inciting his roommate, and decreed that he would be hung in punishment. Leo felt almost giddy with relief when he heard the death sentence pronounced over him. Finally, it was over. Finally, the endless suffering would come to an end.

The next morning, Leo heard his number "37276" announced on the camp loudspeaker. Two SS men dragged him out of the infirmary towards a gallows
that waited for him. Hundreds of prisoners, assembled for role call, stood nearby. The Nazis wanted them to witness the hanging in order to teach them a lesson.

Leo was led up a short flight of steps and ordered to stand on a small stool.
A noose was tightened around his neck. He felt no fear. He was ready to die.
With nothing to lose now, he held nothing back in his last conversation with the SS officer who was charged with hanging him, a man prisoners had nicknamed
"Come Come" for all the times he chided prisoners moving too slowly with his customary reprimand, "Come, come."

"Do you know why you are being hanged?" Come Come taunted him.

"Do you have a last wish?" Come Come asked.

Leo felt completely calm. "Not a wish, but a statement. This is my statement: God is in heaven and God is looking down now and seeing what is happening and you won't get away with it. I have a question for you. Do you have a wife? And children? How about a dog? When you go home after murdering people here, how can you show love to your family? My family is human beings, compared to you."

It was strangely satisfying to Leo to see how angry Come Come was getting. When Leo asked him, "Am I not a human being, like you?" Come Come
screamed,

"No, you are not a human being. You are a worm!" With that response, Leo felt ready to meet his maker.

Come Come summoned a Jew by the name of Oscar to approach the gallows and kick the stool over, which would result in Leo's immediate death.

Oscar knew that he could lose his life, but he refused. He would not kill a fellow Jew. Come Come then directed another Jew to do the job, but he, too, refused.
By now, Come Come had reached a fevered pitch of fury. "I'll do it myself!" he
screamed, incensed. He kicked the stool with all his strength, and a second or two later…

The rope snapped and broke, leaving Leo lying on the ground, stunned,
but very much alive.

There had been many hangings in the camp, but as far as Leo knew,
this had never happened before.

"I knew at once that God had intervened on my behalf," Leo remembers 64 years later. "And that with His blessing, I would survive everything. The suicidal feelings that had been inside me for so long completely vanished, and I was suddenly filled with tremendous resolve to live. Death as an escape was no longer an option. Against all odds, I had survived both a suicide attempt and a hanging. God had clearly ordained that I should live, and right then and there, I told myself that I must live a life dedicated to Him and the fulfillment of His commandments."

A lifelong Cantor and Hebrew school teacher in Omaha, Nebraska,
Chazan Leo Fettman has served as an inspiring role model for the hundreds of Jewish students he has taught, and for the hundreds of non-Jewish students he has spoken to about the Holocaust. He did indeed fulfill the promise that he made to God on that fateful day at the gallows, a day he sees as his personal miracle, and not a small one, either.

Excerpted from "Small Miracles of the Holocaust: Extraordinary Coincidences of Faith, Hope and Survival" by Yitta Halberstam and Judith Leventhal, Globe Pequot Press. Click here to order
Like What You Read?  Give Jews around the world the chance to experience engaging Jewish wisdom with more articles and videos on Aish. It would make your mother so proud and as a nonprofit organization it's your support that keeps us going. Thanks a ton!

First Class Jew
Why Are The Prayers Of Yom Kipur So Repetetive?
Ha'azinu 5783: A Time for Unity!
Twisted Thinking
Comments