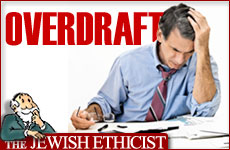 Borrowing beyond current means should be only for the most vital necessities.

Q. I notice many people living beyond their means, racking up credit card debt or overdrafts. Does Judaism have anything to say about this phenomenon?

A. The human tendency to live beyond our means is hardly a new one, and is discussed in many ancient Jewish sources. One of the most prominent is the following passage from Maimonides' Code. Maimonides begins with the prohibition to dun and harass a debtor when in any case he has no means to pay, but then in characteristic fashion he also discusses the opposite problem:

It is forbidden for the creditor to present himself before a debtor when he knows he has no way of paying. . . And just as it is forbidden to dun him, so it is forbidden for the debtor to withhold his fellow's money that was entrusted to him and to say, "Come back later", when in fact he has [the money]. . . It is likewise forbidden for a borrower to take a loan and to spend it unnecessarily, and to lose it until the creditor will not find any way to collect -- even if the lender is very wealthy. And any one who does so is called wicked, as it is written "the wicked borrow and don't pay." And the sages taught us, "Let your fellow's property be as dear to you as your own."1

Maimonides' main focus is on the interpersonal. A person who borrows to finance frivolous expenses ("to spend it unnecessarily") is likely to end up leaving the lender in the lurch. This was particularly abhorrent in previous times, when loans were almost solely interest-free and lenders were motivated solely by a desire to help the needy. However even today, when most lenders are motivated by a desire for gain, a person should take his monetary obligations seriously. Whenever you borrow you give your word that you will pay back, and a person should always stand by his word.

However, this same admonition also teaches us something about budget management. As the Prisha commentary points out, when Maimonides says "until the creditor will not find any way to collect," he doesn't mean that the person intends to evade payment. Rather, this is an inevitable risk of borrowing money for expenses beyond basic necessities.

But in the Jewish worldview, monetary matters are not just a matter of budget constraints; they are also matters of Divine providence. The Torah tells us that the land of Israel is "a land constantly under God your Lord's scrutiny; the eyes of God your Lord are on it at all times, from the beginning of the year until the end of the year" (Deuteronomy 11:12, Living Torah translation). As Rashi explains, God is always scrutinizing the needs of the inhabitants of the land of Israel, and beyond that the inhabitants of the whole world, assessing and providing for their needs.

Based on this, when God sees that we have extra needs, He may provide us with extra means. So great is our faith in this aspect of providence that our sages encourage us to rely on it. But the sages had a very particular concept of what our true needs are – one that doesn't correspond to the spending patterns of many heavy borrowers:

Rabbi Yochanan said in the name of Rebbe Eliezer the son of Rebbe Shimon: The Holy One, blessed be He said to Israel: "My sons, borrow on my account and sanctify the [Sabbath] day; trust Me and I will pay. . . .All of a person's sustenance is budgeted from Rosh HaShana to Rosh HaShana, except for expenses for Sabbath and holidays and expenses for Torah education for his children. In this case, if he scrimps his budget is cut, and if he adds his budget is increased.

Having bread, wine and a bit of meat for holy days (not weekdays) and providing adequate Torah education for children are not luxuries; they are necessities. Therefore, a person is allowed to borrow for these outlays. Of course even in this case a person may not borrow recklessly, but there is definitely a belief in providence that allows us to extend ourselves in these cases a little more than we normally would. But we can just as easily see from this that for non-essential expenses, if we don't have enough money for them now and we can't see how we will obtain enough soon, that is evidently an indication that they are not part of our providential budget for this year.

The Kids Are Alright

The Jewish Ethicist - Almost Poor
The Blue Beyond
Great Place to Live
Is Eating Supposed To Be Spiritual?
Comments
MOST POPULAR IN Current Issues
Our privacy policy