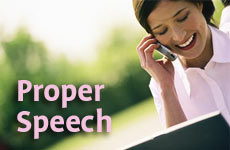 Controlling one of humankind's most powerful tools.

What is mankind's unique advantage over the animal kingdom? Man is certainly not the fastest or strongest creature. Recent studies of dolphins and other animals suggest than man may not even be the most intelligent of creatures. Yet man possesses something that no other creature in the universe has – the ability to creatively communicate. While other animals can communicate as a survival mechanism, none but mankind can express a philosophical query.

The Torah says that when God blew a soul into Adam, he became a "speaking being."1 The driving force of humanity is verbal interaction. Thus why the Torah contains so many mitzvot that are communication-oriented.2

"Sticks and stones can break my bones but words can never hurt me." This statement is completely antithetical to Torah. Verbal abuse can cause great pain and anguish. Words like "you're worthless" wipes out a person's self-esteem, destroying ambitions and dreams. If a child in a Little League game mocks another player who struck out, the outcome of the game will soon be forgotten, but the victim of the comment may be scarred for life.

We have all seen the power of gossip to tear apart relationships, families, and even entire communities. Negative speech is the most lethal weapon known to man – it can kill many people, even at great distance.4

On the other hand, words can be used for tremendous good: cheering up someone who is having a hard day; bolstering someone's self-esteem; instilling a sick person with a sense of hope. Never underestimate the power of words to make a difference in someone's life. As King Solomon said, "Life and death are in the hands of the tongue."5

Click the play button on the above to listen to a 3-minute audio lesson: "Hurtful Words" by Rabbi Zelig Pliskin.

Loshon Hara is the Torah prohibition of derogatory speech, as it says, "You shall not go about as a talebearer among your people."6 Loshon Hara is forbidden even if it is true.7 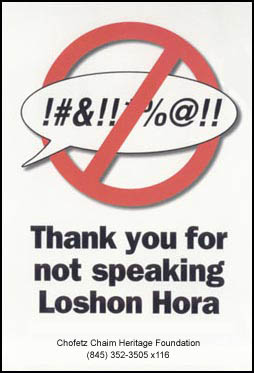 One must be extremely careful about these matters in standard business scenarios. For example, if your client asks you about the services that another company is offering, you must control your tongue from disparaging the competition. (For details, see Financial Laws Part One, section on Competition.)

Loshon Hara is also prohibited even when:

In certain situations, it is permitted, and indeed obligatory, to reveal negative information about someone. The general rule is that you can say something negative in order to prevent someone from future damage. For example: 13

But before you go ahead and use this exemption, make sure the following conditions apply:14

Since the details of these laws are quite complex, a rabbi should be consulted before divulging negative information.

It is forbidden to listen to Loshon Hara.16 Therefore one should try to avoid people who gossip. One should be aware of potential Loshon Hara situations and stop them before they start. For instance, reunions are particularly rife with gossip: "Oh, did you hear about so-and-so..."

If you do hear Loshon Hara, it is forbidden to believe that it's true. You can be suspicious and check it out, but may not accept it as fact.17

For example, if someone says that Mike is a thief, you are not allowed to believe it (unless you have proof). But if you are truly suspicious, you are certainly entitled to not have him stay in your house. That is because you are allowed to protect yourself on a suspicion, even if you do not know the real facts.

Some people put anti-Loshon Hara signs over their telephones to remind them to guard their tongues.

One way to stop speaking Loshon Hara is to recognize one's own faults and commit to improving on them. When we accept that we alone are responsible for our inadequacies, then we will similarly be less critical and more tolerant of others.

The best way to develop proper speech patterns is to study the laws of speech on a regular basis. There are a number of excellent English works that can be used for this purpose.18 Such study is even more effective when done with a partner.

It is forbidden to engage in promiscuous talk.19 This is not dignified behavior, and can lead to immoral thoughts and behavior. If a co-worker consistently makes jokes that are in poor taste, you should ask him to please refrain from such humor in your presence. Don't be concerned that you will be mocked. You are much more likely to gain respect for having strong convictions.

In general, of course, there is no prohibition of saying good things about people. However, one must be careful about either "over-praising" someone, or praising them in the presence of someone who doesn't like them. In such a case, the listening party might respond with a comment like, "Oh, he or she is not that great!" In other words, the initial praise would trigger the other person to speak Loshon Hara, and thus should be avoided.

The Talmud says that "the seal of God is truth."20 If one word would sum up what the Torah stands for, it would be "truth." On one level, this is because the eternal values of Torah dispel all the shams and falsehoods of the pagan world.

And of course, Torah enjoins us to keep a distance from falsehood.21 This means not merely refrain from speaking lies, but also to desist from conveying any message of falsehood.22 Communicating the truth is required even at the cost of one's money or pride.

A statement that is technically true but leaves the listener with a faulty impression is forbidden.23 On the other hand, a pronouncement that is imprecise but still conveys an accurate message is acceptable. For example, if someone is waiting and you say, "I'll be there in a second," it is understood that it will take more than one second to get there, and such a statement is permitted.24

Sometimes, expressing a technical untruth may actually relay a deeper message of truth. For example, say your wife asks how you like the new dress she bought. It's not returnable and you really don't care for it. If you tell her what you really think, she will be upset. Sometimes when someone asks how they look, they are really just looking for validation. Be sensitive to what others are really asking for, and say the right thing.25

The Talmud instructs us to tell a groom that the bride is beautiful, even if you don't really think so.26 This is permitted, because in the eyes of the groom, the bride truly is gorgeous. The same applies to a person's purchases or anything else that is subjective. You might as well make a person feel good about what they have.27

Another example is if a mother of particular bratty child asks if her child is cute. You are permitted to say "yes," for in the mother's eyes, he is!28

The Torah tells us: When Sarah was told that she would have a baby in her old age, she expressed surprise that her husband Abraham was capable. When God later related the story to Abraham, he changed one detail, saying that Sarah doubted her own capability.29

We see from here that for the sake of peace, it is occasionally permitted to distort the truth.30 If an insensitive comment was made about someone, the statement may be told over differently than it was originally said.31

The Talmud32says that Aaron, Moses' brother and the first High Priest, was a great peacemaker. If two people had an argument and were not on speaking terms, Aaron would go to one of them and say, "Your friend really feels bad about this and wants to apologize." Aaron would then go to the other person and say the same thing. Eventually the two would greet each other and embrace over the renewed friendship.33 In this way, even though what Aaron said was not technically true, he was able to make peace.

From the Torah's perspective, eliminating discord and perpetuating peace is upholding the ultimate truth.

There are a few other situations in which it is permitted to say an untruth. If someone asks you about something that is none of their business, you need not be straightforward in your response. For example, if a panhandler asks you if you've got ten dollars, and you estimate that he is not an ideal recipient of charity, you can say "No." You are not obligated to say "Yes, but I don't want to give you." He is not entitled to know what is in your wallet.34

However, even in a case where it is permitted to misrepresent something, one should try to avoid doing so, or at least minimize the falsehood.35 Otherwise, one could get into the habit of lying. One should certainly not do so on a regular basis.36 Moreover, it is never permitted to misrepresent information in the presence of children, as they cannot discriminate between different situations.37

The Sages tell us that the First Temple was destroyed due to the severe transgressions of idolatry, murder, and immorality.38 An exile of 70 years sufficed to purge the nation of these terrible crimes. The Second Temple was destroyed due to hatred between people, specifically manifest as Loshon Hara (negative speech).39 This crime is so serious that even 2,000 years of exile has not managed to purge it. Negative speech is keeping the Jewish people in exile, subject to foreign domination and anti-Semitism.

The Chafetz Chaim40 presents evidence that if the Jewish people would perfect the proper use of speech, the redemption would occur. May we always help others, and draw people closer to one another, and in that merit may we see the redemption, speedily in our days. 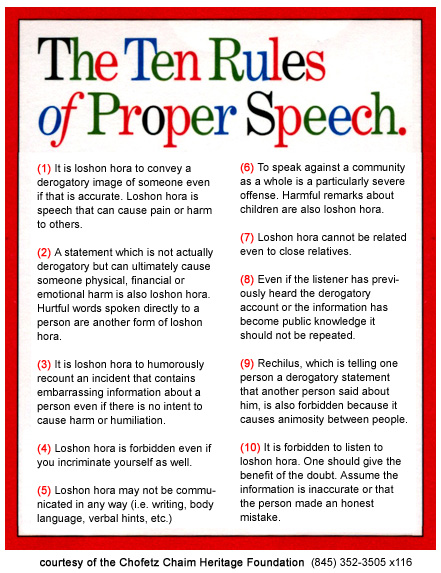 Judaism and the Treatment of Animals

The Shulchan Aruch: How a 500 Year Old Book Shaped Jewish Practice
Jews and the Chocolate Trade
Cats: 8 Jewish Facts
Every Night, Forgive Yourself and Others
Comments
MOST POPULAR IN Jewish Law
Our privacy policy
Aish.com Is Looking for Great Writers