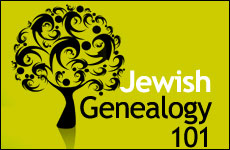 Some surprising discoveries in my family tree research.

In 1998 my family acquired its first computer. After learning how to email, my main interest was researching genealogy.

Like many American Jews, my family arrived in the United States from various points east in the early years of the 20th century. In those days, it seemed, few immigrants discussed the families they had left behind. Connections often disappeared as the immigrants aged and passed on. Their children and grandchildren often had little knowledge of the aunts and uncles, brothers and sisters and other family members from the Old Country.

This was certainly true of my family. Much of our family history is still waiting to be uncovered. I kick myself when I think of how much easier it would have been to unlock those secrets if only I had started searching years ago by asking my grandparents and other aunts and uncles some basic questions. Now these people are no longer with us, and my search must go by a more circuitous route.

The World of Jewish Genealogy

When I started to explore Jewish genealogy, the first step was learning to navigate the www.jewishgen.org site. JewishGen is a massive research tool for people doing Jewish genealogy research, with thousands of translated records, databases, special interest groups, on-line classes, discussion groups is available at the click of the mouse. One of JewishGen’s most interesting tools is a Family Finder, whereby a researcher can enter the names that he is looking for to see who else might be searching for that same name.

My first step was to enter the names of my grandparents, noting as much information as I had. Three of my grandparents were from Eastern Europe, common for most American Jews. My maternal grandfather however was originally from England. I didn't know much, other than the fact that that family name had originally been "Isaacs" and rumor had it that we were somehow related to Sir Rufus Isaacs, the 1st Marquees of Reading, who attained the highest rank in the Peerage reached by a Jew in British history.

Through the years I continued to dabble in the search, even attending the JewishGen's yearly conference when it was held in Jerusalem.

Last summer I received an email from Geoff, a researcher living in New Zealand. He wrote that he had recently discovered (at age 63!) that he had been adopted. He was researching his biological family and came across my name as a fellow Isaacs-researcher. I didn't pay much attention since I'd received such emails before through JewishGen's Family Finder, and nothing had ever come of them. But this time, we struck gold. As research progressed in England through old records and documents, we were able to determine that Geoff and my mother shared a common great-grandfather.

Geoff had grown up with little knowledge of Judaism, but he was fascinated.

By wintertime, the emails were flying fast and furious. Geoff had discovered another cousin in England, and I was introducing him, through cyberspace, to my family -- dozens of cousins around the world who were as thrilled as I was to meet our long-lost relative.

Geoff had grown up with little knowledge of Judaism, but he was fascinated. He began to read voraciously about Judaism and Israel. When I mentioned to him that my son would be getting married in August, he immediately made plans to attend, allowing us to reconnect with a branch of the family which had broken off over a hundred years ago.

Geoff and his wife Jenny arrived in Israel the day before my son's wedding, and they were met at the airport by another cousin. The two couples drove up North to the wedding, and when we parted ways a few days later after a shared Shabbat with other family members, I was finding it hard to believe that we hadn't known each other all our lives.

Knowing where we came from is a powerful part of what makes us who we are. Not only is Geoff reconnecting with his Jewish roots, but his research, which now dates back to the early 1800s, indicates to our family that we may well be descended from Dutch Jews who made their way to England in the 1600s after fleeing the Inquisition. I’ve always read about the horrible period of the Inquisition and the Jews who were caught in its clutches, but now I have a strong indication that this is my personal family's story as well. It is a potent connection for our family to our people's history.

I am also awed at what a strong link we, otherwise perfect strangers, now feel to our newfound family. Although we our tie was created only because we share great-grandparents, we have forged a lasting bond which I believe will carry us for many generations into our family's future.

Perhaps that's the importance of genealogy research -- learning our own personal histories goes hand-in-hand with Jewish history. As we build our Jewish futures and those of our families, our past continues to guide and strengthen us.

There are many guides to novice researchers, but the most helpful information in beginning my research was on the www.jewishgen.org site. It is staffed by volunteers who have set up an extremely comprehensive beginners program to help researchers get started in their searches. Their listserves allow people to write in questions, and other researchers are always around to help.

Of utmost importance is collecting as much oral history from elderly relatives as possible. Even little tidbits of memory that our grandparents, aunts and uncles and cousins can provide not only assists the research itself immensely, but also helps the family history come alive, allowing us to connect with the narratives and legends of our ancestors so that their stories become our own.

The Secret Jew & Incredible Survival of his Lost Manuscript

Flames of Hope: The Power of Hanukkah