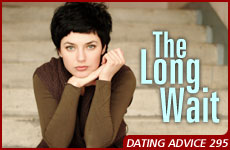 Surviving the phenomenon of “we want to get married, but not now.”

I am a 22-year-old Jewish woman in my senior year at university. A year ago I met a great guy and we have been dating steadily ever since. (He is 23 and has already graduated.) Originally, we did not start off dating for marriage, but as the months passed and our courtship has deepened, we now discuss marriage openly and regularly (he was the first one to bring it up.)

We both get along well with each others’ families, but the problem is that neither of our parents support us getting married in the near future -- until we are at least in our mid-to-late 20s, as our parents were when they got married.

At the moment, we're dating over a long distance, although after I graduate we intend to move to the same city. In the meantime it is quite frustrating that we can’t spend more time together and I’m afraid it’s going to turn things stale.

My question is: When should we get married or engaged? I’m not quite ready to take on that huge, lifelong commitment of the awesome role of "wife," as well as planning a wedding and dealing with unsupportive family members who think I am too young to get married. Nonetheless we are devoted to each other and would very much like to get married, just not right now.

When is the "right time" to get married? And for the immediate future, what do you think is a good "next step"?

This is a common dilemma that young couples face when they start dating before they feel ready for marriage. They may be college students, or just launching into a world of adult jobs and responsibilities, or even older teens who started to date in high school. When they realize this is serious enough to imagine spending the rest of their lives together, they want to move to a deeper level -- and this creates a tremendous amount of pressure. It seems that marriage should be the next step, but they wonder how they can get married if they still have to finish college, or have just landed their first job and have no money to start a life with, or have no idea what they want to do with their life, or aren't ready for adult responsibilities, or feel the need to accomplish a particular goal before making such a commitment, or are encountering strong parental opposition to the idea.

This is indeed a predicament. When two people feel right for each other and see themselves building a future together, it's very difficult to put that future on hold. They want to take the other person into consideration when planning certain aspects of their lives, but there aren't strong enough ties for them to expect the other person to do the same. They want to share more life experiences, but they're separated by distance or time. And for those who recognize the importance of delaying physical intimacy until marriage, there is an additional source of pressure.

Western culture sees dating as a form of social interaction.

The only sure-fire way to avoid this predicament is… to not start dating until you’re ready for marriage. Of course, the trend in society is not to follow this practice (and in your case it is already after the fact). Western culture sees dating as a form of social interaction that begins in adolescence, and many people don't even consider dating as a way to meet their future spouse for a decade or two… if at all. Contemporary culture considers marriage as one of several acceptable lifestyle choices, and may even discourage young marriages because they believe that it stands in the way of a person's ability to grow, self-actualize and achieve fulfillment.

This is not the Jewish view. Judaism views marriage as one of life’s most important goals, as the very path to self-fulfillment. Marriage can enhance one’s ability to obtain an education, establish economic security, advance in a career, and achieve one’s potential.

But what about the situation you now face?

We don't have an easy solution, but we can offer a few suggestions that have worked for others. The first is to use the current geographic distance between you as an advantage. The fact that you can't see each other so often can slow down the momentum of your courtship, and in your case this is a good thing. Don't confuse your strong wish to see each other, with the need to move your connection to a higher level. When you're able to be together, cherish the opportunity and focus on the moment.

Our second suggestion is to give yourselves some sort of time frame to help feel that you are making progress toward the goal of marriage. Otherwise, the frustration that inevitably comes when two people need to and want to deepen their relationship, but can't, can eat away at the foundation of that relationship. That's why we don't believe it's a good idea for you to wait the number of years your parents seem to want you to wait. Instead, we encourage you to work toward being ready to marry in a much shorter time frame that you can all be comfortable with.

In order to figure out what that time frame should be, you’ll need to clarify your goals and expectations for the future. A few months before you are due to graduate, you should each separately give some thought as to where you, as individuals, see yourselves in the next six months, one year and five years. Think in terms of all aspects: education, career, religious growth, economic situation, lifestyle, social and family life. Are your current stated goals what you really want, or what someone else wants for you? How do you see yourself getting there?

Also, think about what exactly you feel you must achieve or grow into before you are ready for marriage. What is stopping you from pursuing this goal right now? Can you make a plan to accelerate the process? What will happen if you decide to get married before you've achieved this goal -- can you complete it while you are married?

Your parents are more likely to support a mature decision.

When each of you has a clear idea of your goals and expectations, get together to discuss them. See how well your individual aspirations fit together, and talk about different ways you can compromise your differences. Give yourselves reasonable timetables for any of the goals you feel you must meet before marriage. Then, sit down with each set of parents to discuss your desire to marry and explain how you've carefully thought through a strategy to enable you to marry in the foreseeable future. Even though your parents may have their own ideas, they're more likely to support your decision when they see the mature and forward-looking way that you are implementing it.

Our general rule is that when two people feel they are right for each other, they should embark upon their life together as soon as is practically possible. When two people know where this is headed, they need to deepen the relationship and make a commitment to each other. If they delay doing so for too long, the bond between them is likely to erode. That’s why we encourage you to work together toward meeting your pre-marriage goals so that you can become engaged within a reasonable period of time.

We also encourage you not to stretch the engagement period for a year or more, as some couples do. You'd be surprised how many couples are able to plan a wedding and select and furnish a place to live in a matter of a few months. Many aspects of engagement are wonderful, but others can be stressful, and we've seen that shorter engagements tend to be less stressful.

We hope that our suggestions help you resolve your dilemma,