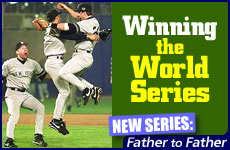 Teaching our children the true meaning of “victory.”

Seeing the Yankees celebrate winning the 2009 World Series, pouring champagne all over each other, coaches and teammates jumping up and down, A-Rod, Derek Jeter and Joe Girardi in a wild group embrace, it made me wonder: What is the meaning of “winning”? What is exactly the real purpose of “winning” that people labor so hard and risk so much for it?

To be sure, the desire to "win" would seem to come naturally and early in life. Who as a young child (adults, too) hasn't craved to be the "winner" -- to win a prize, a game or even modest recognition? I remember as a young boy not just wanting to win, but needing to win. And I used to pray for the Yankees to win. I implored God to arrange for a fly ball to drop here or there, or to give Thurman Munson the strength to smack the ball into the stands for a home run.

Watching the Yankees play this year reminded me of all that again. These grown men in pinstripes remind me of the small boys you see in Little League who play to win as if their lives depend on it. Other children compete for who is most popular, as though this distinction were a ticket to immortality. We all know of young people who torture themselves or their bodies in order to be liked or admired.

As I was caught up in the pageantry and ersatz gravity of the World Series, it hit me: the concept of “winning” is probably not a "Jewish" thing. Curiously, the modern Hebrew word nitzachon does not appear in the Bible. As a matter of fact, in traditional Jewish life there seems to be no category for “champion” or “number one.” It is far too egotistical. In Western society, when you win in sports, you have “proved” that you are the best. The Talmud on the other hand, famously encourages moderate competition -- only in Torah study -- but warns that he who learns for the sake of triumphing over others receives no reward.

Rather, the Jewish emphasis is on hatzlacha – success. It’s a word you find many times in the Torah, as in the description of Joseph as an Ish Matzliach, a successful man.

So if “winning” is not the Jewish concept of success, then what is?

The measure of success is in the effort, not the result.

In Judaism, the measure of success is in the effort, not the result. The old saying, "It's not whether you win or lose, it's how you play the game" is a value that young people are not instilled with anymore. How tragic. Instead of everyone having the potential to "win" by trying hard, 99 percent are branded as "losers."

In today’s hyper-competitive world, even the “winner” often gets a false sense of achievement. One child with superior natural abilities -- who doesn’t have to try hard -- may win easily and get all the glory. But deep inside, he knows that he has sold himself short by not putting forth the best effort.

So what do we as fathers do to encourage a full effort? Here’s how: Get involved, hands-on. Take your sons and daughters to the ball field and the swimming pool. Observe them. Don’t be afraid to let them struggle a bit. The key is to instruct little -- teach them to hold the bat or to get the ball in the basket -- and then watch them struggle until they master it. Open up the textbook with them. Help them "swim" in their studies.

Your child cannot always be “number one,” but when he succeeds, he ends up winning, too. And that’s something to truly celebrate.

How to Help Kids Learn when Hebrew School’s Cancelled

PODCAST: Talking to Our Children about God

My Father, the Hassid
The 21st President of the United States: Failure or Inspiration?
Hiding Their Jewishness
The Jewish Pope: Following the Questions Home
Comments