One father. 100 children. 20 years. A story of epic proportions.

When World War II broke out in all its fury, European Jews scrambled for safety, desperately seeking a haven from the madness that was Adolf Hitler. But in the midst of this struggle for survival, Reb Yona Tiefenbrunner abandoned his chances for refuge to save hundreds of Jewish orphans from the Nazi murder machine.

In 1942, the Jewish Orphanage of Brussels was created by Belgium’s Nazi Occupational Government as a temporary front to their diabolical plans of Jewish liquidation, and Yona Tiefenbrunner, a young man not yet 30 years old, agreed to head the precarious orphanage. Overnight, he became a father to hundreds of traumatized and tortured orphans.

Yona went straight into the Gestapo Headquarters, demanding the release of a child, knowing they could shoot him on the spot.

The children referred to him simply as “Monsieur,” but they knew he would risk his life to save them. Time and again, they witnessed Yona manifesting unimaginable reserves of self sacrifice and heroism, leaving no stone unturned when it came to trying to save even one person.

Herbert Kessler recalls this story of how Yona went straight into the Gestapo Headquarters, demanding the release of a child, with the dire knowledge that that they could easily shoot him on the spot for his insolence.

Once, on Shabbos morning during services, Mr. Tiefenbrunner approached me and said, ‘Herbert, take off your Talit and come with me’. We left the house, heading straight to the tram. I was astounded: Traveling on Shabbos?! Confused, I asked Mr. Tiefenbrunner what happened. How did it come to be that he was traveling on Shabbos? On the way, he told me that he had just learned that the Gestapo Headquarters was holding a boy they were ready to free. There was no time to lose because they could change their minds at any moment.

"I want to try to get this boy out of there. I will tell them I’m not leaving without the boy. But I want you to come with me so that if something happens to me, you will report back to the home, informing them that I won't be coming back," Yona told me, handing me his gold watch. When we reached the Gestapo Headquarters at Avenue Louise, he told me to wait at the street corner, from where the entrance of the Gestapo headquarters was clearly visible.

"Keep checking to see if they take us away in a car. Wait exactly half an hour. If I don't come back with the child, return as quickly as you can to the Home and tell them to disperse all the children within two hours. Maybe I will return later, so somebody should stay and watch the house. Send the children to play in the Square Margueritte, but don't tell them anything. Should I not come back, advise Blum (a senior staff member in the home) that I have been arrested and that everyone should run and hide as they will come after everyone in the home as well!"

He entered the Gestapo and I was waiting at the corner with his watch in my hand, my eyes peeled on the Gestapo entrance. I waited and waited...I don't think that in my life I have ever experienced such a long half hour!

At the last minute he came out with the child, white like a sheet. He shook my hand and we returned to the Home. The morning prayers were over, and he didn't mention a word about what had happened. But the next Friday night, when it was my turn to receive his weekly blessing, his hand rested a little longer on my head, and he shook my hand with more strength as usual as he greeted me with 'Gut Shabbos.'

Despite the ever-present danger of deportation and the watchful eyes of the Gestapo, Yona managed to infuse his orphanage with Torah, love, and tranquility. There were myriads of Bar Mitzvahs Yona hosted for his boys, and there was Shabbos, Yom Tov, and just plain kids fun too.

When the war was finally over and others tried to put the past behind them, Reb Yona and his wife, despite having their own young family of three daughters, made a life choice in a heart beat that few of us would ever contemplate, much less embrace. Yona, aided by his wife Ruth, continued to nurture the orphaned children as his own, rebuilding their shattered spirits and giving them a chance at life.

For 20 more years, Yona valiantly stayed at his post, as father to his orphans, until the last child had grown and married. Tragically, Yona Tiefenbrunner, the self-effacing gem of infinite compassion and self sacrifice, lived only a brief 48 years, passing away unheralded, shortly after his orphanage closed in 1960. He left his own three biological daughters, not yet married, orphaned.

Let this hero’s story be told

Today, Yona’s 'children' live all over the world, with children and grandchildren of their own. But the passing of years hasn’t diminished the deep love and gratitude that they feel to their “Monsieur.” In August 2002, on the occasion of Yona’s 40th yahrtzeit, the orphans met in a Jerusalem banquet hall to remember their beloved “Monsieur.” In an emotional testimony from one of Reb Yona’s 'children, Moniek Kerber spoke for them all. “He gave us the will to continue with our lives. He restored the human spirit within each of us after the desolation of the Holocaust. We are all a living monument to his blessed memory.” And indeed, they are.

In May 2007, tipped off by a friend who told me there was a legendary story of heroism in his family, waiting to be told, I flew to Israel, finding myself face to face with Yona’s three daughters, now grandmothers.

The three sisters showed me album after album, with aging black-and-white photos showing groups of smiling children -- boys, girls, toddlers thru teens, along with their father Yona. They handed me a an alphabetized listing with over 100 names, complete with addresses and phone numbers of former children of their father’s orphanage.

And thus paper trail in hand, I pieced together their story. From around the globe -- from Boston to Arizona, from Antwerp to London and throughout Israel, the tales began pouring forth. Everyone shared their excitement that the story of their hero would at last be told. And yet each shared individualized details of how “Monsieur” had made a profoundly personal difference, given his or her uniquely tragic circumstances, empowering each to build their own Jewish homes and perpetuate the respective legacies of their martyred parents.

Sarah from Monsey, today the matriarch of a prominent family, credits Yona not only for saving her life, but for her and her lovely family’s Judaism.

She’d arrived at Yona’s home in 1943, a petrified little girl, eyes bulging with fear. Her parents, who lived in Antwerp, had hidden her with their gentile housekeeper in return for payment. When her parents were deported, the payment stopped coming and the gentile woman no longer wanted to care for her. Grabbing her by the hand, she briskly led Sarah out of her house one day, taking her to a nondescript house. She knocked firmly, and when the door opened, asked to see the director immediately. “See this child?” she demanded of Yona Tiefenbrunner, “she’s Jewish! Either you take her off my hands now, or I will drop her off at the Gestapo!”

Yona did take her in, weaving her into his happy family and miraculous island of refuge, faithfully and lovingly raising her as a true Jewish daughter, until he walked her down the chuppah over a decade later. “We were very happy children!” Sarah recounted. “Only after we had grown up and moved on into real life did we sense that we were orphans — that we had no other family.” 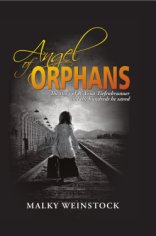 Based on the recently published book, Angel of Orphans, published by Targum Press. Click here to order.

Malky Weinstock is the author of Angel of Orphans, published by Targum Press.

Who Will Save the Baby?
Adam and Eve Were Vegan
Bechukotai 5782: Divine Retribution
Behar 5782: Working to Live or Living to Work?
Comments
MOST POPULAR IN People
Our privacy policy