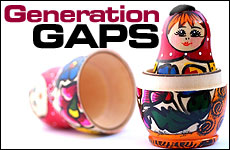 I didn't expect that my kids' knowledge about all things Jewish would outstrip mine by the time they were in the third grade.

Lately I've been channeling my long-departed Nana and Papa for a little coping advice. You see, even though I'm a second-generation American and they were European immigrants, in a funny way I'm just as much a "greenhorn" as they were. Whodathunkit?

I remember how bewildering modern American culture was to my Yiddish-speaking grandparents. The ever-hiking hemlines, rock and roll music, and social upheaval in what was promised as a goldena medina provoked an awful lot of oy vey iz mirs from them as I grew up. They were grappling with a generation gap and a culture gap as vast as the ocean that separated the "old country" from the new, a place that scared them in a way even Poland never did.

I noticed a book on their shelf called "All for the Boss." My immediate thought was: Bruce Springsteen?

Now I've got a culture gap with my own kids – in reverse! I'm a baalas teshuva (BT) mom who slowly became religious in my 20s, and realized instantly that I had a lot to learn. The first time I went to the house of a "really religious" Jewish couple, I noticed a book on their shelf called "All for the Boss." My immediate thought was: Bruce Springsteen? When I pulled the book off the shelf and saw it was about the remarkable life of an Eastern European Jewish survivor of the Nazis, I felt a little sheepish.

Learning the Alef-Bet of Yiddishkeit as a young adult, I looked forward to having children who would recite their blessings in Hebrew fluently, as I followed at my own, BT pace. I envisioned kids enthusiastically sharing their insights about the weekly Torah parasha at the Shabbat table, and shepping nachasfrom their efforts. I couldn't wait to have kids who would know so much more than I did, Jewishly speaking.

But as the famous saying goes, be careful what you ask for: You might get it!

Don't misunderstand: I shep boatloads of nachas from our four "frum-from birth" kids, but I didn't expect that their knowledge about all things Jewish would outstrip mine by the time they were in the third grade. If you feel bad that you can't answer questions posed on the television show, "Are You Smarter Than a Fifth-Grader?" imagine how you'd feel if you couldn't even compete with a show called "Are You Smarter Than a Kid in Kitah Bet (second grade)?"

This reality hit me harder than a stale bagel not long ago. One of our sons had brought home a book, a gift from a teacher. As he tore off the wrapping paper and opened the book, he read the teacher's inscribed note inside, which was in Hebrew.

"What's it say?" I asked, not liking to have to ask for a simple translation from a kid to whom I had read "Goodnight Moon" at least 300 times.

However, my greenhorn status had been sealed a long time ago, when my older kids started becoming teenagers and the boys in particular became shtark (serious) purveyors of parasha insights and mavens of the morning minyan. They love wrangling over Rashis and over the finer points of Jewish law. They pitch Talmudic terms around like baseballs, though even they would admit that their batting average in answering Talmud questions tops their personal bests from their days in Little League. Sometimes during a single conversation they are having I hear so many Talmudic terms – many of them in Aramaic – that I could kick myself for not having taken up Aramaic in college. At least I took one year of Yiddish, which has helped, at least a little.

But as a BT mom who couldn't go back in time to re-do her entire education, I confess I still know more Rolling Stones lyrics than Rashis, more Joni Mitchell than Joshua, and more Elton John than Ezekiel. However, I am pleased to report that I know more about Esther’s life than I do of Sir Elton’s. Phew!

Unfortunately, even good Jewish teens (like mine, and I'm sure yours, too) are liable to think that they know more than their parents. This is always irritating, but becomes even more so when you realize that in matters Jewish, your kids actually do know more than you do. A lot more. Fortunately, the Almighty anticipated this problem, which explains why He placed the mitzvah of honoring your father and mother in the “Top Ten” of the 613 Commandments.

When I feel that my kids need a reminder that I'm still an authority figure on topics more momentous than “what's for dinner,” I will look for opportunities to teach them a thing or two about life. I pride myself that I have taught them many such vital insights, such as: when you get an offer for something that's "free," there's always a catch; that when someone continues to insist, "Believe me, I'm telling you the truth," they are probably lying; and that when something walks like a duck, talks like a duck, and acts like a duck, it's a duck. I know – these life lessons are of course found somewhere in the Torah, but at least I can point them out without knowing Aramaic.

Finally, both my husband and I take solace that after having spent vast sums of shekels on day school tuition, probably enough to support a small emerging economy, my kids had better know more than we do, even if it leaves us feeling slightly undereducated. And last time I channeled my Nana and Papa up in Heaven, I sensed they were looking at me with bemused, knowing smiles, and also shepping nachas that their great-grandchildren have embraced Yiddishkeit as much as they had once done in the Old Country.