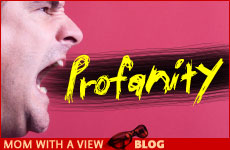 When we resort to swearing we diminish ourselves.

“Watch my mouth? Every time I try, my nose gets in the way!”

This silly line is from a children’s tape, an introduction to a song about a topic that isn’t silly at all -- the dangers of speaking in a negative way about others (otherwise known as lashon hara). But lashon hara is certainly not the only form of destructive speech. We can hurt others with words in many different ways. We can be mean, thoughtless, cruel, insensitive. To be a kind and caring person, we constantly need to watch our mouths.

And there’s even more. What we sometimes neglect to realize is that not only can we damage our fellow human beings through our misuse of the gift of speech, we can hurt ourselves as well.

I think most of us would agree that this is not an example of progress! Yet we have become immune to it, completely desensitized.

My husband and I live in a bit of a bubble. Since he is a rabbi, people tend to “watch their mouths” around us. But once we step into the “real world,” it’s everywhere. One of the President’s advisers is even (in)famous for the amount of profanity he uses. I wouldn’t want that on my tombstone!

And people in the working world inform me that it’s ubiquitous. It’s taken for granted. I’ve been told that “It’s the only way to get things done. It’s the only way people will listen to me.” It makes you seem tough and powerful. But does it really?

I would think that power resides in those people with a greater command of the English language, those who can use other words to express what they mean. Just as a truly talented comedian doesn’t need to rely on cursing for a cheap laugh.

I seem to be out of step with the world around me. I’m offended by harshness and vulgarity. I find it profoundly disturbing and cringe when hearing it.

But I think the real harm is in how we coarsen ourselves through the use of profanity, how we damage our dignity, how we abuse that precious gift of speech that is uniquely human.

I think that when we resort to swearing -- either to make a point, or to be cool, or just as a part of conversation -- we diminish ourselves.

Many of us are careful to only put healthy or organic or the latest gourmet food into our mouths but cavalier about what comes out of them.

And bit by bit, we callous our souls. Bit by bit, we diminish our self-respect and, contrary to our avowed purposes, actually lose the respect of others.

We may be able to cow people into submission through screaming and cursing, but fear is not respect. The profanity masks a lack of real power.

I wouldn’t want to return to the fifties (or any other era for that matter) but not everything about it was bad. Making a point without swearing was testimony to a greater refinement of character, certainly a goal for all of us.

It can be like one of those “increase your word power” exercises in Reader’s Digest to try to find appropriate substitutes. Think how much more articulate and eloquent we will become. Think how much more elevated and dignified we’ll be. We’ll be reaching for the spiritual instead of sinking to the physical.

And what everyone’s grandmother or great aunt used to say -- “If you don’t have anything nice to say, don’t say it all” -- can be applied here also. Certainly silence is preferable to a barrage of vulgarity assaulting our ears or the ears of those around us.

I saw a beautiful idea recently that the Vilna Gaon expressed in his Ethical Letter: For every moment that a person closes his mouth, he merits a hidden light that no angel or earthly creature can fathom.

Everyone Under One Roof