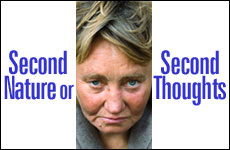 Navigating my way one day along a busy sidewalk in downtown Jerusalem, my head was immersed in all sorts of forgettable thoughts when suddenly I stopped short. A young woman had thrust her face into my line of vision.

The young face was old -- ancient, even, and haggard -- then turned young again, then old. She was talking at me.

Now, this city’s full of beggars -- nothing unusual there, especially at this time of year -- but this was your classic beggar, a beggar’s beggar, a beggar extraordinaire. She could have been an extra in an amateur production of Oliver Twist. (Wanted: Underweight female of indeterminate age/ good cheekbones/ for role of desperate, bedraggled, homeless pauper.) Her aggressive dark eyes and pleading mouth, the melodramatic hands imploring, demanding ...these automatically served to warn me: Beware. All this neediness, real or feigned, was too much. Too raw, too unrefined, and she was standing too close; my innards recoiled spontaneously. I could smell her. In anthropological lingo, she was violating my culturally learned spatial boundaries. What claim could she have on me, an inward-looking stranger in the pre-Rosh Hashana crowds, attending to mundane High Holiday errands? Some horrible and tragic calamity, apparently. An emergency! A horrendous injustice had befallen her children! It’s your job to save us!

Not a fundraiser for Hadassah, that’s for sure. The Jewish Federations would not have hired her.

There are Israelis whose Hebrew I take pride in understanding quite well, but this woman’s diatribe I could not construe at all. Her brow squeezed up in lines of torment (those brown eyes flickered, reminding me eerily of something, but instantly the illusion passed) and the chin lifted beseechingly, as did one upturned palm, long fingers reaching for my good fortune. For of course I’d already taken out my coin purse (though it was a little hard seeing what was in there, tipping it towards me to shield the fifty-shekel bill from her invasive gaze.) I’d make my getaway momentarily, but didn’t want to bear sin on account of her, either, just in case...In case, by some chance (Yom Kippur was in the air).she was for real. Theoretically, at least, a cluster of peeping little ones could actually be out there somewhere, in their dark, isolated nest, waiting for this scarecrow of a Jewish mother to fly home with crumbs, a taste for them of milk and honey.

Better to err on the safe side.

I extracted a ten-shekel coin and placed it upon that palm, noticing within me the sunflower of predictable, simple happiness which blooms involuntarily at such moments, in spite of my suspiciousness, in spite of myself. Her head cocked to one side.

She smiled, almost, and I saw my father.

My father, Saturday Review editor Norman Cousins, was someone for whom giving -- not only of his money but of himself -- seemed to come easily, by second nature. He gave away what he had, period, minus the second thoughts, and was a happy man. If this daughter had any complaints against him at all, it’s that by comparison to his goodness, my self-image (and ultimately, what could have been my inheritance) suffered proportionally.

Rabbi Avigdor Miller zt”l once said that when you do something good (and he was referring here, by the way, only to adults, not children) you should try to keep your mouth shut. The less said about it the better, and the better you’ll emulate God.

My father’s private thoughts regarding the Almighty will remain, for the most part, unknown to me, but he did, in my opinion, manifest many of His attributes. It was only after his death, for example, that I heard about the overcoat.

One snowy night in midtown Manhattan, someone broke into my parents' parked car and stole my father’s briefcase and brand new winter coat. “They’d put the magazine to bed already,” my mother told me, “and the whole dummy of that week’s issue was in there with a lot of other things. And it was such a nice warm coat, Daddy loved it.”

Minutes after reporting the theft in the local police station, my parents got a phone call to come on back. The briefcase had been found intact in a nearby garbage can, and the police had caught the thief red-handed.

“They found him walking off in the coat!” said Mommy.”We were tickled pink. After they handed us the coat and Daddy checked the briefcase and saw that everything was still in there, he asked where the man was. The police said not to worry, the thief was in their holding cell until they could transfer him to Federal Detention downtown. Daddy asked if he go in and meet him. The police were surprised but they said ok and Daddy was in there for more than an hour. When we left he told me that the two of them had had a very good talk, and that he was a decent man, just desperate, fallen on hard times and homeless, out of work and nowhere to go. Daddy found out when the trial was and came to testify. He told the judge that if they’d let the man out on furlough, he’d take legal responsibility for him, and that’s what happened. Daddy got him a job somewhere – I think in a printing press - and oh, he gave the man his coat. Daddy said it fit perfectly.”

Another memory, from a1980s visit of my parents to Israel: We were just getting out of a taxi whose driver had been grouchy and unpleasant, when my father (who was unfamiliar with Israeli currency) asked in an undertone how many shekels the tip should be.

“Oh, you don’t have to,” I said, thinking: especially not this guy. “We don’t tip taxi drivers here.”

My father remained seated and ignored my comment. “How much is this?” he asked me, holding out five shekel coins.

“About a dollar and half.”

He gave it to the driver, emerged from the car, and looked me in the eye. “You know, Sarah,” he said quietly, “taxi drivers have a hard job. Being in traffic all day, and people are rude. I’m so grateful I don’t have to do that for a living.”

Our forefather Joseph famously invoked the image of his father Jacob to save himself from sin. I can’t say the same for me. Faced by my brethren’s need, something uncomfortable within me -- I can’t even say what -- often turns away.

But I did get a glimpse of Daddy in that mother’s familiar Jewish eyes. I suppose that God, Who wants just to give, and Whose nature it is to give, is more like my father than like me. Yet for a mortal such as myself to keep trying (even unsuccessfully!) to transcend her nature and emulate Him is also noble, and a joy, and one of the most meaningful triumphs He made available to us humans.

Is Criticizing Israel Antisemitic?
In the Shadow of David and Goliath
Where Do the Laws of Nature Come From?
Saadiah Gaon, Rashi and Maimonides: How Three Rabbis Revolutionized Judaism
Comments