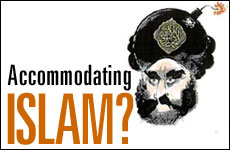 Religious accommodation never meant that everyone must conform to the dictates of these religions. Until now.

At first, the reports were infrequent. They seemed remote, like border clashes in some distant land. Then the reports became more insistent. Today, dedicated Web sites track the new phenomenon on a daily basis: the accommodation of Islam at the expense of the dominant culture and religion.

Now there's nothing new about making room for people to worship in whatever way they see fit. America was founded for exactly that reason. And by the 1960s, other Western democracies embraced the idea that people should be free to observe their own faith.

In government, in the workplace, even in the prisons, everyone -- Christians, Jews, Muslims, and others -- needed breathing room to worship as they chose. American law called this idea "religious accommodation."

Back then, accommodation meant removing obstacles to religious expression. Jews needed to be in synagogue on the Jewish holidays without fear of losing their jobs or being penalized by their schoolteachers. Muslims needed time off for their daily prayers. In prisons, both needed access to food that satisfied their respective dietary laws. And so on.

But it was never suggested that religious accommodation meant the whole country must conform to the dictates of these religions. Until now, that is.

Today, in many parts of Europe, we see Muslims demanding that the majority culture change – on a wide range of issues -- to conform to Islamic law. This remarkably aggressive stance has gone from unthinkable to non-negotiable in less than a generation.

Suppose Jews were to demand that cheeseburgers be banned in all restaurants across America.

The issue here isn't respecting other religions, or helping minority groups make their way in the larger society, or being flexible to accommodate religious diversity. No, the issue here is remaking society to conform to the religious law of one particular faith. This is something new – and very troubling.

To see what it really means, let's imagine would happen if Jews made similar demands in the United States.

Take food. The Torah forbids Jews to mix meat and milk, or to derive any benefit from such mixtures. Suppose Jews were to demand that cheeseburgers be banned in all restaurants across America, because they offend the Torah?

Now take business and commerce. The Torah forbids Jews to charge interest on loans made to other Jews. (Halacha and Sharia law actually have much in common here.) Suppose American Jews were to insist that all loans made in America should now be interest-free in order to comply with the Torah?

These two simple examples show what's wrong with the whole idea. The Torah speaks primarily to Jews, and it would be outrageous if Jews suddenly expected all Americans -- Protestants, Baptists, Catholics, Unitarians, Seventh-Day Adventists, Mormons, atheists, etc. -- to keep the Torah.

But the equivalent of that outrageous demand is now being made in Europe and America on a regular basis. It isn't enough for non-Muslims simply to respect their fellow citizens who follow the way of Islam. No, non-Muslims are now expected to observe many of the precepts of Islamic law.

Like most great waves of historical change, this one began by lapping gently around our ankles. No one is demanding that Germany outlaw all pork products -- yet. No one expects the non-Muslim women in Paris to cover their heads -- yet.

But it would be a mistake to think that all is well because those extreme demands aren't being made today. Recall that no one threatened to blow up British banks if they gave another toy pig to a child. No one threatened to attack Yale if it reprinted those cartoons.

No such threats were necessary, you see. Western culture is yielding quite willingly without the need for threats. The mere specter of someone claiming "religious intolerance" or "anti-Muslim bias" is enough to encourage a civilized and quiet surrender.

Every little surrender sets the stage for the next -- and larger -- confrontation.

When the basic principle is unacceptable, every little surrender just sets the stage for the next -- and larger -- confrontation. If we agree today that there's actually something wrong with a British bank distributing toy pigs, what will we say when the demand is made to ban the sale of all pork products? If we agree today that a non-Muslim stewardess must dress and behave like a Muslim woman, how can we defend the right of non-Muslim women in Paris to leave their heads uncovered?

The West desperately needs to re-think what it means to be accommodating. And the hour is growing late.

This article is dedicated in loving memory of the author's father, Reuven ben Ya'akov z''l.

Michael Steinberg lives in the Washington, D.C. area, where he studies Torah in person, over the telephone, and over the Internet.