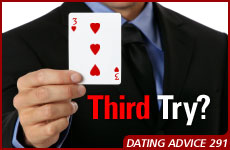 She broke up with him twice. Is it time to give up?

I dated a young woman for a month and I felt it was going very well when she suddenly ended it without giving a reason. I got up the nerve to call her to inquire why she had ended it, and she said she wanted to continue dating me again, no reason given.

We went out again within a matter of days, got along well and never discussed why she had ended it. It became clear that she was under some kind of pressure to know whether I was "The One" soon into the courtship. Two weeks after we started dating again, she told me that she couldn't continue as she didn't feel it was progressing. She was unable to elaborate or offer any reason to the friend who had set us up, and seemed very confused, saying that I had all the qualities she was looking for. I decided not to pursue it any further in spite of my feelings.

Is her behavior normal? Is it normal that I should still be thinking about her a few months later? Should I wait a year and try with her again? And do I need to get over this before I decide to date other women?

It sounds to us that you were dating a young woman who could benefit from guidance about how relationships develop and what dating expectations are realistic and unrealistic. At the same time that she was second-guessing herself because things weren't developing as quickly as she felt it should, you felt there was real potential and you were developing feelings for her.

It's very common for daters to become "invested" in their courtship at different rates, and it is often the case that the man feels an emotional attachment to the woman before she feels the same. It's unfortunate that this young woman didn't stay in the courtship long enough to see how things developed. If she was less confused or had a knowledgeable dating mentor, your courtship may have continued to progress. But it is also possible that you would have discovered that you weren't right for each other.

It isn't unusual for you to be thinking about this woman even a few months after the break-up. Clearly, she "got to you." Sometimes it takes several months to get over someone whom you really felt connected to. But we also think that one of the reasons that it's hard for you to stop thinking about her is that you believe that the two of you really had a chance. Therefore you can't accept the idea of the break up because of this and you are still hoping that in time, she'll learn a little bit more about herself and about dating and you can try again.

She needs to address the reason she broke up in the first place.

It sometimes does happen that couples who stopped dating for one reason or another go out again, and the second time their courtship succeeds. But that only happens if they address the reason they broke up in the first place. The woman you were seeing would need to address the reason she ended things, and she would need to determine that it's not an issue any more. A dating mentor might be able to help if she broke up because she didn't really know what she wanted, or had unrealistic expectations. But if she decided not to continue because there really was an issue that she was simply unwilling to share with you, she'd have to resolve that issue before she could agree to go out with you again.

For now, however, you need to move forward. There's no benefit to putting your social life on hold for a year in the hope that during this time the young woman you dated will gain more clarity about herself so that the two of you can try again. A year from now, each of you may have grown in different directions and may no longer be well-suited to each other. If you are really determined to try again with this young woman, then explore that possibility now. We would suggest calling the mutual friend who first set you up to say that you are still interested in this young woman, believe she broke things off because she was pressured to know if you were "the one" far too early, hope that in time she has been able to get some good advice about dating, and wonder if she can be approached about going out again.

If you get a "no" answer, then it is best for you to tell yourself, "Even though I have strong feelings for this woman, I'm going to put it behind me for good."

This closure is very important to your healing process. Once you are able to acknowledge that your courtship cannot be resurrected, you will be able to let that hope go. You'll still feel disappointed that things didn't work out, but that will diminish with time. Many people have experienced similar disappointments -- things didn't work out with someone they liked a great deal or really felt connected to, and it takes time to mourn this loss.

But there actually is something beneficial about having this experience. It means that you felt very connected to another person, and it lets you know that you can relate to someone else this way, and it gives you encouragement that you will be able to connect to someone who is truly right for you.

Once you can acknowledge that, you can start dating again. In the beginning, you may have to remind yourself that your former date wasn't The One, tell yourself that her memory can't accompany you on your dates, and tell yourself not to compare your feelings or your reaction to the new person you are dating to how you felt with her. In time, you'll be able to date without having to give yourself these reminders.

Dating Maze #258 - Almost the One
Should I Break Up, Get Engaged or Keep Dating?
Time Is Your Precious Commodity
A Constant World in Flux
Comments
MOST POPULAR IN Dating
Our privacy policy