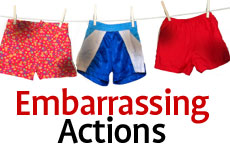 Whatever a Jew does reflects the entire Jewish people.

Your child damages a neighbor's property, you are responsible.

But that can mean two distinct things. Either, simply, that as the child's parent you are where the buck stops.

Or it may mean something deeper. If the boy didn't just accidentally hit a ball through the Jones' picture window but rather aimed a rock at it -- and had been influenced in his disregard for the property of others by some remarks you made -- you are responsible in much more than the buck-stopping sense.

The Jewish concept of "arvut," -- the "interdependence" of all Jews -- is sometimes understood as akin to the first, simple, sense of responsibility. Jews are to regard other Jews as family, and therefore to feel responsible for one another.

But, the celebrated Jewish thinker Rabbi E.E. Dessler teaches, Jews are responsible for one another in the word's deeper sense too. When a Jew does something good, it reflects the entire Jewish people's goodness. And the converse is no less true. Thus, when Achan, one man, misappropriated spoils after the first battle of Joshua's conquest of Canaan, the siege of Jericho, it is described as the sin of the entire people (Joshua, 7:1). Explains Rabbi Dessler: Had the people as a whole been sufficiently sensitive to the Divine commandment to shun the city's spoils, Achan would never have been able to commit his sin.

The much publicized arrests last month of several Jews, amid a larger group, on a variety of financial charges caused all sensitive Jews acute embarrassment. But the vivid image of Jews -- religious ones, no less -- being carted off by federal agents needs to do something more than embarrass us. It needs to spur us.

Not because we have any right to assume the worst about the accused; we don't. And if in fact there were violations of the law, we don't know the circumstances, the motivations of the accused or even if they were aware of the pertinent laws (which might not make a difference to a trial judge but should to the rest of us). Trial by Tabloid is not Jewish jurisprudence.

But the images themselves must make us think. In particular about other, confirmed, cases of Jews -- including religiously observant ones -- who have in fact engaged in "white collar" crime. Not to mention several identifiably Jewish, if not particularly religious, Jews who have even achieved broad notoriety for their societal sins.

And so, the deeper concept of arvut leaves us to ponder the possibility that some less blatant and less outrageous -- but still sinful -- actions of other Jews, ourselves perhaps included, may have, little by little, provided a matrix on which greater sins subsequently came to grow.

Every child who received a Jewish education knows that even a small coin placed in a pushke, or charity box, is the fulfillment of a mitzvah, the commandment to give charity. It should be equally apparent, especially to all us grown-up children, that the misappropriation of even a similarly small amount of money is a sin.

And so Jews, whoever and wherever they are, who cut corners for financial gain -- who underreport their income or avoid taxes illegally or are less than fully honest in their business dealings -- contribute thereby to the thievery-matrix. And they bear responsibility, in however small the ways, for larger crimes committed by their fellows.

What is more, even those of us who are innocent of any financial indiscretions might also be unwitting contributors to the critical criminal mass. Because things other than money can also be "stolen."

The Torah speaks, for example, about two forms of oppressive practices (ona'ah): financial (as in overcharging) and personal (as in causing pain to others with words). The Talmud also calls the act of misleading another person "stealing knowledge" (g'neivat da'at); and considers it "robbery" to not return another's greeting. Halachic decisors, moreover, note the forbiddance to "steal sleep" -- to wake someone unnecessarily or to keep him up when he wants to retire.

So even those of us whose financial ledgers are in order would do well to introspect. Are we sufficiently careful not to use words in hurtful ways, entirely meticulous in advice we offer, fully responsive to the good will of others, truly cautious about not disturbing their peace? If not, then we are -- in a subtle but real way -- part of the perp-walk picture ourselves.

The Jewish month of Elul is here. Leading as it does to next month's High Holy Days, it is a time when the Jewishly conscious take spiritual stock of their lives. On Yom Kippur, Jews the world over will repeatedly recite two confessional prayers, "Ashamnu" and "Al Chet Shechatanu." Both, oddly, are in the first person plural. It is a collective "we" who have sinned. As the commentaries explain, that is because, among Jews, even sins of which the individual supplicant may be personally innocent, implicate us all.