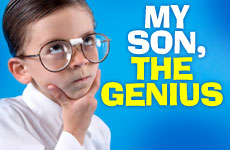 I know what you're thinking, but my son really is a genius.

The day (or should I say "days") I was in labor with my son, I knew something was up. After 36 hours of hee-hooing and enough IVs to push a moose through a water slide, he'd decided, "What? Me move? I don't think so!" So, there he stayed, gleefully.

Now, with the threat of "Labor" Day looming to weeks, my doctor sensitively suggested: "Either we do an emergency C-Section, or you'll give birth to a long pointy head." I jump-waddled onto the surgical bed. If not, I'm sure he'd still be there, swigging a Coke with one hand, and e-mailing me to swallow an IPod with the other.

And so "my son, the genius" entered the world. And I learned – late – this gift comes with a curse.

As an adult, with an intense full time career in criminal justice, I knew bupkes about babies, never mind weird ones. (I assumed "swaddling" was a type of medieval torture.) I had no expectations, no comparisons. What I did have was terror. Not just normal new mom mishegoss, like nailing everything other than strained peas onto the ceiling. No. I was the Empress of Mishegoss. When my Seth was diagnosed with a hernia, I had my dentist in the operating room ... to assure me it wasn't cancerous. I saw his chart. In bold, the pediatrician wrote: "MOTHER: LUNATIC!"

At nine months Seth was attaching magnetic letters to the fridge in alphabetical order– while sounding them out.

The "positives" gave me yet another title: "Crazeeyenta." At nine months, I noticed Seth, playing by the fridge, was intently attaching magnetic letters in alphabetical order– while sounding them out.

I frothed. Spewed liquid naches, like a maddened beast. All my clinical degrees,sense – lost in transformation over my progeny's magnetic letter miracle. My metamorphosis to Mama-loon was complete. What's the first thing Mama-Loons do? Call "witnesses," doling out solar filters for the event. No matter how "cool" a Jewish mom seems, "Is he smart!" makes us "kvell" like "Now this kid's a future quarterback!" to anyone else.

After an exhaustive search, I found an "Institute" with a system to teach infants to read -- and do calculus. (I'm hiding– in shame.) Games were flash cards. By 14 months he babbled "Pee-bah!" when I held up a "Peanut Butter" card! Delirious, we all "pee-bah'd" in our pants. By two, he could ID hexagons and octagons. From there, Seth made faster connections than Sprint. The only thing faster, was our ability to "spread" the news – and that included strangers.

Which is why I couldn't understand why no one wanted to "play" with us. Instead of singing "Wheels on the Bus," other moms wanted to throw me under one. "Maybe you should quit carrying the cards ... and the abacus," suggested a friend ...gingerly. In fairness, private school in Manhattan is de rigeur. The Big Kinderlekh Competition starts at age three when "King of the Hill" means being "Top of the Prep Track" bound for Harvard. If your babe, thumb in mouth, says "wee wee" in the testing room, Boom! He's stuck in a second-rate Pre-K, and, at 18, doomed to Knish U-- on line. Need a tutor to teach your toddler to draw an isosceles triangle? Call 212-anything. All Manhattan-ites have the 411, or know a couple who paid a tutor, then needed Prozac when their progeny "failed" triangles. As for Seth ... when the tester asked him to name two animals, he said, "Two ‘hippopathamuses.'"

Ah. And so we hit the core of the 155 I.Q. gift-cursed. At nine, he landed the role of young Nathan in The Rothschilds, understudied in Lost in Yonkers, taught himself piano, started composing at ten, and wrote analyses of Plato at 12. But my bragging rights had developed a definite wormhole that got bigger with age (his, and mine). It started to dawn that the clinical term for "genius," could also include "Emotional Deficit Disorder."

I eventually learned that many of these kids actually think differently. I call them "doughnut-hollers" after the genius who went "Eureka!" when looking at the deep-fried inner tube, and said, "We'll sell the holes and make a fortune!" During second grade, Seth's teacher, confused, called me. They'd returned from a class trip to a hoo-ha parent's glass factory. When the children were entering the grinding room, they were instructed to put on goggles. Seth politely asked, "What about the other five holes on my face?" And sweetly sat out.

At eight, "My son, the genius," was a terrific techie. Unfortunately, one of his experiments blew the school's entire computer system. (I'm still paying for that one.)

By fourth grade he spent his time at the Public Library – instead of doing homework -- intent on learning to stop any impending apocalypse. During his "Ingmar Bergman" phase, when I asked him if wanted juice in his lunch box, his answer? "In a thousand years will it make a difference?" Oy.

I learned that: genius is a marvelous "poseur" for maturity and can sandbag it. If a child can talk like an adult, it's easy to assume he has adult judgment. Wrong! Worse, he thinks he does. Which is how he wound up driving from New York to Nashua, New Hampshire, at 14, to "rescue" a girlfriend he met at his college – for adolescent geniuses. (Now that was genius -- putting 100 tweenie geniuses together – in the woods -- and us sending him there. The only thing missing were assault weapons.) I'm also still paying off the taxi meter.

I learned that: "success" came way too easily. At seven, Seth scored #1 in his school in a national science aptitude test. And got zero in "words." How is that possible? Just run through, skip a box and throw off the rest of your answers – because you're not bothering to listen. Failure wasn't on his radar, or his "fault," any more than the need to care and endure. Like child stars who crash on adolescence, child "geniuses" can only coast as children. As he grew, he saw less "gifted" peers, who struggled, embraced mistakes, and connect emotionally with the world, succeed. And was left behind – agonized and lost.

We both learned that such a generous human gift, places the recipient in danger of losing the very humanity it's meant to serve. "Genius" easily becomes you, the measure of all worth. And what use is genius – without heart? Without understanding and empathizing with the pain and joy of the human struggle.

He has a way to go. But, at 28, he's finally on the path, doing brilliantly academically, and tutoring others. Perhaps, like late bloomers who take longer to blossom, the very gifted may demand more time to "grow" into their intellect. Meanwhile, I thank Hashem that Seth hasn't ended up like some – the smartest philosopher on Skid Row. That he's learning the true meaning and responsibility of his gift. And that I've quit being an "admirer" and become a real parent to an already difficult child I'd helped create, so he could find his neshuma (soul).

I humbly say to all new parents, especially those whose progeny have unusual gifts: the job demands teaching neshuma, not shepping naches. No longer lost, Seth can now access his "genius," tempered with humility, humanity, and endurance that comes from challenges, failure, pride in the trying.

Can I Say That?