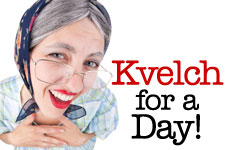 I have bupkes to brag about. And that sounds like I'm bragging.

In the early 60's a TV game show dominated the airwaves in most folks' homes. A precursor of the Reality TV onslaught of today, which pits desperate, determined egocentrics against one another in a series of humiliations for huge financial gain, "Queen for a Day" presented four modest women competing with their tales of woe for the sympathies of the audience and one measly day of nice treatment. This queenly day featured limos to dinners at the Brown Derby Restaurant and an evening at the Moulin Rouge Night Club in Hollywood, a hotel suite in Anaheim, and beauty treatments in Beverly Hills. The program was a veritable commercial for the luxuries of Southern California in the 60's, and most especially for the Fine Art of Complaining.

My family was the "glass half empty and the water poisoned" type.

This art form was never news to Jews, however, who got that gift genetically. My family has traditionally been a "glass half empty and the water poisoned" kind of people. My lineage long ago perfected the kivetch, devoutly sharing a Jewdhist, ancestral outlook: "Accept misfortune as a blessing. Do not wish for perfect health or a life without problems. What would we talk about?" Ah, how true. Life for our Jewish elders was about malingering, luxuriating loudly in the malaises of each day. Hence finding things to complain about whilst living in luxurious Southern California was to be the new frontier of accomplishment for Jews.

Our day has arrived.

Times have changed here in chronically lovely Los Angeles, and not one Jewish person I know who isn't completely meshugah isn't complaining about them. Our town is suffering the state's cutbacks acutely (thanks Ahnold), and the shock of doing without is more than many can bear. Sure, one can still go in a limo to get a good facial, but getting one's trash picked up by others may prove to be a problem in months to come, unless we can employ all the prisoners about to be freed from local lock ups to do such things.

Hiring qualified help is harder than ever, as our expert Mexican laborers are returning to their homeland where conditions now seem far more favorable than here. Now even my more menschy and womenschy friends are dwelling on hellish dilemmas.

A prominent Reality TV producer pal, who shall remain nameless, was lamenting of late the damage delivery men had caused to his home. Whilst installing a huge new energy saving appliance (my noble friend is so self-sacrificing and ecologically correct), the novice workers had unleashed water which poured into the walls and warped the red oak hardwood floors in the lovely laundry room in my friend's refurbished four car garage, hence disabling his new appliances, and exiling his hybrid cars. The family's maid, refusing to do hand wash, had quit, abandoning the family to launder their own socks. I was stricken with grief for him.

There was great joy in his oy, having found a sympathetic listener like me, who clucked and "awww-ed" dutifully. But the time release kvetch for me later that night was that this nice Jewish man is manning a mansion of massive proportions by producing Reality TV which puts me and my actor friends further out of work. Compared to my modest cottage, his place is planetary; he has far more bathrooms than bladders populating his family home. His garage has a nicer stone floor than my parlor. He, fortunately, has the extra money to spend to save the environment and hence to save money on his water and electric bills, for which the city, the Department of Water and Power, and the appliance company were giving him rebates. His kvetch landed belatedly like a kvell.

And my readers here at Jewlarious are probably kvetching that my kvetch-- dropping an unnamed producer's complaint and speaking of my own "modest cottage" in weather free Los Angeles--is a kvell on my part. Hence, I am coining a new expression:

"Kvelch"—a kvetch that lands like a kvell on a listener who has less fortunate circumstances to kvetch about.

My new hue and cry is this: who's a Jew to kvelch to? Keeping up with the Jonesteins these days requires worsening the sound of your circumstances, which may already, if you're lucky, be dire, which will always sound like bragging to others who will see themselves as less fortunate because they don't live in Los Angeles anyway.

So I've pitched my pal a pilot idea for a new Reality Game Show called "Kvelch for a Day!" and he's bought the sucker and made me a producer!

This half hour documentary game show first presents footage of previously prosperous players who have fallen into piteous (by their definition) circumstances, then shows them competing for meager prizes with the best "kvelches" they can create. It's got everything going for it—an intimate look at how the rich lived; big falls from grace to fiscal ruin; then, in the game show section, it forces them to compete for things they used to own outright. Broadcast in Hi Def, 3D, prime time TV, hosted by Richard Lewis or the like, this show promises to combine the best prurient peek-a-boos of private lives ruined, and the best kvelching that television has ever mustered!

Poor me—I have bupkis to complain about, and that sounds like bragging.