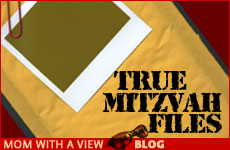 The power of kindness.

It's popular to write true crime stories based on the original FBI or police files. I think that our true mitzvah stories are stored in a celestial filing cabinet, but I'm going to share one mitzvah story with you as it was told to me.

When my friend Chana moved about ten years ago, she wanted to bring blessing to her new home. How about a new mitzvah to correspond to her new residence? A friend suggested she try something that was hard for her to do. (The friend wasn't me; I would have suggested that she lead with her strengths.)

Chana decided to visit patients in the hospital. But not just any patients -- patients who were very ill, patients in the ICU, in comas, at death's door. She would regularly go to their rooms, sit and talk, sometimes to be rewarded by a smile, sometimes uncertain if they heard her or not.

The chaplain at the hospital, a kindly middle-aged rabbi, was her mentor. He taught her through word and deed how to help these people, and how to dig deep within for the reserves to put a smile on her face and walk briskly into yet another room. "He showed me how to perform kindness in a way I had never seen," Chana told me.

The work took its toll. The patients were not always receptive, the endings not always happy. But the chaplain remained by her side, her own personal cheerleading squad, giving her the strength and encouragement to continue.

Unfortunately the rabbi himself became ill. Not only could he no longer be a source of encouragement, but watching him suffer through his debilitating disease further drained Chana's will. She began to feel a sense of hopelessness about her activities. All her doubts came crowding back in -- "No one seems to hear me anyway, what's the point?" She wasn't sure that she could continue her volunteer work at the hospital.

But the Almighty had come to rely on Chana's acts of kindness; He stepped in to intervene. 'Fortuitously' Chana was scheduled for a physical examination with her internist and during the time Chana confided to her doctor her doubts and anxiety.

He told her an amazing story about his sister. As a young woman she had an unusual illness that resulted in her spending six months in a coma. Even though she was a complete prisoner in her body, she could actually hear everything everyone said. She just couldn't respond.

"None of your efforts are wasted."

Visitors, especially those with a lot to say, were her lifeline. When she finally emerged from this terrifying state, she was able to recite whole conversations verbatim. "Those words kept me alive, kept me tethered to reality, gave me something to hang on to," she always said.

"None of your efforts are wasted," the doctor advised Chana. And he told of yet another personal experience.

"My grandmother was very ill with Alzheimer's. She was in a home and didn't recognize any of us when we went to visit. My grandfather lived with us but was too frail to go, and besides, she didn't recognize him either. This situation continued for 10 long years until my grandfather passed away. We debated whether we should even bother trying to communicate this sad fact to my grandmother. Since she didn't understand anything anyway, what would we be accomplishing? In the end, we decided that she deserved to know (whatever "know" meant). My father went to the home and gently explained that her husband had died. An hour later, my grandmother's soul departed from her body. She had clearly heard my father."

These stories changed Chana's perspective. She was able to appreciate the power of her words and to look beneath the surface for the meaning of her actions. She no longer felt that her words were wasted, discouraged by her efforts. She realized the true meaning and potential of her actions. She was grateful for her experiences and what she had learned, glad that she had attempted something difficult.

This recognition buoyed her spirits. She realized that she had truly made a difference. She was energized anew by this knowledge and ready to return to the hospital. She also felt she wanted a new challenge, to make an impact in another way. She wanted to push herself yet again and move into uncharted territory.

The Almighty stepped in once more. Not long after, Chana's oldest daughter gave birth to a beautiful baby girl, her first grandchild. After watching the labor and delivery, Chana had a revelation. Although not all births would be of her grandchildren, this is where she wanted to work – bringing life into the world!

Today Chana is still at the hospital – in a full-time capacity as a certified labor and delivery coach. She does it with joy but also with an understanding and compassion that wouldn't have otherwise been possible.

The rabbi, her mentor and friend, unfortunately succumbed to his illness, but his kindness and generosity reverberate through Chana when she coaches mothers as they usher a new generation into the world.

Punk Rocker for the Day

Our Collective Tragedy
Why Are The Prayers Of Yom Kipur So Repetetive?
Ha'azinu 5783: A Time for Unity!
Twisted Thinking
Comments