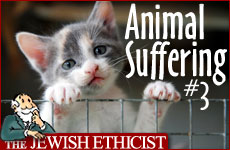 Animal suffering is sanctioned when it serves a legitimate human need.

Last week we examined the various Torah verses mandating humane treatment of animals; we saw that beyond the underlying prohibition of cruel treatment towards any animal, there is an additional obligation to act positively to relieve the suffering of animals that work with us and serve us -- for example, to give our animals rest on Shabbat, to relieve the load of an overloaded pack animal, and so on.

There is still a bit of a paradox. We are not allowed to cause suffering gratuitously to any animal, but if there is a valid human need then even if the animal will suffer the treatment is not considered cruelty. For this reason, there is no question that it is permissible and proper to use animals in medical experiments that are expected to lead to treatments that will alleviate human suffering. But this very usefulness is also what cements our obligation to show concern for the animals.

So the prohibition on animal suffering would never forbid using animals for an important human need, even if the use involved animal suffering; but it would forbid causing suffering not necessary for that need. Nachmanides writes, "[God's] mercy on creatures with an animal soul does not extend to prevent us from using them for our needs." (1)

This standard seems to be stricter than the standard for bal taschchit, which forbids gratuitous harm to or destruction of anything valuable or useful to humans. Regarding i>bal tashchit only gratuitous harm is forbidden, but tzaar baalei chaim, the prohibition on animal suffering, would seem to forbid also disproportionate suffering. In one place in the Talmud the sage Rabbi Pinchas ben Yair states that hamstringing an animal would constitute forbidden suffering, but only killing it would constitute gratuitous harm. My interpretation is that hamstringing the animal does bring some benefit, but not enough to justify the suffering induced. (2)

An additional reason mentioned by the rabbis for human treatment of animals is that it cultivates humane conduct towards people, while inhumane treatment of animals carries the danger of inculcating insensitivity towards other people. (Some recent research confirms a connection between people who torture animals as youngsters and those who are violent as adults, though there is no way to tell if there is a causal relationship.)

The Sefer Hachinukh (596) writes: "Among the motivations for this commandment is to accustom ourselves to delicate souls, choosing the straight path and adhering to it, and seeking mercy and kindness. And once we obtain this habit, then even towards animals, which were created to serve us, we will show concern."

And Nachmanides writes: "The reason for refraining [from taking the eggs in the presence of the mother] is to teach us the quality of mercy, and not to act cruelty. For cruelty [towards animals afterwards] spreads in the soul of man [and expresses itself towards people as well]". (1)

Each consideration is an independent aspect of the law. For example, the noted Medieval authority Rabbi Yisrael Isserlin ruled that plucking geese while they are alive, when there is a need for the feathers, is permissible; the geese do suffer, but there is an evident benefit. However, he then writes that people customarily refrain, because plucking the birds in this way leads to bad traits. (3) Rabbi Moshe Isserlish writes approvingly of this custom. (4)

The Jewish Ethicist: Overtime for Lost Time
Should I Break Up, Get Engaged or Keep Dating?
Time Is Your Precious Commodity
A Constant World in Flux
Comments
MOST POPULAR IN Current Issues
Our privacy policy