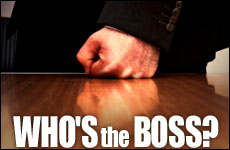 Nearly all anger is rooted in the thought that "I can control the situation."

In 1986, scientists at the Harvard Medical School tested the psychological well-being of 1,305 men. Using the Minnesota Multiphasic Personality Inventory (MMPI-2), which includes a section designed to quantify anger, the scientists gave each participant a score that indicated his level of anger and hostility. The men returned for comprehensive medical examinations every seven years, at which time they were checked for heart disease.

When the study began, all the participants were healthy; but during the seven years of observation, 110 of them developed heart disease. The men with the highest anger scores were at the greatest risk for developing heart disease. And the risk was substantial: heart disease was diagnosed three times more often in the most angry men than in the least angry men.

These statistics are frightening, but anger can be overcome.

Nearly all anger is rooted in the thought that "I can control the situation." This thought leads us to form mental images of what should be happening to us and how other people ought to treat us. When these expectations are not fulfilled, we become angry.

This concept is clearly illustrated by parent-child relationships. Perhaps one of the reasons people so frequently find themselves angered by their children is that parents have such profound feelings of control over them. Having brought them into the world and having provided them with everything they need – clothes, food, schooling – a parent feels he "owns" his children, just as he owns a piece of property. Since he has mental images of how they should behave, he becomes frustrated when they act up.

Of course, it is a parent's responsibility to educate his children and make certain that they behave properly, but at the end of the day, children have their own free will. If they disobey, the correct response is not unrestrained anger, but another attempt to calmly teach them better. Even when the best way to teach them is through showing anger, it is meant to be an external, premeditated show of anger, never a real, inner, spur-of-the-moment anger.

Besides persuading himself that he controls other people, a person also imagines that he controls his time. That is why nothing rattles a person more than when his meticulously planned schedule goes awry. We can all relate to the frustration of missing a plane or watching the clock tick by as we wait for a friend, knowing that our time for lunch together is getting shorter and shorter. Convinced that he has some kind of ownership over his time, he becomes irritated when faced with the stark reality that he is not really in charge after all.

Who's Really in Charge?

Since anger is often rooted in issues of control, one way to overcome anger is to come to terms with the reality that we are not in control of our lives – God is. As King Solomon, said, "Man makes many detailed plans, but the counsel of God alone prevails." Life demands flexibility; to be able to adjust easily from one's envisaged plans to those of the Master Planner is a key element in conquering anger and calmly dealing with the unexpected.

What matters most is not whether he arrives on time, but whether he is the best person he can be along the way.

Once a person understands and accepts that God is in control, a large amount of anger can be eliminated from his life. But this knowledge also helps overcome anger in another way, namely, by changing the focal point. Instead of focusing solely on the outcome – that things didn't turn out as expected – one thinks more about the intermediate steps. Take, for example, being late for a meeting or wedding: When running behind schedule, the reason a person finds himself angry with anyone who gets in his way is that he is concentrating exclusively on the end result of being on time. He views the preceding steps – the process of getting there – as inconsequential and, therefore he is frustrated when they don't go as planned.

When one bears in mind that God is in control, his perspective changes, for he realizes that the end result is not in his own hands, but in God's. One who is late no longer gets annoyed, as he understands that what matters most is not whether he arrives on time, but whether he is the best person he can be along the way.

When a person expects frustrations and mentally prepares himself for them, he is capable of managing almost any challenge. The reason people are so frequently frustrated is that they are not expecting the test. They think only of the end result – getting to the meeting on time or being ready for Shabbos – and view any obstacle along the way as a nuisance. But the "obstacle" is not an obstacle at all; it's the main point of the event. Facing that challenge and conquering our undesirable character traits gives meaning to our lives.

This article is an excerpt from Rabbi Roth's new book, Relevance: Pirkei Avos for the Twenty-First Century. Taking selections from Ethics of the Fathers, the book shows how the classic text of Pirkei Avos pertains to the modern world, and is as vibrant and contemporary as if it was written today.

Rabbi Dan Roth is the founder of Torah Live and author of “Relevance: Pirkei Avos for the Twenty First Century” . His ability to take Torah ideals and communicate them in today’s language – a thread that runs throughout his book - led him to establish a unique and innovative organization called,"Torah Live." Rabbi Roth studied in Mir (Yerushalayim) and received semicha from the Chief Rabbinate of Israel. He is now a popular rebbe in Ohr Samayach as well as a sought after lecturer in schools and communities throughout the world.

If You Could be Superman

Nothing is Rotten in the State of Denmark
The Blue Beyond
Great Place to Live
Is Eating Supposed To Be Spiritual?
Comments
MOST POPULAR IN Spirituality
Our privacy policy