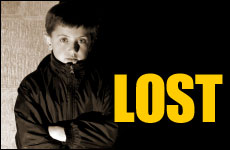 My son wasn't the only one who got lost that night

"Can I hold the money?" my nine year old son asked me as he swung his feet back and forth, banging them against the bus stop bench. "I'll be careful."

I handed him the money and looked out into the starry night for signs of a bus. I was accompanying my son to his first art class and looking forward to a few minutes of solitude with him.

"Be careful," I warned as I heard the clinking of coins moving from hand to hand. I watched my son roll the coin over his thumb and into the wells between his fingers.

"Of course," he said. I heard the distant rumblings of a bus clambering up the hill, followed by a plink.

"I did." His face creased, his mouth twisted. "I'll look for it." He scooted under the bench, sliding his hands along the dark slab of concrete. I crossed my arms and squeezed myself tight. Don't ruin this, I told myself. He'll find it.

He emerged. "I can't find the money."

"Well then how do you expect for us to get on the bus?" I asked him. "You were holding enough money for a monthly bus card." Numbers, dollars and cents flew through my mind, out of my pocket and into the gutter.

I could almost see the pieces of his heart fragmenting.

"I'll keep looking," he said, trying not to cry. He scrambled underneath the bench. I stooped down and ran my own hands along the cracked pavement near the bus stop. How far could the money have gone? It could have fallen over the ledge. Then it was really gone. My son's fingers met my own. I looked into his pleading eyes.

"I shouldn't have given you the money to hold," I said, my voice sharp. "It was silly. I should have held on to it myself. What on earth was I thinking?" I could almost see the pieces of his heart fragmenting. The bus was approaching.

"Can we still go to my class Mommy?" my son asked quietly. I sifted through my pocketbook, listening for jingling change.

We stepped on to the bus and my mind was still bemoaning the lost sum of money.

We sat silently at the back of the bus. The guilt was piling up inside of me but I said nothing. At the next stop a group of kids my son's age piled on to the bus. He gave me an ‘I'm too cool to be sitting with my mother' look.

"Go ahead," I said. "But let's keep eye contact so that you know where to get off. And in case we get separated, get off by the giant Menorah in the middle of the city like I told you."

He nodded and ran to join his friends. I kept my son in my line of vision as the bus became increasingly more crowded. One man got on the bus who struck me as odd. I started to worry about my son at the front of the bus, but I held myself back from embarrassing him. The bus filled up and slowly his black and white shirt became a blur of grey. But I kept my eye on him.

We approached our stop. I looked for my son. Where was he? I pushed my way to the front of the bus. I didn't see him.

"Moshe?" I called out loud. Nobody answered. The bus was emptying out and now I could see that he was not on the bus. I jumped off the bus and looked around, bewildered. Where did he go?

"Moshe!" I called out into that same starry night. My palms were wet. He knew exactly where the Menorah was. Maybe he accidentally got off at the stop before the Menorah? I ran down the hill towards the earlier stop. He wasn't there. My mind wandered to that odd looking man on the bus and I squeezed my eyes shut against the possibilities...

My son was lost.

I called my husband at work. The battery on my cell phone was low.

"Moshe's lost!" I breathed. "Please. Take the car. Try and find him." I ran as I spoke, my breath coming in little clouds tinged with fear. I told him the story in scattered bits and pieces.

"Don't worry," my husband said. "This is a very safe city. He probably got off at an earlier stop and walked to class."

"He doesn't even know where class is," I said. "Take the car and scour the city."

I ran down one block and then another, pausing at every bus stop, listening to my voice crack as I called my son's name into the still night air.

I thought of all the things that had been lost so far that evening.

My son's self esteem.

And now my son.

"Let me find him. And I will try never to be sorry for small things lost."

I filed through the list in my mind and one of these things did not belong. I had been wrong. So wrong. Too wrong.

"Please God," I whispered. "Let me find him. And I will try never to be sorry for small things lost."

I continued to run, left, right, left, calling my son's name at the glaring streetlights and into the inky night. I ran myself all the way home. My mother, who was babysitting the others opened the door.

"He found him," my mother said. "He got off at the wrong stop and he didn't see you so he managed to find his art class on his own. He's fine. Your phone was dead."

My husband found him. I collapsed on a chair and sobbed my relief into my cupped hands. Then my son walked through the door and I held him tight, so tight I never wanted to let go.

He had gotten off at the wrong stop.

Next time I would be far more careful.

Negotiating with Your Teen
Don’t Believe in Other Gods Versus God is One
Seeing Without Eyes
Why Shouldn’t We Eat Whatever We Want?
Comments
MOST POPULAR IN Family
Our privacy policy
Aish.com Is Looking for Great Writers